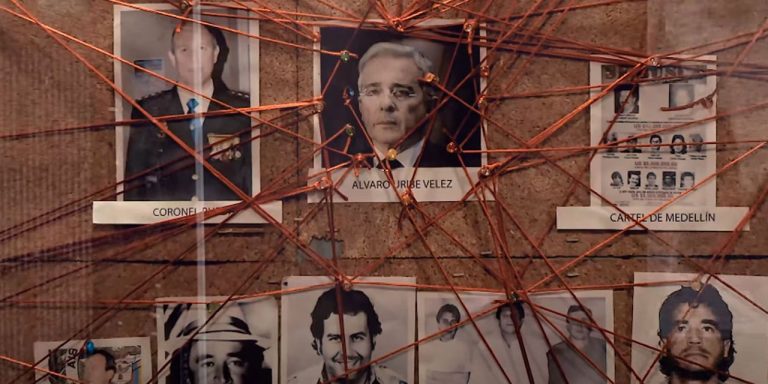 Colombia: The Butcher In The Background

Dona Apollo works as a copywriter and web developer for the professional writing essaywriterfree.net. She is interested in interview which give her an inspiration to write her own articles and short stories.

Interview with the Colombian journalist and filmmaker Daniel Mendoza

Daniel Mendoza is the creator of the popular Colombian series Matarife (The Butcher), which denounces the actions of former President Álvaro Uribe and others from the Colombian elite. He studied law, is a lawyer and criminologist. After publishing a novel, he turned to journalism. In numerous articles for the country’s major newspapers, he exposed the Colombian elite’s involvement with drug trafficking and the paramilitary forces. Since he himself comes from a wealthy family and was a member of the elite club El Nogal, he was able to observe these entanglements from an early age.

After being kicked out of this club, he founded the magazine La Nueva Prensa with Gonzalo Guillén. The articles published there were in turn the basis for the first season of the Matarife series, which reached more than 20 million hits on YouTube and even more on messenger channels such as Whatsapp, Telegram and Signal. The attempts by Álvaro Uribe and others to take legal action against the series have so far failed. All of the claims made in the series have been substantiated. It has been produced in Europe for over a year and should therefore be safe from further legal maneuvers by the ex-president. Daniel Mendoza currently lives in exile in France and is working on the third season of the series.

The major mobilizations in the context of the strike and the nationwide protests of the last few months have been diverse and decentralized. There were different leadership and organizational models. Traditional and alternative media reports in the country differed significantly. How is it that what happens on the streets is perceived so differently?

You have to know that Colombia is governed by an organized power apparatus or a criminal organization. The Colombian government not only has links to drug trafficking and paramilitarism, but rather embodies both itself. That is something different and difficult to understand because it has not existed anywhere before. The world should know that the Colombian government has been proven to export cocaine and that this is a murderous and paramilitary government. In this death machine, the media is a very important cog in the gears. In contrast to the independent media, the big media in Colombia do not fulfill their control function. Instead, they are agents of government pronouncements and thus part of the death machine. On the other side are the small and combative media like our La Nueva Prensa. We dared to make serious acts of the government public. The independent media are the only ones that exercise the counterpower function, without which there can be no living democracy. There can be no real democracy without the media, which exercise freedom of expression in this sense and denounce state grievances and human rights violations. Colombian “democracy” is a zombie that moves and exists but is not alive. She is an open-eyed zombie who can even speak, but he has no heart, head and soul.

Has there been manipulation in the media? Can you give us some examples?

Clearly, as I said, there was manipulation on the part of the state. Semana magazine did everything it could to keep the death toll and police assaults from leaking out, and so did RCN television. Manipulation arises not only through active action, but also through omission. And that’s what they do in the first place. They just leave out obvious, truthful, and unequivocal facts. They only talk about the stones: They show students throwing stones, one of whom suddenly throws in a disc. But they ignore the police who are shooting at the crowd, or the paramilitaries who are in the police force and also kill young people, that is an omission. The traditional media have kept barbaric and cruel things secret. For example, if they fail to report that heads were found in rubbish dumps and limbs of young people were scattered on the street, then these media are manipulating by omission. And there is also active manipulation. All you have to do is read magazines like Semana.

For example, the top candidate of the opposition, Gustavo Petro, was blamed for the strike on a front page. A terrible cover picture that shows him in front of the blazing flames, as if he were fueling the violence on strike, even though he has only called the youth to peace and love. In Colombia such a cover picture means not only a defamation, but a danger to life and limb.

What can you say about press censorship in Colombia, especially during the recent protests?

This is exercised by the organized power apparatus and takes various forms. All the lawyers around Álvaro Uribe follow twitterers and journalists: inside with ads that never come out. But they want to use this legal harassment to prevent freedom of expression, that’s one of their tactics.

The live digital information provided by the mostly young protagonists reached a large audience through the recorded videos. This digital activism made it possible for marginalized young people who previously had no voice to be seen and heard. Even so, some people complained that there was too much information about the events and that they no longer knew what to believe. What do you think of these opinions?

I don’t think there was too much information from digital media and new technologies. The films made it possible for the whole world to see live and directly for the first time how a genocide was carried out. In this sense, the digital media and the videos recorded with mobile phones are, on the one hand, a historical document of how a murderous state functions, and thus a contribution to historiography. But they also serve as legal evidence, which the CIDH (Inter-American Commission for Human Rights) has used for its statements from the start. It has become clear to the world and the judicial authorities that genocide has been committed against young people in Colombia. Now the world has to know, the world has to see, and we have to spread this truth. Colombia can only be saved by the whole world.

Attacks on journalists by the security forces were documented during the strike and protests. The harassment and the theft and destruction of material were aimed at preventing coverage of the social mobilization. In your opinion, what should be done in view of this precarious security situation?

We must denounce all of this in front of international bodies, but I believe that the foreign governments must also help and take a position, that is the only thing that is effective, because Colombia is in the hands of a criminal apparatus whose real ruler is Álvaro Uribe Vélez, the Lord about light and darkness in Colombia, is. He talks to the President on a cell phone, he talks to members of the government, to the prosecutor, to the members of the Senate, but on the other hand he talks to the Oficina de Envigado, one of the worst murder and drug cartels in the country Águilas Negras, a paramilitary group made up of active members of the military, reservists and hit men from the former Medellín cartel, as well as the Gulf cartel and the auto defensas Gaitanistas. So he’s talking to the paramilitaries and the Colombian drug trade. He has a direct and historical relationship with cocaine exports to Mexico through the Sinaloa cartel. This is Álvaro Uribe Vélez, this is the Matarife, the butcher.