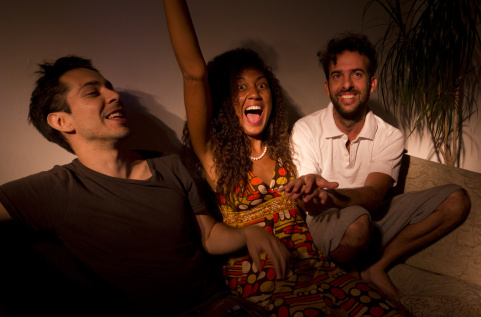 Buenos Aires Rap is a documentary which, as the name suggests, is about the rap and hip-hop scenes active in Buenos Aires today. But it’s more than that. Directors Diane Ghogomu, Segundo Bercetche and Sebastian Muñoz (pictured above) have taken hip-hop and used it as a framework to portray a snapshot of the variations of life in contemporary Buenos Aires. It’s a stunning piece of film-making, with characters as dynamic and engaging as the music they’re making, as well as beautiful shots of the city, from the streets of the provincial slums to the clubs in the city centre.

Buenos Aires Rap premièred at the Buenos Aires Independent Film Festival (BAFICI) in April, and the team behind the film are now looking to take it further afield, with money raised through a successful Kickstarter campaign. For more on the film, here is an interview I did with Diane, where we talked about the movie, hip-hop in Buenos Aires, and Afro-Argentinians.

How did this project get started?

I came out to Buenos Aires as an exchange student back in 2008 pretty much on a whim – I let my house-mate decide where we should spend our year! I was an African-American studies major, and so when I came here I began looking at the history of the African diaspora in Argentina and eventually wrote my thesis on how the culture of Afro-Argentine music represented Buenos Aires and their theories of race. While doing that, I came across the whole hip-hop scene that was thriving underground here in the city, not by any great anthropological work; just by going out dancing at hip-hop nights! I found that a lot of the people I met in this hip-hop scene had very interesting things to say about what it means to be Afro-Argentine today. When I returned to the states, I applied for a Fullbright scholarship to come back and carry out a more complete study of Afro-Argentine culture in the context of hip-hop. Once I came back, I met Sebastian Muñoz and Segundo Bercetche, who were exploring similar ideas. So we joined forces and now, nearly three years later, we have a film!

Can you explain a bit about the importance of hip-hop in contemporary Afro-Argentine identity?

Afro-Argentine identity is something which is going through a very interesting movement at the moment, in that it is pretty much the first time in about 200 years that this community is being recognised as a part of the wider Argentine people. For example, in the census that took place in 2010 ‘Afro-Argentinian’ was recognised as a possible ethnicity for the first time in these 200 years. Why the gap, you’re wondering? Because Afro-Argentinians had essentially been written out of the nation’s history following the wars of independence. They didn’t fit in with the European, white ideals of the nation-builders and so their presence was essentially ignored. In recent years we’ve had global anti-racism movements which have forced Argentina to change and to recognise this Afro-Argentine presence in their history and their contemporary identity.

One of the consequences of this historical gap is that today’s Afro-Argentine community, especially young people, don’t really have a reference point in terms of their cultural place in this nation. That’s where hip-hop comes in. When hip-hop was blowing up in the US in the 80s, and in Spain in the 90s, images of stars such as Public Enemy made their way over here, and the Afro-Argentine community was like, ‘oh! There I am!’ They began to see themselves represented as cultural and historical contributors, in a way which was not compatible with Argentine historical discourse.

So what’s the scene like here in Buenos Aires?

I think one of the most interesting things for me, as a North American, has been seeing the range in styles and how these different styles come from different aspects of US or Spanish hip-hop that have been appropriated from the videos they see on Youtube or wherever. There are a few main strands of styles that you can see, but then within them there’s a lot of variation. So you’ve got the people who are grabbing from the old school, looking at people like Public Enemy and the breakdancing crew Wildstyle, and they are like ‘ah, ok, so this is hip-hop.’ They’re seeing something which was born from dilapidated communities in the US, a product of Reaganism, where people are speaking out about their realities. So it’s that conscious hip-hop, people talking about politics in their raps, people who are more into the words than the production. But then you’ve got the younger generation, who are into their Lil Wayne and their Drake and for them hip-hop is about fun! It’s just good music that people have fun to.

One of my favourite parts from the documentary is when we were talking to Shaolin Dragon, who’s from Escobar in Buenos Aires province, which is a place where they don’t even have tarmacked roads. He was telling us, ‘people get mad at us because we’re into US hip-hop; because I’m into having my sneakers and my Timberlands and my hoodie. People get mad because we don’t talk about politics, we don’t talk about President Kirchner…what the fuck do I care about Kirchner? Last year when I wanted a shower, I couldn’t just turn on the tap, I had to heat up the water on the stove first. So that politics that you guys are talking about, I live that stuff. So I’m just going to talk about my reality; that’s my politics.’ With the documentary, we didn’t want to privilege any particular one of these approaches. We wanted to give a snap shot of Buenos Aires today, as reflected through the lives and music of these diverse artists.

What were the biggest challenges in making the documentary?

After nearly three years of working on this, thousands of hours of footage, interviews with literally hundreds of people, it’s going to be very hard to let go of the finished piece. We feel really responsible for our original idea for the piece, but also for the rappers who are in the movie, and we are very conscious of the public reaction to this, so it’s going to be very difficult to put it down, to face up to what we wanted to achieve. On top of that, we are hearing from a lot of great artists who we haven’t been able to include in the documentary; we have some rappers who are in the documentary saying, ‘Yeah this is great, but I feel bad because you haven’t included X or Y, they’ve done more for the community or they’ve been around longer.’ But the thing with this documentary is that we never set out to make a chronological story of hip-hop in Buenos Aires. This is not a competition about who you are or how long you’ve been making hip-hop. We had to say to these guys, what you are represents something for everyone, and that’s what we’re looking for. And so we have different representations of ideologies; different ideologies and different realities of life that exist in BA.

How do you see the future of hip-hop in Buenos Aires? Will it always be an underground movement?

That’s a tricky one. We have various people in the documentary who are saying hip-hop is just waiting for that moment when it’s going to blow up, and it’s going to be huge. But then we have others who say hip-hop in Argentina doesn’t need to blow up; hip-hop is what it needs to be right now. We have great rappers, we have people that are putting a lot of energy into what they’re doing and they believe and care about what they’re doing. You also have people saying that there is no need for hip-hop in Buenos Aires, because cumbia already covers the music from the ghetto. People usually think of hip-hop outside of the USA as music for marginalised people. Here’s what I think: I think it is going to take quite a time to construct a hip-hop industry here because of its underground nature, but also, more importantly, because there are a lot of divisions within the community which will make it very difficult for the movement to progress. We’ve noticed rivalries between groups, between barrios, and there hasn’t been much movement to build anything collectively, even something like a blog or a website. There’s a lot of emphasis on the rap battle here. Which is great, but there’s always an element of competition, which is very much part of the culture here, the society. So I think if we can concentrate a bit more on the idea of collectively building something lasting for the hip-hop community, then perhaps this industry can flourish. Hopefully our film can help with this.