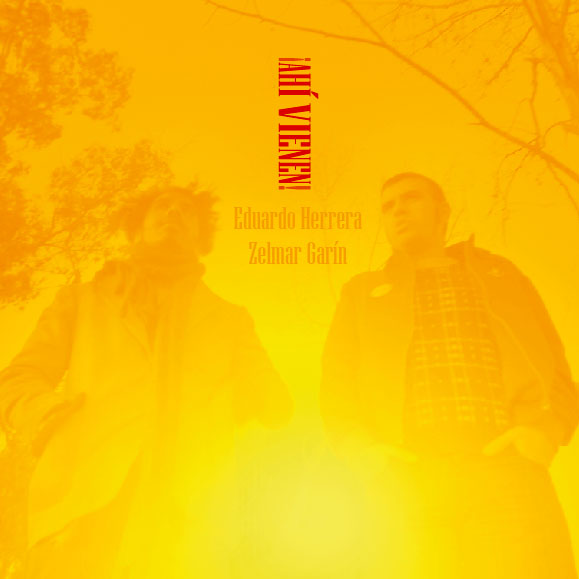 The delicate and peaceful guitar arpeggio, which leads the listener into “Oceano Jabali”, is the best possible prelude to the latest opera by Eduardo Herrera & Zelmar Garín.

It is, in a small way, a summary of the lyricism and the emotional intensity that impregnates the four-handed project. Ahí Vienen! is indeed a suggestive work, but at the same time so eventful and erratic, which can easily catch you off guard.

Next to its expressiveness, the main strength of the album lies in its artistry: the vivid musical coloratura, which inebriates and engages all along its 11 chapters. From the first tracks onward it is clear that Ahí Vienen! is the product of a long, intense and challenging project; but also a bright reflection of the creative harmony that links its authors.

Behind the album, there’s a 10 year path: an experience that the two musicians started off alongside the Argentinian Noseso label and which has led them to their first release together. Their debut is, as Herrera and Garín love to specify, “unclassifiable music”, a work in which dozen of styles come into contact with each other, mix themselves and give life to an open-ended musical plot.

It is hard to tell where the two artists are heading to; it is hard to foresee their next move. Listening to Ahí Vienen! you don’t expect to follow the course of a narration, or to identify a musical continuum, but to enjoy the details, to be amazed by the moments. That’s how poles-apart tunes, like the intimate whispering of “Milonga del Agua y el Fantasma”, the dark rarefaction of “El Fantasma” and the bewitched rhythm of “Gospel”, can smoothly follow one another.

Herrera and Garín are superb at bringing experimentalism in the everyday life. They express a popular and folkloric attitude, which is nostalgically revealed in “Mexicano Mamurry and Belgica”; but then they mask it, mould it and finally they transpose it: soaking every feeling in emotionally unstable conditions, as it happens in “Sinfin” or “Quizas Venus”.

As long as you are able to give up the quest for a down-to-hearth significance, or for a pragmatic meaning, you will find a sense of completion in the album’s eclecticism and its singularities. You will find fulfillment in the distinct instants, which compose an always-fresh ten years old project.

Ahi Vienen! is available for free download from Noseso Records