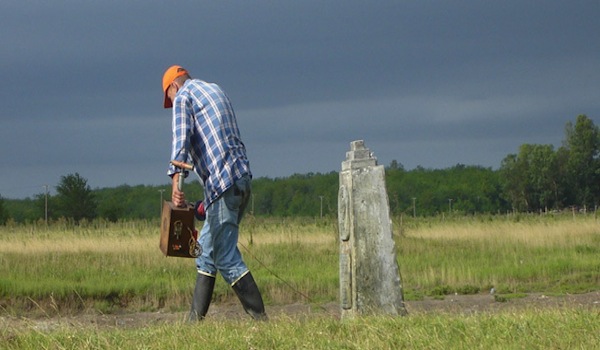 Historias Extraordinarias (Extraordinary Stories) is an exceedingly long film. And I don’t say that lightly: this is a movie with a running time of 245 minutes, a film so long it requires two intervals to be a manageable watch. Yet in spite of its eyebrow-raising four-hour length, Mariano Llinás’s multi-faceted feature is an ambitious and, at times, fiendishly clever film which plays with the viewer’s expectations of narrative development by presenting the viewer with not one, but three starkly different narrative threads.

The first concerns X (Mariano Llinás, the director), a character that has been sent to carry out some survey work but soon withdraws from normal society after being implicated in a fatal altercation mysteriously concerning a black briefcase.

Meanwhile, our second protagonist Z (Walter Jakob) has taken over a job at a regional office referred to simply as the “Federation”. Unaware of what his actual post entails, and having replaced a man called Cuevas who has mysteriously disappeared and of whom no-one ever speaks, X will become increasingly infatuated with Cuevas’s story and veer from the beaten path to further investigate his predecessor’s past.

Finally, we are faced with H (Agustín Mendilaharzu, the film’s cinematographer), another character who has taken up a job without a clue about what he is actually doing. He is charged with destroying concrete markers alongside a river, a task which becomes increasingly complicated and leads him to some unexpected places as the film rolls on.
Fittingly in a film where the lead characters don’t even have their own names, dialogue takes a back-seat during the feature; instead, the plot is largely furthered by an omniscient narrator who relentlessly describes the on-screen scenes in minute detail. This design choice leads to some quite brilliant scenes in the movie, where the feature comes to resemble a cinematic novel rather than a film.

One early scene of note sees a heated meeting taking place between work colleagues: although the viewer will not hear a large part of the discussion itself, they will instead gain an in-depth insight into the psyches of each of the on-screen characters. Complementing the close-ups of their furious, sarcastic or perturbed expressions, the narrator will quite literally bombard the viewer with both necessary and superfluous information about them. Not only does this make for some very humorous revelations, it also plays with the viewer’s expectations: as spectators, we are not only tasked with interpreting what we see on screen but also what we hear off it – as such, the film offers a clever union between story and form which tests viewers who are accustomed to interpreting narrative developments through character dialogue.

The fact that the film is divided into chapters with their own respective titles further emphasises the novelistic aspirations of the feature, openly reflecting the form of a book in which disparate stories occupy distinct sections of the narrative but also somehow function together as a unified piece.

This is in no small part aided by the exquisite cinematography, which constantly changes to match the moods and tone of the revelations in each story. In X’s detective-inflected tale, scanning shots of newspapers and montages of his hypotheses about the situation he finds himself in do a great deal to evoke his troubled thoughts and his obsessive demeanour at a time when he feels he’s losing control. When the confused Z is observed in his office early in the film, documentary-style hand-held shots are interchanged with close-ups which frame his troubled expression. Meanwhile, H’s journey along the river will be dominated by establishing shots which dwarf the character and, thereby, emphasise the serenely expansive surroundings he finds himself in. In a film as long as Historias Extraordinarias, cinematographic variation is a must, and it was refreshing to see a plethora of styles showcased throughout the four-hour feature.

In turn, Gabriel Chwojnik’s masterful soundtrack (the first part of which is available to listen to here) offers even more depth to the lengthy feature. Populating the spaces left open by the seldom breaks in narration, Chwojnik’s musical direction is as varied as the cinematography: scenes in the pampa are invariably accompanied by tunes inspired by Westerns; other scenes are populated with brilliant cumbia tunes. Yet whatever the style may be, the music always matches the mood perfectly, evoking the feelings of the characters depicted on-screen (and described by the narrator off it) to great effect.

As is to be expected from a four-hour feature with three interwoven stories, the viewer will often find themselves at a loss to remember exactly what is going on in the film. The characters’ tales will often become blurred in the memory of the viewer, forcing the spectator to focus intently at all times during the film to keep track of each of the respective stories.

Regardless, the innovative use of an omniscient narrator, the stylish cinematography and the striking soundtrack make for a thoroughly compelling feature which largely maintains the viewer’s interest throughout the 245 minute running time. It may take an afternoon to watch, but Historias Extraordinarias is an experience which is more than worth your time.

Historias Extraordinarias was screened as part of the East End Film Festival.