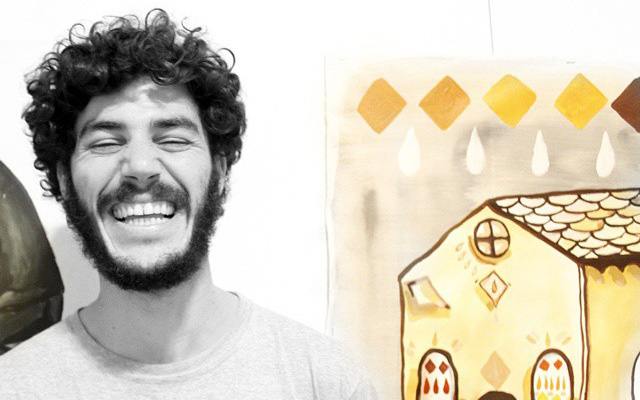 Interview with a Street Artist: The Many Faces of Pol Corona

As Pol Corona walks down the street, he receives salutations from many neighbours in the working class neighbourhood of Barracas in the south of Buenos Aires. Corona knows many of his neighbours by name and he stops for a bit of friendly banter before continuing on. The Franco-Argentine street artist is a critical character in the ever growing art scene who has also taken on the role of liaison between community and artists.

He is connected as the unofficial curator of one of the most up and coming neighbourhoods in Argentina for street art. Aside from painting, he also helps to bridge the gap between the neighbours and artists, by procuring walls and facades for incoming artists to intervene. Corona also works with Sullair, a company which has created its own culture department, heavily involved in sponsoring the aesthetic revitalisation of the neighbourhood. I sat down with Corona in his home/studio to discuss his past, present and future within the rapidly growing street art movement.

Where was your first experience with street art?
I was born in the South of France and as a boy I moved to Madrid where I was raised. My first experience painting graffiti was in in Madrid in 2001.

When you first began to paint in the street, what style of graffiti did you paint?
When I lived in Madrid I was doing more classical graffiti, estilo Madrileño. In the beginning it was pure letters, bombing, graffiti, and that sort of thing.

Corona’s traditional graffiti in neighbourhood of Constitución (Photo by Corona) 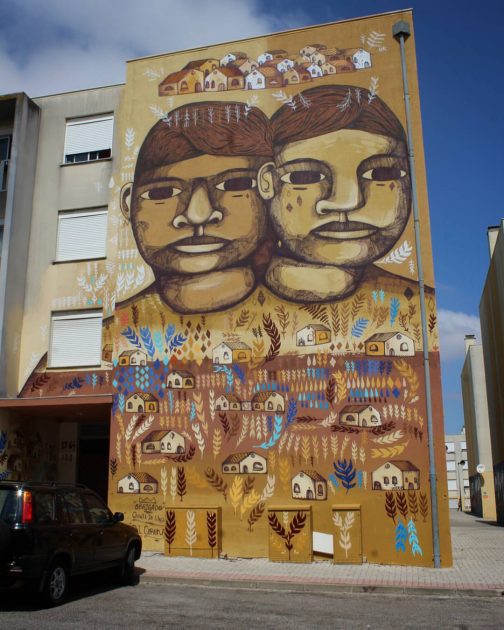 “The neighbourhood and the world”, Lisbon, Portugal (Photo by Corona)

Did you ever have problems with the police as a result of painting in the street?
Yes, when I was very young. I was painting in a square in Madrid and they arrested me, but because I was young they took me to my house. Later I also had to run from the police a few times, not a lot, sometimes.

When you are thinking about what you are going to paint, how is the process? Do you think about the wall, the colours and plan a lot, or is the process more organic?
The process is more organic. I go with my idea and according to the wall I look at what I am going to do. In general I don’t even take a sketch. 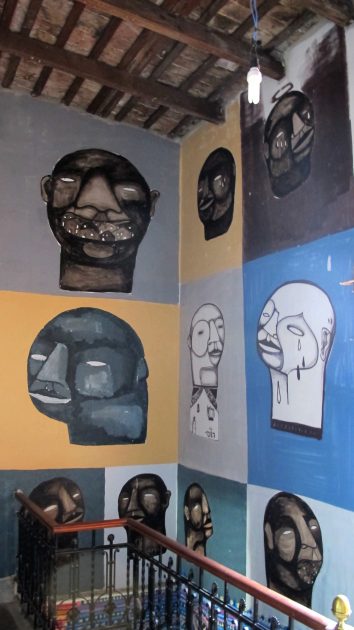 The many faces of Pol Corona (Photo by Corona)

It is clear that your style is very individual: you create your worlds using subjects that are repeated often; faces, houses, animals, trees, etc. Have you always painted those themes, or is it something that has progressed over the years?
I always painted faces ever since I began to draw, but later they began to change. The face that I paint today is different than the face that I painted eight years ago, but they are all conjured by the imagination. With the houses it is the same, at one time I started to draw and paint houses and incorporate the houses with other elements and then compose them working with the elements that I have. The faces are very repetitive. They are almost always present, but changing with time. 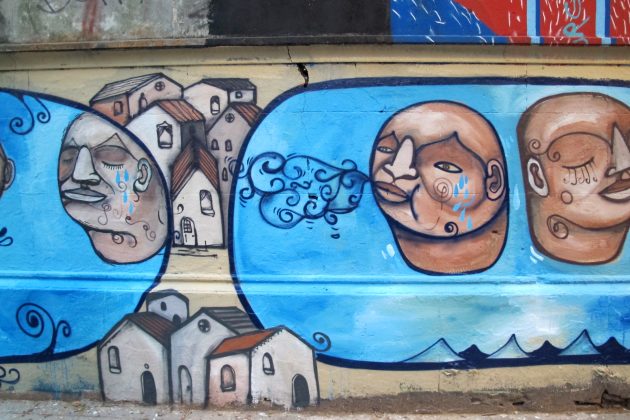 Is there any particular influence from your past that inspired you to paint the house?
Not in particular, it is strange how the things come up. I came up with the idea for the house and later the little towns. The symbol of a house is very human, the need of a habitat, what is cooking inside, the love that a house can give, what makes a house a home. I like to repeat that. I don’t know what the influence was, but I was born in a home, I consider that I had a nice childhood in which the environment of the our home was always good. Maybe that’s why, but there really isn’t a lot of psychological analysis of what I paint. Maybe the houses look similar to the houses where grew up in France. All of the houses that I paint are always the same, but with different details; the orientation is changed, the facade faces one way or the other, they have more or less windows, if the roof is tile or sheet metal, but they are all sisters. How does the creative process change when you collaborate with other artists?
There are different ways to share a wall with someone else. One is that each artist does their own thing, each artist takes half of the wall and each does whatever they want to do and then the background unifies the work. The other way is a bit more creative, where you cross the line a bit more and go into the drawing of the other. You always talk about what you want to do and what materials there are when you share a wall with someone. 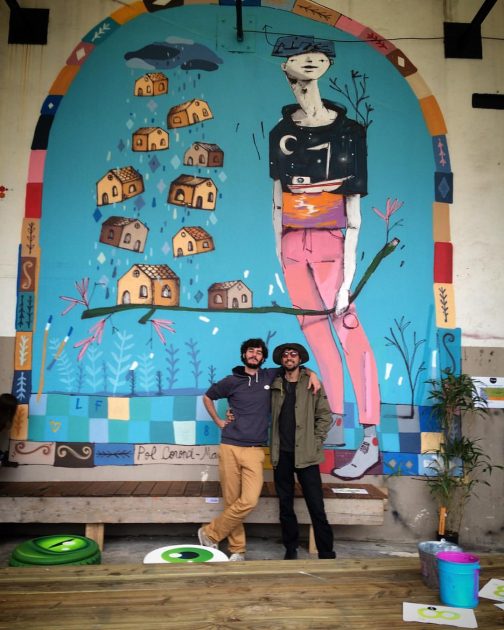 Collaboration between Corona and Mart Aire (Photo by Corona)

In all of your collaborations the work seems very well planned. For example when you work with Mart Aire both of your styles are somewhat similar, using a very fine line. On the other hand, you have collaborated with El Marian, who has a very different style than your own. Does it make it harder to collaborate if the other artist has a style that is very different?
I like to paint with someone whose style is very different because the two can mix very well. With Mart I have a similar style, or way of painting, but it is also different. You are influenced a lot by who you are painting with. When I paint with Mart I paint with more colours than when I paint with El Marian. Maybe I blend better with Mart to make the work more flexible. El Marian works a lot with photographs, so I usually intervene what he does after. He paints and then I go painting on top, but the process changes depending on who you are with. 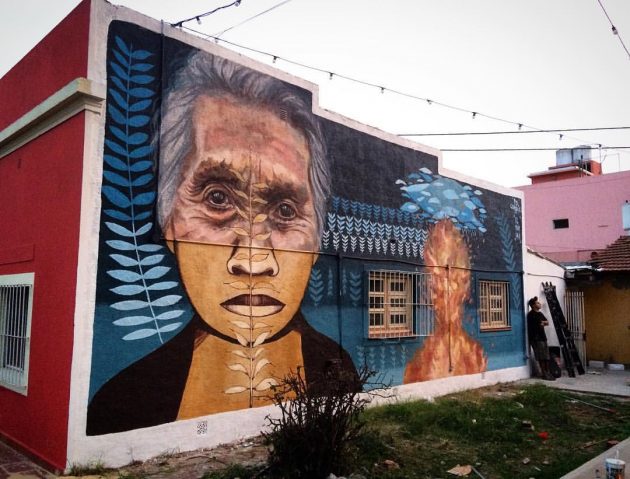 Collaboration with El Marian in Hurlingham, Province of Buenos Aires (Photo by Corona)

In the neighbourhood of Constitución you painted something atypical of your style, a mural of Gauchito Gil. Why did you choose to paint the Gauchito in a more traditional style? What does Gauchito Gil represent for you?
I painted that Gauchito because someone in the neighbourhood asked me to paint it, but basically I copied an image. It’s curious because there are people who go to pray everyday to the Gauchito, it’s a religious image. They leave wine, cigarettes, and other offerings. I don’t know too much about the story, but Gauchito is a saint of the people. What I like about the Gauchito is that he is a people’s saint and he is something really Argentine. Differently than many street artists in Buenos Aires, the content of your art doesn’t seem to have a political message. Do you agree with that statement?
Yeah I think so, the images that I paint are not directly related with any political protest and they don’t have political content. Here there is a very strong tendency related to the Latin American critique. But I do believe that the act of painting in the street is a political act. Politics are present in many situations and many contexts. If the image that I generate isn’t directly related with a political activity that is because I don’t touch on themes of that nature, but I am convinced that every action in the street is political. 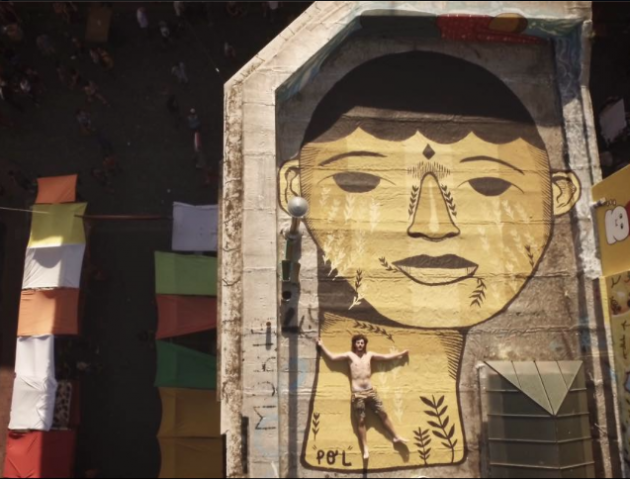 When did you begin to work in the neighbourhood of Barracas?
I began to work in Barracas four or five years ago painting with Mart on the facade of Sullair. 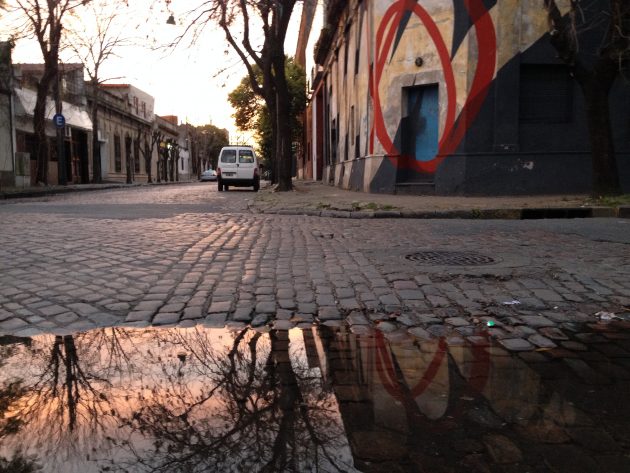 How did you begin to work with Sullair?
It’s a bit of a long story, but basically I met the people in marketing and we started to work together. They were interested in painting electric generators and intervening murals. What projects do you have for the future?
For the future I would say that there are lots of things that are starting to go smoothly with time. The first big thing that is going to happen is that we are going to present a new book that we are collaborating on with Sullair. In parallel with the presentation of the book, we are going to have an exhibit in my house/studio in Barracas. We are going to prepare works from all of the artists who have participated in the book and they are going to come to paint. The studio is another project which will become an open studio. I am also thinking of doing a residency in 2017 to invite other street artists to have a place to work, to sleep and to link them into different situations. They could be working in the street, preparing an installation to later take to the street, but everything will be oriented towards the neighbourhood. The invited artist will generally come from outside Buenos Aires to work for a month or two, continue developing their technique and ideas and put them to use in the neighbourhood.

When are you going to be painting in the street again?
I really want to, it has been awhile since I last painted in Buenos Aires. I am dying to paint again, but really I don’t know… soon.

Since I sat down with Corona, he has been very busy. He has intervened new art in Barracas, painted in La Boca with the event Color BA, and in the TRIMarchi design convention in the coastal city of Mar del Plata. The book that will be released is called Siete Murales which is being sponsored by Sullair Cultura and will be released in the Centro Metropolitano de Diseño in Barracas on the 19 November, 2016.