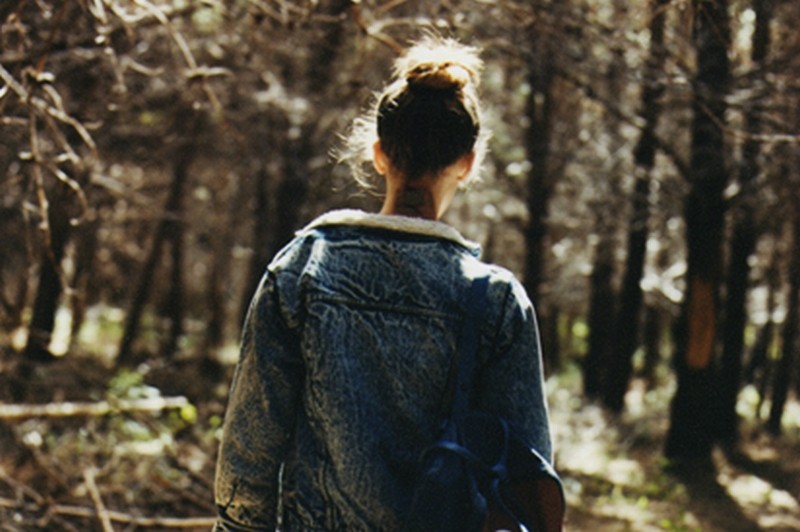 A reflective piece on getting lost and the delicate space between life and death, Jazmín López’s first feature film, Leones, which debuted at last year’s Venice Film Festival, gazes alongside five Argentine friends wandering freely through a mysterious forest.

Leones opens with a bewildering and beautiful shot of Isa, a young 20-something, walking alone along a shaded pathway surrounded by trees. On edge and seemingly lost, she eventually runs off into the distance, around a turn, and suddenly out of sight as the camera remains transfixed in the forest. Isa (played by Julia Volpato) is the film’s protagonist, but arguably not its primary focus. Sleeping next to a tree, she then wakes up and finds, or gets found by, a group of four friends (three guys and one girl), who proceed to curiously navigate along tree-lined paths, grassy fields and a small lagoon. With no knowledge of why they’re there or how they got there, one can only be vulnerable to any piece of information that can even help to suggest what, exactly, is going on.

As they chatter playfully and play word games, López’s enigmatic characters helplessly opt for a scattered wavering of emotional expressions and interactions, walking inside the unknown with both delicate fear and unguarded awe, while often sharing exchanges of both insult and intimacy during the process. Just as the camera almost continuously remains in motion (if not tracking behind moving characters, then swirling around them), the kids stay active too: talking about a world with nothing, questioning the difference between gods and humans, bickering about what to do and where to go, eating flowers and engaging sexually with one another. But mainly, they just meander with a puzzling audio recorder that doesn’t function properly. At some point it becomes clear that there is no true agreement between these five friends; nothing is known, nothing is understood beyond doubt, and all exists in a state of maybe between them. It’s all a game, and everyone’s playing. They toy with one another while the forest (and their reality) toys with them, getting lost and accidentally revisiting places they believe they’ve seen before.

Very quickly on, one gets the sense that this is not a film to be simply watched, but rather thoughtfully experienced. The film is fragile and it demands patience in the similar way that brings to mind Lucile Hadžihalilović’s Innocence, Gaspar Noé or even Béla Tarr. Shot in 35mm and using only natural light, López produces an organic and natural cinematic look that converses harmoniously with the many depths of greens that the forest paints. Cinematically, Leones hopes to immerse the viewer in a place of possibility, and the use of sound proves to be vital in this endeavour. Both natural and ambient sounds demand a large space from which to breathe the alluring energy of nature into the film.

It’s precisely the way the camera moves through space, though, that gives the forest its dream-like quality. Floating between trees, leaves, and bodies, López’s shots are consistently on the longer end, with each composition almost constantly in a state of flux. Her ominous gaze (death always seems to be lingering around the corner, if not in the edges of dialogue) frequently becomes seduced by the forest, allowing its travellers to disappear into the distance. And like the forest, the camera itself is just as much a character as the five kids, if not even more so. López utilizes the indubitable power of nature to play her own tricks, manipulating time and space through the speeding up and slowing down of shots, as well as the execution of precise, careful choreography. Moments of play with the viewer are easily some of the most pleasurable moments in the film. What’s impressive about how Leones plays with the passage of time is that it manipulates it within single, unbroken, uninterrupted shots. A number of gorgeous one-shot sequences — such as a slow-motion imaginary volleyball game that Isa watches — illustrate López’s eye for visual authenticity and imagination. As beautiful and precisely composed certain moments can be, however, it’s clear that the execution of camera control proves inconsistent in other brief moments.

As the film floats along, the five characters find themselves returning to the past in different mental states, states that provide clues as to the mysteries that lie inside and between them. Through fleeting and intentionally unfocused – although sprinkled with hints and puzzles – dialogue, their emotions float away, just as the camera does, unhinged to itself and more interested in the textures of a powerfully pulsating and flickering wilderness. Isa, the film’s primary human focus, stands out from the rest. As the most sensitive, she’s both the one that worries and the one that the others worry about; they remind her to be careful, hide information from her, and try to protect her. She expresses her fear (the only one to do so), but at the same time “enjoys without understanding” rather freely. On the other end, a sense of anxiety and aggression emerges from the obnoxious Arturo (Pablo Sigal) — the boy that “would kill for Isa” — who finds a loaded gun at one point and decides to keep it with him.

The characters and their relationships are rather ambiguous, and as they share concise and sometimes illogical exchanges, as well as lengthy moments of silence, they become understood primarily through their fleeting ideas and sporadic expressions and less through their sustained emotions, which, apart from Isa’s, are inescapably hyper-transient. That’s precisely what can be frustrating about some of these characters, as you can’t tie them down to anything, you can’t expect anything from them, and you most certainly can’t build any precise understandings of their relationships based around clear expectations. They lie and deceive one another unapologetically, sportively and lightheartedly, and yet simultaneously show spouts of affection, each living deeply inside their own heads, far from the camera’s. However, it’s precisely this inconsistency in the characters that harnesses such a secured tone of unknowingness and mystery throughout the piece, and also allows López to touch on deception in its dealings with the blurriness of reality, a theme addressed from the onset.

While Leones is a thoughtfully paced, textured art film that experiments poetically with the cinematic language, there’s something missing in its emotional impact, which is tied to this sacrifice López makes in character development. This becomes especially apparent during Isa’s unfulfilling and mildly affecting emotional outpour inside a BMW near the end.

Emotions aside, it’s the tender way in which Leones is shot that makes it a pleasurable and worthwhile watch. It seems as if the narrative structure and content take a back seat to a visual strategy, a strategy committed to conveying an emotional state, a particular way of perceiving space and time. And as time passes rather bizarrely, what’s important is that they’re lost, and other than searching for something — a house, the sea, information from a malfunctioning tape-recorder (all of which only at moments prove to be urgent) — they’re just sort of, well, existing within the unknown. Being lost in this film is less about what happens to these characters as it is about cultivating a state of openness and vulnerability from which the viewer can experience how time can pass in the imagination. In other words, Leones isn’t a film reliant on plot points and narrative action. It’s a dark yet playful exploration of the passive act of not knowing, as well as the complicated and fragile marriage between beauty and confusion; what it means to live (or die) lost in time and space.

Leones is screening on July 4th as part of the East End Film Festival in London. More information here