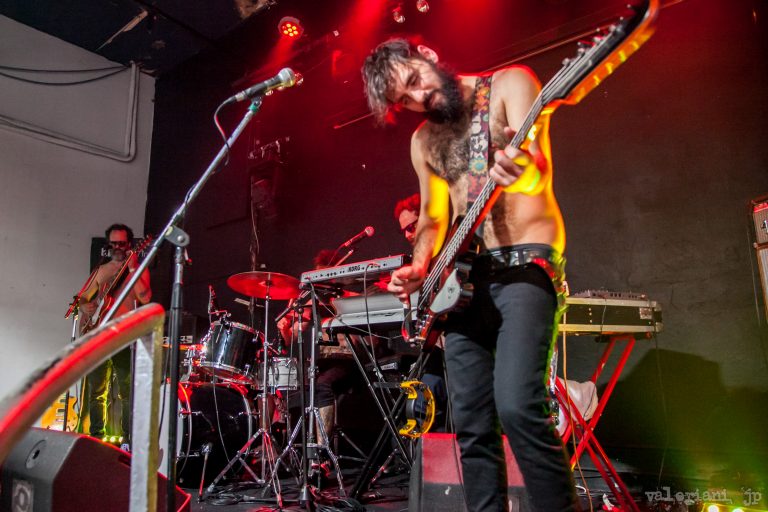 Fiero find themselves in a Buenos Aires underground scene that has become more restrictive in recent years, following the Cromañon tragedy in late 2004. A fire claimed the lives of 196 concertgoers and revealed a disturbing level of negligence from the municipal government. New regulations were put into place and dozens of independent venues closed. Those that remained had to charge more to deal with the new regulation, and the subculture shifted. Ticket prices went up, as did the cost of beer. Bar managers needed acts that were clean-cut and well packaged, bands that could fill out the necessary paperwork and check all the boxes. They wanted bands with a script and structure, or in other words bands that were the antithesis of rock and roll, bands that were the antithesis of Fiero.

Fiero started in Brazil, when someone asked an Argentine jamming on his guitar and looper setup for the name of his project. That Argentine was Mariano Abelenda, nicknamed Flaco, the founder and soul of Fiero. Flaco explains that he wanted a Lunfardo term for the band name; something short, sweet, and “reo, como nosotros” (rough, unrefined, like us). He settled on fiero, which translates to wild or savage and is associated with criminality.

In the years that followed, the sound evolved. Flaco joined forces with cello player Pablo Cartaginese, and produced the band’s first project, the free-ranging and experimental Trueque en Pelotas in 2011. They then added drummer Sebastian Corso, a keyboard/synthesizer player Sergio Vasermanas and recorded a live album Sesiones Living Club in 2012. In 2013, bass player Juan Batista came along and the group produced the album Vermú en Pelotas in 2013. Two years later Pablo left the band and the current four-member iteration produced their latest album Sopa de Perdedores in 2015.

To Flaco, however, through all of the changes Fiero remains the same because, as he puts it “Fiero is an emotion, a lifestyle.” Musically they’re an eclectic mix of blues and jazz-inspired rock with added layers of electro-funk pouring out of synth riffs and loops. They exist for their live shows. You won’t find the band in a closed-door practice session; because when Fiero rocks, everyone is invited. During a live show, the band and the audience feed off of each other and at times there is no distinction at all. Bati in particular, the freewheeling, happy-go-lucky bassist, has a habit of jamming quite literally in the middle of the crowd. During the Fiesta Fiera in September, he had the entire crowd get low to the ground with him, while the rest built up the tempo slowly, slowly, more, more… *BAM* everyone up, jumping and yelling. The band is there for the same reason as the fans: an unscripted party (though the Spanish term ‘locura’ fits better here). Fiero cultivated their entire sound based on driving these locuras and then raising the stakes for the next one.

Their recorded work does not do justice to their live performances. A recorded album lays out songs played a certain way and in a particular order. However, the true Fiero experience is off-balance and unpredictable. You might think you know when Seba is going to snap off a drum roll, bringing the guitar and bass back in the mix; you might be wrong. They leave the crowd suspended in moments of raw anticipation that forces them to come back for more. Off of this reputation, Fiero have built a core following throughout the country. They can’t exist strictly in the confines of Buenos Aires, so they thrive outside of it, constantly on the road looking for the next locura.

Despite its’ constraints, Buenos Aires remains the biggest and most important stage in the country, so Fiero play in the capital, but always on their terms. The last show in Buenos Aires was at the renowned Niceto nightclub in Palermo where the band and crowd partied until nearly 6 in the morning. During the second set, a crate of cold beer was passed around the crowd in recognition of the incredible performance, on the house. Afterwards, staff from the bar said that it was the best show they had seen in over 10 years. The gesture did not go unnoticed by Flaco who remarked, “That never happens and it says something. These people, they see shows every night, night in and night out, so it means a lot. Fiero might not be a band with a lot of ‘hits’, but we can put on a show like that. For me that’s better, that’s what Fiero is about.” Nearly 13 years after the Cromañon tragedy, Buenos Aires is reclaiming some of the raw edge that characterized the underground scene of the 80s and 90s; and the unrefined, impulsive Fiero are leading the charge.

Listen to more Fiero on Bandcamp and Spotify.