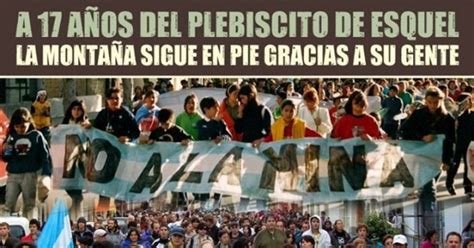 New Book ‘On the Track of Dirty Gold’ Follows Stories of Environmental Resistance.

In genre-bending Dirtigol, Luis Manuel Claps sets out to document the ‘Esquel effect’, the wave of organised resistance to large-scale industrial mining which spread across Argentina and beyond following a 2003 referendum on the installation of a gold mine in Esquel. Dirtigol, an alter-ego of the author himself, sets off in search of similar movements from the south of Patagonia as far as the Amazon, where he meets everyday heroes of resistance, retells their stories and recounts his own adventures. This article is re-posted courtesy of Latin American Bureau, the original article can be found here.

‘The upheaval in Esquel had many repercussions and similar movements were documented elsewhere. Law 5001 of April 2003 prohibited open-pit metal extraction in the province of Chubut and the resistance spread. How to reach all the no a la mina movements in Latin America?

This is the challenge Luis Manuel Claps poses in Dirtigol: en la ruta del oro sucio: to document the so-called ‘Esquel effect’. This was the wave of organised resistance to large-scale industrial mining which proliferated in Argentina and beyond following a local referendum on the installation of a gold mine in the town of Esquel in 2003. Over 80 per cent of voters rejected the mine, forcing the company, Meridian Gold, to suspend its operations indefinitely.

In Dirtigol, the eponymous protagonist – an alter-ego of the author – sets off in search of similar movements from the south of Patagonia as far as the Amazon. The journey takes him through five countries, meeting with community leaders, activists and farmers; attending community assemblies and academic conferences; and speaking on local radio stations.

Dirtigol visits Argentina’s mountainous northwest, the towns of Famatina and Chilecito in La Rioja, where the local resistance has repeatedly prevented mining companies from getting a foothold, despite the presence of lucrative gold deposits in the Cerro Famatina. With strategies including marches, meetings, talks in local schools and, crucially, roadblocks, these two communities managed to expel four different companies in nine years between 2005-2014.

He also reports from communities in Chile and Argentina which mobilised against Barrick Gold’s binational megaproject Pascua Lama. Ultimately, Pascua Lama never made it to the extraction phase, having been plagued with social, environmental and financial issues throughout. It now appears to be dead – for the time being at least – with the Chilean courts ordering the project’s ‘total and definitive closure’ on environmental grounds last year. For the affected communities it was a landmark victory and resistance on both sides of the cordillera was key.

And Dirtigol goes further afield, to Tambogrande in Peru, an agricultural community which ran the Canadian mining company Manhattan Minerals out of town in 2002. Manhattan were planning to install an open-pit goldmine which would have required relocation of around half of the town’s 16,000 residents. In response, the people held a local referendum in which 98% voted against the mine. Occurring less than a year before the referendum in Esquel, it was the first vote of its type on mining in Latin America and has been similarly influential amongst activist groups and communities threatened by the industry.

Not all the accounts of mining conflicts in the book have happy endings. Dirtigol visits Argentine provinces such as San Juan and Santa Cruz, where the provincial governments have promoted mining very aggressively and local opposition has been much less successful than elsewhere in the country.

He also goes to Cajamarca in the Peruvian highlands, home to Newmont Corporation’s Yanacocha, the largest goldmine in South America. Yanacocha has brought destruction on a massive scale, while opponents have been on the receiving end of violence from the police and private security firms. Several have been killed, while many others have been criminalised and have faced costly and stressful legal battles for defending their right to a healthy environment.

However, even in this most acrimonious of cases, the resistance has still chalked up some major victories. Conga – a $4.8 billion gold and copper project just 24 km from Yanacocha, also belonging to Newmont – has been on hold since 2016, with the resistance from local campesino communities crucial in forcing the company to withdraw.

Claps was able to undertake this journey thanks to his work as Latin America Editor at Mines and Communities (MAC), a network of organisations and individuals set up to demand greater transparency and accountability from the mining industry. MAC, which has just celebrated its 20th birthday, maintains a database, currently home to around 14,000 articles on mining from 171 countries.

This long experience working on mining issues also provides the book with many historical digressions. One such detour delves into the history of Rio Tinto and its cosy relationship with the Nationalists in Spain during the Civil War – the company even provided raw materials for German re-armament at Franco’s behest. Another touches on Anglo American and its use of international subsidiaries to continue extracting mineral wealth from South Africa while dodging the sanctions imposed on the apartheid regime.

But Dirtigol is neither simply a catalogue of Latin American mining conflicts, nor a historical work. It’s also a piece of travel writing, which incorporates some fictional elements. There are accounts of Dirtigol having lunch alone in a restaurant ‘with a photo of a naked woman hanging on the wall’, having barely spoken to anyone in days; references to hostels, hitchhiking and hangovers; even, in Ecuador, an ayahuasca ceremony with the Shuar indigenous people:

‘His jaw trembled and his whole body shook with the mareación. Though he no longer knew what the plants were, they asked him: where do you come from? His eyes were squeezed tightly shut, but nature’s changing geometry was visible behind his eyelids. He saw the two snakes.’

Though Dirtigol is a playful, eclectic work, there is a serious undercurrent to it. It shows how the collective belief in the ability to determine what one wants for the place where one lives can produce results. This means communities can find solutions to their problems together, even when confronted with opponents of great wealth and power. Claps used to be a member of a missionary group in his home province of Chubut, and there are several references in the book to the work of church groups in the resistance to mining in Latin America. ‘I think there’s an element of faith to all activism, although the faith in money often overrides any other,’ he says.

The importance of this collective belief is clear in a description of a meeting of the local assembly in Famatina, in which the headteacher of a nursery school reveals she has been approached by Barrick Gold and offered assistance in return for her complicity:

I really need to paint the nursery, I need a television, I need to equip the kitchen, what should I tell them? How did you respond? they asked her. That I would discuss it with the local assembly… Then, putting down his glass of wine, a man in a striped shirt stood up and said: I’ve got a television I can lend you. The headteacher turned her head so as better to hear him and the olive fell from her mouth. I can help with the painting, said someone else, my brother-in-law’s got a paint shop, we’ll see what we can do. Not one space is left to the company without a fight, wrote Dirtigol, underlining it in his notebook.

And this fight is constant: while the threat posed by the mining industry tends to come and go, rarely does it disappear entirely. Even in Chubut, where the no a la mina movement has been so influential for almost two decades, communities have once again had to mobilise over the last year to resist a ‘zoning’ proposal which would permit industrial mining in the meseta area of the province. This would, in theory, make it possible for Pan American Silver to develop their massive Navidad project, thought to be one of the largest untapped silver deposits in the world.

Nonetheless, even where legally it is possible for companies to mine, community resistance can still prevent the companies from ever getting a drill in the ground. As Dirtigol says, ‘In my province, the mountain still stands thanks to the people.’

Dirtigol: en la ruta del oro sucio is published by Remitente Patagonia. You can order an e-book from Amazon while print copies are available from Libreria Oñate in Rawson, Chubut, Argentina. An English translation is forthcoming.

Luis Manuel Claps lives in Brooklyn with his wife Ximena and their two daughters. You can read his blog at https://orosucio.info and consult the Mines and Communities website at http://www.minesandcommunities.org