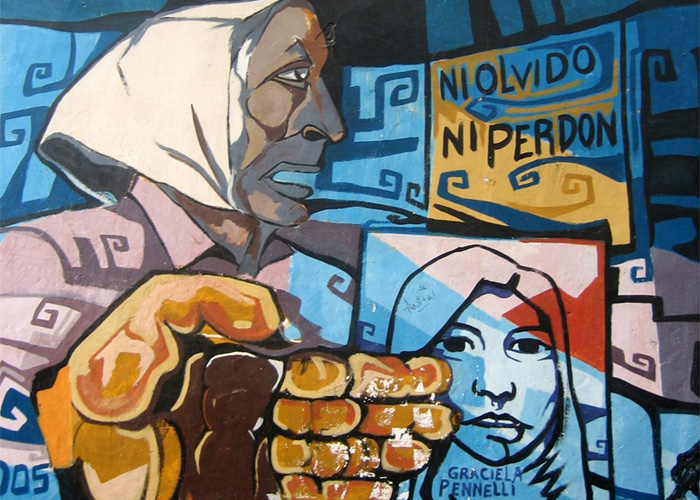 These Trees Are Made Of Blood

Walking through a smoky haze, surrounded by small café tables, brightly coloured light bulbs and balloons, accompanied by rolling, tango-tinged cabaret music I entered the performance area for Theatre Bench’s These Trees Are Made Of Blood. The performance, created by Amy Draper, Paul Jenkins and Darren Clark, provides a shimmering yet gruesome portrayal of the events during and after the Argentine military dictatorship from 1976 to 1983, using the backdrop of an aptly named Buenos Aires cabaret ‘The Coup Coup Club’. The cabaret tells the story of Ana Martínez (Charlotte Worthing), one of the tens of thousands of students and alleged dissidents ‘disappeared’ and tortured by the military junta.

The military dictatorship came to power in a coup led by Jorge Rafaél Videla, who implemented heavy censorship, disbandment of trade unions and military persecution of any suspected dissidents. This involved the creation of thousands of secret detention centres where up to 30,000 citizens were imprisoned, tortured and killed under horrific circumstances. Mothers searching for their ‘disappeared’ children patrolled the Plaza de Mayo of Buenos Aires in front of the presidential office, La Casa Rosada, in protest and in the hope of explanations. The search for lost grandchildren stolen as babies by the dictatorship still continues today. Initially, we were lulled into a false sense of security by magic tricks, upbeat and sarky lyrics, latex costumes and a glittering cabaret dance by Madame Butterfly. As the disappearing acts began, the sprightly musicians and slapstick military chiefs became sinister, the cheery music producing a sickly contrast to the growing despair of Ana’s mother, Gloria. The dad-jokes and the snorts of laughter were replaced by an uncomfortable tension, as the actions of the self-proclaimed ‘father’ of Argentina were revealed. Chirpy songs such as “La Casa Rosada” made explicit reference to various torture techniques, and The General (pictured below), who represented the dictatorship (Greg Barnett), reminded the audience that dissident ideas were ‘the most resilient parasite’. The cast repeated various key scenes prior to Ana’s kidnapping, showing the different layers of memory and it’s fluid nature, as the General said to Gloria: “You tell me your truth and I’ll tell you mine”. This critique of official and unofficial history, combined with parodies of the involvement of the C.I.A. and the Catholic church made for a highly politicized performance. Video clips from the real Plaza de Mayo protesters, and poignant mock-recordings of victim’s testimonies were used to create an intense sensory experience and the constantly changing mood was overwhelming, with the music ranging from full-on cabaret swing and gypsy jazz, falling into sad and nostalgic songs such as “The Ghosts of Buenos Aires”.

The brashness and charm offensive of the cabaret glitz, set against devastating scenes of corruption, violence and irredeemable loss touched a nerve six months on from the 43 students taken from Ayotzinapa in Iguala, Mexico. The underlying history reflects so many other atrocities committed by dictators or corrupt governments in Latin America, whilst the cabaret elements and the ‘bad jokes’ indicate that the show must go on. The hope and love shown by Ana and Gloria provided a more human narrative, cutting through the cabaret with more traditional-scripted scenes, which made for an unnerving, yet absolutely captivating portrait of the atrocities committed in Argentina.

All photos by Darren Bell

These Trees Are Made Of Blood is on at Southwark Playhouse from 18th March until 11th April. More details are available at southwarkplayhouse.co.uk/the-little/these-trees-are-made-of-blood