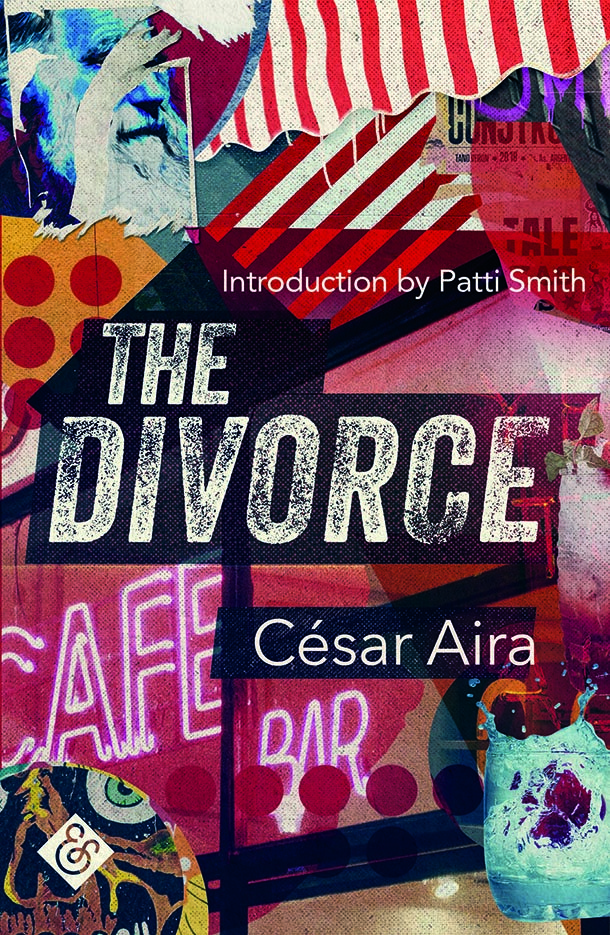 This Isn’t The End: ‘The Divorce’ by César Aira

César Aira’s serpentine novel, The Divorce (released as El Divorcio in 2010, now translated into English by Chris Andrews), begins and ends, as the title suggests, with separation. Kent, the novel’s narrator, has just split from his wife, and decides he needs some time away from her and the custody proceedings related to their young daughter. He heads down to Buenos Aires, where he spends his days in the hip Palermo Soho neighborhood, wiling away days in conversation at El Gallago, a restaurant whose tiny Spanish octogenarian owner will play a decisively ambiguous role in the unfolding narrative. As the summer months wear on, he finds that life in the Argentine capital has rendered him “absent from himself”.

Kent hails from Rhode Island—Providence, to be exact, and this little joke lays the groundwork for the subsequent series of stories that will come to fill out The Divorce. Kent, it appears, has left behind fate, or at least some sense of the divine plan, and in the process becomes the purest of storytellers: present inside the narrative and nearly completely irrelevant to it. The catch is, of course, that we would hear none of the unfolding storyline without Kent, and this “tree falling in the woods” conundrum grounds us in the strangeness that follows. Aira puts us, the readers, at a table adjacent to Kent, listening in on the tales of a city coming to grips with itself in the new, new world.

The novel doesn’t really kick in until about fifteen pages or so. Kent and Leticia, a video artist with whom the former spends much of his time at El Gallego, witness a mildly comical act on the sidewalk where they’re chatting. The old Spaniard unfurls a fold of the restaurant’s patio awning, full of water from the previous night’s rain, directly onto the head of an unsuspecting passer-by—one Enrique, who is both the owner of the hostel Kent is staying in, as well as an old friend and former schoolmate of Leticia.

Enrique and Leticia, turns out, both attended the same posh boarding school in the nineties or thereabouts, run on the “pedagogical theories of a German theosophist”. One night, the school is engulfed in flames, the result of a few electrical cables broken from the transformer and gone haywire. The children, including Enrique and Leticia, try desperately to escape the conflagration, only to find themselves trapped in a kind of meta-quantum maze whose proportions and structural logic fluctuate wildly in space and time. They witness the Jesuit priests that run the school trampling through walls to escape; a beautiful façade of millions of juvenile moths surrounding the school’s frame just as it loses its structural integrity, among other hypnagogic wonders. They find a strange deliverance in the building’s basement, in the form of a roughly dollhouse-sized model of the school itself, which they are able to somehow slip into. In the chaos of the fire, “matter’s response to contiguity” bends, breaks or is refitted; this broken Escherian plane leads them down tiny halls, past wings where full-sized adolescent girls sleep in thumb-sized beds and blue flames made of shiny construction paper tongue miniature staircases. The two eventually become as fluid and light as neutrinos, slipping through atoms and matter toward their salvation, recognizing, within the chaos, that “there is no other world than this”.

Aira’s metaphysics can sometimes bewilder, but unlike Steiner’s “objective spiritualities”, they stick stubbornly to the material world. It was difficult not to think of the Ukrainians escaping from their own conflagration as I read about Enrique and Letitia’s ordeal, and any “magical” elements of the stories that follow never stray far from objective realities: poverty, alcoholism, money, loss. One can only interpret these narrative digressions, but when Aira does bring the novel back to its de facto setting, the various ethereal elements he introduces into Palermo Soho are very nearly something like that façade of moths: a beautiful but ultimately temporary veneer covering the political and economic collapse underneath (stemming, as he makes a point of emphasizing, from the country’s artificially inflated currency and resultant debt crisis of the early 2000s). Aira has commented on his use of the “continuum,” a style of writing where the narrative content—not a character, not a series of settings—is in constant movement. The Divorce is no different, although here it is accentuated. Kent is the novel’s de facto main character, but he’s more like a Holden Caulfield if the latter had spent the entirety of Catcher staring up at his dorm room’s ceiling, dreaming an escape. Kent is absent, in other words, for the sake of being present. He is a conduit, relaxing on a chair on a clear, mild day, sipping ruefully on a cappuccino or gin & tonic and, above all, listening. Through Kent (through us), the story progresses, brakes, turns around, flies away momentarily. And yet no matter how fantastic the prose gets, there is always the sense that tangible reality, whether historical or temporary, has it by the tail.

In fact, this story’s particular “continuum” doesn’t really begin with Kent at all, but Enrique, the owner of that boutique hostel in which Kent has rented a room. After the story of the boarding school fire, we are introduced to a series of unspooling digressions: Enrique’s evolutionary decorating sensibilities; a long story about Jusepe, an erstwhile member of Enrique’s boyhood “Evolution Club” and former apprentice to Mandam (“madman”, anagrammatically), a drunk sculptor who’s never created a sculpture in his life; then to Jusepe’s childhood carrying around the living Krishna god every Sunday in his working-class neighborhood on the outskirts of Buenos Aires; then to a story of Enrique’s mother, shot five times in the face and left for dead in a car trunk, but who miraculously survives; and finally, back to Enrique, whose subsequent tale of loss reiterates the book’s central thesis: that separation is, at best, a misleading concept (not for nothing, after all, does divorce originate from the Latin for divert).

It would take a much longer essay to conceptualize all of the narratives that make up The Divorce. Symbol and metaphor clash together so often that both are seemingly burned away by the raging of Aira’s imagination. What is left is around 100 pages of something like a novel dreaming itself. Not precisely meta, not exactly surreal—something that demands to be on the same footing as reality, just not on the latter’s terms.

The book ends with one final statement on this surrogate reality, and one final trick. It seems that Enrique has recently fallen in love with the woman of his dreams—intelligent, sensual, kind-hearted, beautiful. Kent dubs her “Mystery”. Unfortunately, this Mystery Enrique has fallen head over heels for turns out to be one of the minor gods, those whose jobs are to be custodians of the simpler comforts of life. Among other things, Mystery is in charge of maintaining the shape and texture of those summer ice cubes served with the fashionable drinks around Palermo Soho, ensuring they don’t melt too quickly, that they make that satisfying clink against copper tumblers and cocktail glasses that one seems to enjoy so much, but can’t explain why. This sprite of bourgeois minutia seems to be smitten with Enrique as well, as much as a non-material entity can be with a human being, and when the two finally do express their love for each other, Enrique moves to become intimate with her. For a goddess made from the stuff of ice, this can mean only one thing.

Yet Enrique, forgetting for a moment the greater, the higher theosophic sublimities in favor of the needs of the flesh, does eventually embrace his otherworldly love. I won’t spoil the ending, but suffice it to say that like those Jesuit priests who fled from the fire instead of embracing their call back to God, Enrique just can’t quite accept the reality of his relationship to the divine. Something that Aira, in the guise of his alter-ego Kent (in the guise of us), knows all too well. That is why the latter sits at El Gallego each day, thousands of miles from where he’d left his fate; waiting, we can assume, for life to ferry him off again on some new unfolding narrative.

The Divorce is published by And Other Stories / New Directions and is available from Amazon UK, Amazon US, Bookshop UK and Bookshop US.

Tim Benjamin splits his time between the States and South America. He’s won a couple of short story prizes and been nominated for a Pushcart Prize. His first novel, Cilastina Bay, is available at cilastinabay.com.