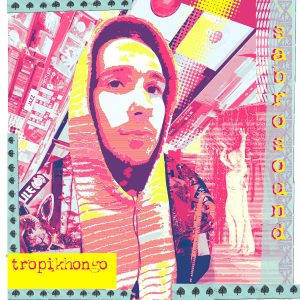 Sabro Sound is a new EP from Tropikhongo, the best-known project of Adrian Lopardo, a DJ and producer from Buenos Aires, Argentina. Since the beginning of the 2000s, Tropikhongo has been characterized by a tropical and obscure sound that emerged out of the Tropikal Night parties that he used to hold together with DJ Ghost, DJ Gato, Toty Stylee, and others.

This new EP has four songs where we can find rhythms like cumbia, dancehall, moombahton, dembow, techno and sandungueo. They are tracks that fit in with clubbing culture and contemporary EDM, but at the same time they mix ethnic sounds, with an inclusive vibe and versatility.

The opening track is “Go”, which mixes moombahton with EDM synths and effected vocal samples. It’s followed by “Fruta Dulce”, which has a digital cumbia percussion, bass and accordion melody mixed with an electronic vibe. They are tracks with a club-friendly vibe, ready to break dance floors around the world. The final two tracks continue the theme: “Piña Colada” begins with a cumbia guitar riff allied to a dembow beat and electronic synths and effects, perfect for bringing a big punch on the dance floor. Final track “Nervio” is the fastest of the lot, moving on a moombahton beat with techno bass and effects.

Aside from Tropikhongo, Lopardo has been developing a parallel project called Punto Rojo, creating an explosive mixture that contrasts roots with modern rhythms, employing Afro-Latin beats and urban sounds wrapped up in a strong groove. Under various aliases, Lopardo has worked with and made remixes for artists and groups such as La Dame Blanche, La Pegatina, DJ Karim, Alto Peru, and others. He has a project with El Hijo de la Cumbia called Zona Norte, that depicts the different rhythms that can be heard in the suburbs of Buenos Aires.

Sabro Sound is released by Wakan Tanka Records and can be listened/downloaded on Bandcamp and other platforms.