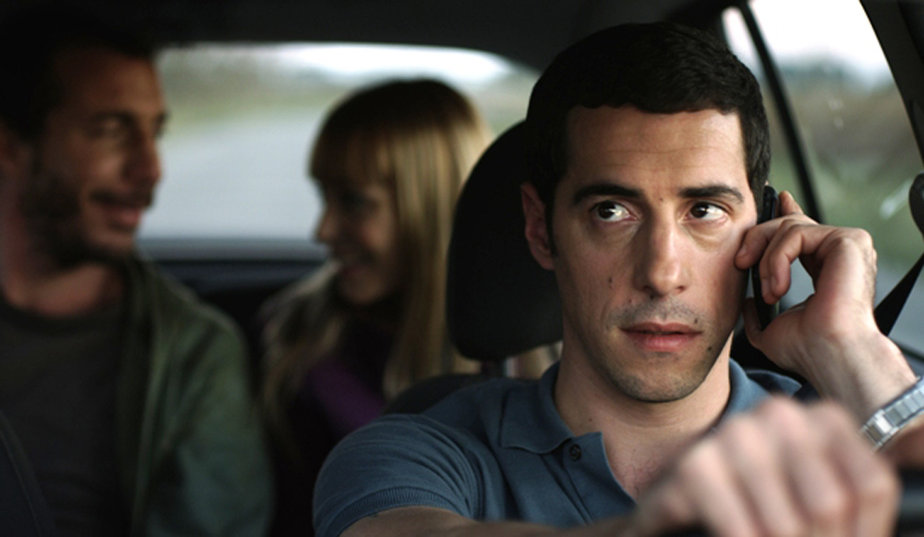 While ostensibly a road movie, Villegas actually reaches its destination quite quickly and ends up dealing with the reunion of two cousins who have been living in Buenos Aires since they left their hometown. Despite being close in their youth, the pair have drifted apart and have led very different lives in the meantime.

They are compelled back to the eponymous town, General Villegas, for the funeral of a beloved grandfather and since Esteban is already driving, he offers Pipa a lift. They haven’t seen each other for a while but clearly spent a lot of time together in the past and they use the long drive out to the country to reminisce.

The scruffy and alternative looking Pipa (Esteban Bigliardi) reminds the more straight-and-narrow Esteban (Esteban Lamothe) about a little restaurant that their grandfather used to take them to which served the odd speciality of blood sausage ravioli. Pipa does his best to convince the driver to make a small detour down memory lane and Esteban is forced to eventually give in, but not without suspecting that his passenger is trying to make the journey as long as possible.

Contrasting members of a family for dramatic effect is as old as the story of Cain and Abel, but Villegas makes the attempt to show that things are not always as clear cut as they seem to be. For instance, Esteban notices Pipa reading in the car and is shocked and incredulous to find that, along with his straggly hair, guitar and amps, Pipa has brought along a copy of the Bible which he happily flicks through. “Really?” asks Esteban, assuming that religious belief had gone out the window in adolescence as a mere fairy story. But Pipa surprises both his cousin and the viewer by simply enjoying the flow of the stories and insisting that when you actually read the Bible for yourself, “You can spin it the way you want.”

Esteban too, neatly dressed and on the phone to his fiancé every few hours, has a less respectable side to his personality which is only just lightly touched upon, much like the rest of the back story which the film is rather sparing with, preferring to hint at events rather than spell them out.

So, it is eventually made clear just how close the two were as we learn, not only that Pipa’s name is actually also Esteban, but that the two were initially in the same band together when they moved away.

The story is more about what the pair choose to do with their futures as a response to the funeral, rather than about revisiting the painful events of the past. Only occasionally does the tension bubble to the surface, ending in a spectacularly vicious yet tame scrap in a corn silo, and we have to make do with hints at the direction on life’s path which the duo will choose to take.

While there are some bits which might resonate with Argentinean country bumpkins who have similarly fled to the city:

“We castrated 38 calves earlier. The boys are over there at the BBQ if you care to join us.”

The film might lack a mass appeal since many may find it difficult to relate to either country life or such distance from an otherwise close family. But as far as slightly moody family reunion movies go, this is by no means a bad one. Gonzalo Tobal manages to show that however much you might dread a family get together and however awkward you might be when you get there, reunions are important because you need to reflect on where you have come from to know just where you are going.

Villegas is being shown at the Ritzy Brixton, London, on the 20th April at 7.00pm and at The Picture House, Hackney, on the 21st at 5pm as part of the 2nd Argentine Film Festival of London.