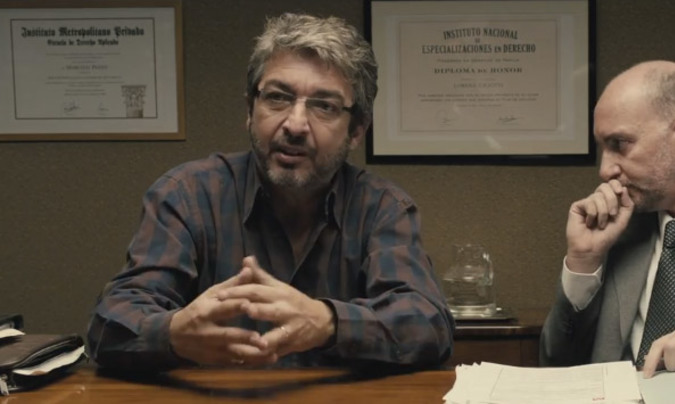 Days before the start of the 67th Cannes Film Festival, one preview of the Official Competition noted that of the impressive list of directors in this year’s competition – including Cannes veterans Jean-Luc Godard, David Cronenberg, the Dardenne brothers, Ken Loach and Mike Leigh – only one was an unknown name outside of his own country.

Wild Tales (Relatos Salvajes) from Argentina’s Damian Szifron is his first film at the French festival. Despite the backing of El Deseo (Pedro Almodovar’s production company) as well as the fact that Wild Tales forms part of an intriguing group of films from Argentina (the only Latin American country significantly represented at the festival this year) the film’s most obvious asset seemed to the presence of the ever charismatic Ricardo Darín. But whatever the critics were anticipating it most likely wasn’t death, destruction or dark, dark humour: Wild Tales is the blackest of comedies, that takes unfettered delight in letting its characters go on the rampage.

So, a group of passengers on a flight find out they are all strangely connected to the pilot minutes before the plane goes out of control, a waitress revisits the past when she recognizes an exceptionally rude customer as the man responsible for the ruin of her family, a bout of road rage escalates into outright war as two men pitch their cars, and their male pride, against one another with shocking results; one too many parking infractions pushes an engineer to take dramatic action against the city council; a tragic car accident leads a well-to-do family to put their morals into question; and a humiliated bride finds the inner strength and conviction to confront her cheating husband at their wedding.

While not linked thematically, all six stories have a common thread, the desire, be it through motives of revenge, despair, anger, frustration, fear or humiliation, to break through the veneer of convention and give in to the pleasurable impulse of letting rip. The results vary from the hilarious to the disturbing. In the film’s opening sequence the passengers on the flight realize that they are not there by accident, and that all of them (the model, the music critic, the school teacher, and the shrink) are connected to the pilot, having rejected him at one time or another… In another segment, Ricardo Darín stars as the engineer who gets his revenge on the city authorities after his car has been towed one too many times, by planting a bomb outside their offices, and is treated like a hero in prison, where he’s given the nickname Dynamite. In the film’s most unsettling story, a rich family attempt to cover up an accident in which their son inadvertently killed a pregnant young woman, by asking their long-serving gardener to assume the blame.

All of these tales fulfil the deepest revenge fantasies on a grandiose scale. What is striking, aside from the black humour, is their boldness. Whereas other film-makers (and some audiences) might balk at the sight of a man gleefully defecating on the windscreen of a brand new Audi while its pompous owner watches panic stricken from inside the car, Szifron is not afraid to push his characters as far as his imagination takes him. Wild Tales reveals a deep-rooted frustration with the world around him, which Szifron is keen to clarify is universal, and not specific to Argentina. Yet the film’s wit and originality reveal a very Argentine way of looking at society: an irreverence and ability to laugh at the constraints imposed on the individual by the modern world. If this is what life has to offer, then the least we should do is laugh at it, says Szifron. In a festival with much serious fare, this is a film that delights and surprises. Like a prankster on the red carpet, it offers an unexpected distraction.