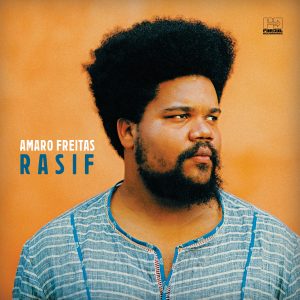 Brazilian contemporary jazz has another great representative: Amaro Freitas. From Recife, in north-eastern Brazil, the young pianist combines classic jazz with his musical roots, such as the Afro-Brazilian maracatu and the carnival sounds of frevo and baião. In the sound of Amaro it is possible to identify the rhythmic influence of masters like Sivuca, Hermeto Pascoal, Egberto Gismonti and Moacir Santos, mixed with the piano skills of Count Basie, Monk, Duke Ellington and Art Tatum. Amaro Freitas is an innovative and intimate pianist. He has agility in his hands, which he began to develop at the age of 12, when he began playing the piano in church under the instruction of his father, the leader of the church band.

His natural ability opened doors. Amaro won a place at the prestigious Conservatório Pernambucano de Música (Pernambucan Music Conservatory), but he had to give up because of financial difficulties. However, inspired by Chick Corea, he continued to study, even without having an instrument to practice on: “He [Chick Corea] completely blew my mind, I’d never seen anything like it but I knew that’s what I wanted to do with a piano”.

His persistence generated good results. Amaro made a name for himself with Sangue Negro, his debut album. That was the first step in showing the world the sonorous experiences of his land through the universal language of jazz, something which he has continued with Rasif, his second album. “I want to show the simplicity of music, to break the stigma that the piano is for a certain social class. Yes, it is a difficult instrument, which many people do not have access to, but with that you can express everything”.
​
Rasif has a swing that is only found in Brazil. Amaro’s playing captivates and shows the intimacy that he has with the piano. It does not contain itself, it turns the keyboard into percussion. It is versatile. This can be heard in “Dona Eni”, the opening track. Influenced by the baião, it is marked only by piano chords for almost two minutes. The accompaniment of percussive instruments arrive next and propel the danceable nature of the song even further. “Trupe” follows the same rhythm. In it, Amaro creates a beautiful ‘battle’ between the instruments. “Mantra” is another remarkable song. Slowly, they combine to give us an overview of Amaro’s abilities.

It’s impossible not to get carried away with the nine songs that make up Rasif, a fine album that’s worth getting lost in for a few days at least.

Rasif is released by Far Out Recordings. Amaro Freitas will be playing at Ronnie Scott’s in London on Friday 2nd and Saturday 3rd November.