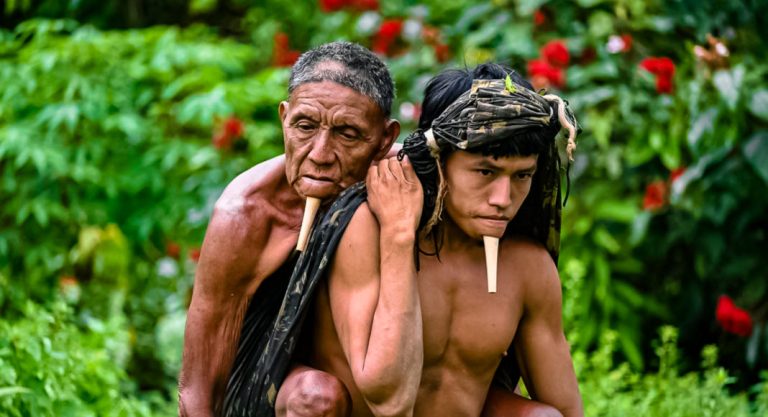 Another Brazil is Possible

‘If a picture is worth a thousand words’, said the Brazilian writer Millôr Fernandes, ‘then say it with an image’. This is what neurosurgeon Erik Jennings Simões did in January 2021 when he photographed the young indigenous Tawy Zo’é, 24, carrying his 67-year-old father, Wahu Zó’é, on his back, to be immunised against Covid-19.

Tawy comes from the Zo’é— a recently contacted group of about 300 indigenous people who live isolated in northwest Pará, near the border with Suriname, in an area extending across 668,500 hectares, according to the National Indian Foundation (Funai). Tawy walked more than six hours up and down steep slopes to get his elderly father, who has health problems, vaccinated.

The image was taken a year ago, but was only shared by Jennings in early 2022 when it went viral. As the neurosurgeon himself explained, in an interview with BBC News Brasil, his intention was ‘to send a positive message at the beginning of the year. It was also a way of trying to send a message from the Zo’é people because they always ask if white people are getting vaccinated and if Covid-19 is over’.

The multiple symbolism of the photo of the two Zó’és is all the more powerful when we take into account the lethal policy decisions of the federal government of Jair Bolsonaro (PL) for dealing with the Covid-19 pandemic. In the  moment captured by the camera, hope is mixed with indignation, perseverance with death.

The first impressions, moved by hope, were of admiration for the young man’s affection and willpower. The desire to protect his father and his people makes Tawy a symbolic counterpoint to President Jair Bolsonaro (PL), who did (and still does) everything possible to discourage vaccination of the population and public health protection measures for indigenous people.

The symbolism is even more powerful considering that the word Zo’é means ‘we’, as distinct from the kirahis, the non-indigenous, people not from here. As Tawy carries his father on his back, he carries our tiny, almost vanishing hope for a national future away from hate and bile.

Observed from an anthropological point of view, the image gives the lie to the misconception that the Tupis abandon the elderly to their fate. What we see is that the elders are carried (literally) by the younger ones. It is an image of eloquent love between father and son, of almost moving mountains to ensure the best possible chance of preventing infection with the virus. For a society which increasingly forgets the importance of elders, the photo conveys the appreciation of indigenous people for their elders. The magnanimity of the gesture is as great as the the significance of the elders.

In a still more important message, Jennings’ photo testifies to the scarcity of resources dedicated to indigenous people in Brazilian territory by the federal government. If Tawy wasn’t able to carry his father, who’s to say if or how the vaccine would reach him? Yet the Zo’é people, in a joint decision with the medical team who had been in the area for more than a decade, invented pandemic prevention strategies to take account of their culture, ways of life, and their protected territory.

It is well known that the government of Jair Bolsonaro faces accusations of genocide against native peoples. There are already at least six complaints at the Hague Court, sent by groups of lawyers, indigenous people, activists, and politicians. These are complaints about the policies put into practice by the federal government, such as denial of drinking water, turning a blind eye to the invasion of land grabbers and loggers and distribution of ineffective medicines to fight the pandemic.

The sight of  Tawy carrying his father conveys a message which is bitter-sweet. In the presence of warm affection between father and son, an inadequate State is exposed to view, one which obliges indigenous people to be advocates for themselves and their loved ones in order to enforce their rights.

Despite the State, personified in the person of President Bolsonaro, doing its best to prevent the population from getting vaccinated, Tawy and his father were vaccinated, together with 67.86 per cent of the Brazilian population.

The Zo’é survive by their resilience, despite the government. The dynamics of these people, who have faced other health crises over the years, is based on their ability to adapt. During the pandemic, it was no different. It was their own, unique strategy, not only for survival but for well-being. They could not be prevented from being happy in their territories.

Marcos Colón coordinates the Portuguese Program of the Department of Modern Languages and Linguistics at Florida State University and is the director of the documentary ‘Beyond Fordlândia’. Colón has a doctorate in cultural studies from the University of Wisconsin-Madison.