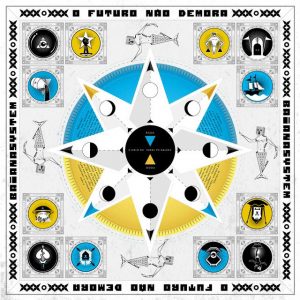 Since their acclaimed album Duas Cidades was released in 2016, BaianaSystem have often been singled out as the most relevant novelty in Brazilian music in recent years. Their cathartic shows and their use of the trio elétrico format during carnival made them one of the stand-out names in Brazilian culture in recent years. Caetano Veloso even described them as responsible for a new climax during Salvador’s carnival, with even more intensity than he had felt when he returned from exile in London in 1972.

O Futuro Não Demora, BaianaSystem’s latest release, mixes guitarra baiana, ijexá, hip-hop, dub, samba-reggae, Latin rhythms and electronic beats. The essence of the group remains, but if Duas Cidades made the urban theme central, this new album seeks a connection with ancestry and nature in order to think about the future.

Conceived on Itaparica Island, in Bahia, a place where slaves used to arrive in Brazil, O Futuro Não Demora proposes a trip from the island to the continent, or, track by track, from water to fire passing through the center of the Earth.

The first track, “Água” (Water), takes us back to the beginning of life; “Bola de Cristal”, which promises to be the biggest hit of the album, reflects about the emergence of human beings; “Salve” is about ancestry and spirituality; “Sulamericano”, with the collaboration of Manu Chao, has lyrics about territory and Latin America. “Sonar” is a rocksteady that connects us with the seabed and leads us to the center of the Earth (“Melô do Centro da Terra”).

“Navio” (Ship) mixes Brazilian samba-reggae with a dub production by the British producer Adrian Sherwood, remembering the historic connection between Brazil and Europe. The last part of the trip passes through Bahia’s backwoods, indigenous folklore and the ghettos of Salvador, experimenting with synths, hip-hop and ragga and grime vocals from BaianaSystem’s vocalist, Russo Passapusso. O Futuro Não Demora closes with “Fogo” (Fire), reflecting on the past, present and future.

An interesting track on the album is “Saci”, a song that, more than the others, seems to be made for the carnival. Saci is a Brazilian folkloric figure that first appeared in the culture of indigenous tribes but, with the influence of African culture, became famous as a mischievous black guy who lost a leg while playing capoeira. If BaianaSystem’s shows and trio elétrico are impressive for the way people dance merging mosh pits with Brazilian cirandas, you can imagine what happens when thousands of people do this hopping on one foot, as a Saci would do.

The relationship of the group with political issues also need to be pointed out. This is something which has always been transparent but has become even more present in recent politically-turbulent years in Brazil. It is reflected in the lyrics and in the conception of the album. O Futuro Não Demora remembers Nelson Mandela, Martin Luther King, Zulu Nation, Ilê Aiyê and Mestre Moa, a musician killed last year, after a political discussion during the Brazilian elections.

By rescuing Brazilian ancestry, whether in rhythms or in lyrics, in an innovative and contemporary way, BaianaSystem once again show their relevance to Brazilian music, with a powerful album that deserves attention.