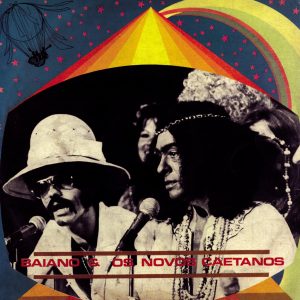 The market for Brazilian music on vinyl is constantly growing, with new prints of classics like João Gilberto’s Chega de Saudade or Gal Costa’s fabulous self-titled record from 1969. It’s so easy find records which were out of reach just a few years ago with the click of the mouse and have them delivered to your door. But I didn’t find this particular record online, I stumbled on it at Piccadilly Records, while trying to get a sense of what I could find in terms of Brazilian vinyl while in Manchester. Baiano e os Novos Caetanos was a huge surprise since I didn’t know this record ever existed. On the cover, there is Chico Anysio, one of Brazil’s finest ever comedians. I became intrigued, decided to listen, and found a brilliant record, with amazing musicians, which is at the same very funny (if you can understand Portuguese) and incredible musically.

The album was created following the success of Chico Anysio and Arnaud Rodrigues’s characters Baiano and Paulinho Boca de Profeta, created for a TV program called Chico City. The act was inspired by the return of Caetano Veloso and Gilberto Gil from their exile in London, at the beginning of 1973.

The album, described as ‘peculiar’ by many international music critics, is a satire of Novos Baianos and Caetano Veloso, with the duo’s characters based on Caetano and Novos Baianos’ Paulinho Boca de Cantor. The record features brilliant musicians including members of Azymuth, as well as Orlandivo and Durval Ferreira. The record is a luxury dialogue of genres such as rock, samba, baião, xaxado, maracatu, bossa, choro, ciranda and soul.

Despite the apparent tone of mockery with some of the greatest icons of MPB, it only takes one time listening to the album to understand that their message was much more than a simple joke. The record denounces the dictatorship in Brazil using humour and poetry as a disguise to the lyric’s true meanings.

One of the main hits of the duo, “Vô Bate Pa Tu”, composed by Arnaud and Orlandivo, deals with one of the heaviest subjects of the dictatorship, torture and the silence imposed by the censorship:

The partnership between Chico and Arnaud lasted four albums, this one followed by Baiano e Os Novos Caetanos Volume 2 in 1975, A Volta in 1982, and Sudamérica in 1985. The duo also produced the album Azambuja & Cia, along with Azymuth. Between the years of 1975 and 1982, Chico also released Baiano e Amaralina, a tribute to Elba Ramalho.