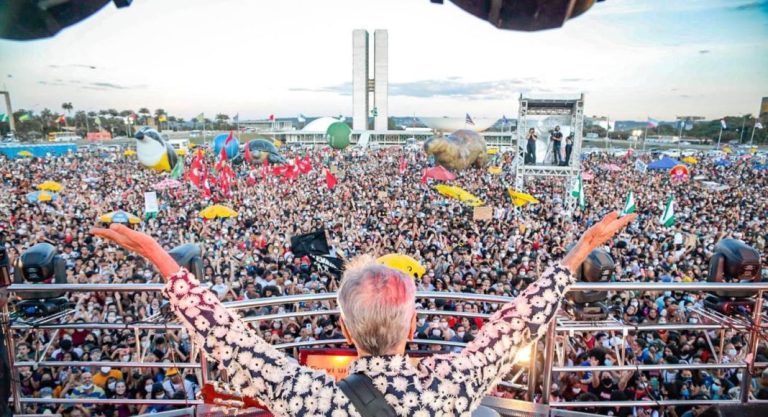 Brazilians vs Bolsonaro’s ‘Package of Destruction’

New laws will give green light to mining and invasion of indigenous lands.

Thousands of people gathered in front of the national congress in Brasilia on 9 March to protest at a proposed bill to open up indigenous lands to mining, oil exploration and hydroelectric dams. The protest was organized by over 200 NGOs, indigenous groups and artists, led by one of Brazil`s most famous singers and songwriters, Caetano Veloso.

They called on their representatives to reject not only the mining bill, PL 191/2020, but other proposed bills which would end environmental licensing, reward landgrabbers, and remove controls from pesticides.  Not for nothing is it being called the ‘Package of Destruction’. And not for nothing do these bills have the enthusiastic support of  President Jair Bolsonaro – himself the biggest single threat to the Amazon rainforest and its traditional inhabitants.

Ignoring the protest, a majority in congress decided to go ahead and fast track the vote without submitting it to the normal committee process. But in acknowledgement of the criticisms, it was also decided to set up a working group to examine the bill, reporting in a month`s time.

Bolsonaro’s pretext for urgency is the need to substitute  imports of fertilizers from Russia, blocked by the war in Ukraine. He claimed that deposits of one of the essential ingredients, potassium, were located in indigenous territories, deliberately ignoring the fact that over 90 per cent of known deposits are to be found elsewhere, mostly in the state of Minas Gerais.

Bolsonaro’s desire to open up the Amazon and especially indigenous lands to mining is well known. A few days ago he issued a decree to encourage what was euphemistically termed ‘mineração artesenal’ – in reality  large scale goldmining – in the Amazon region.

‘Mining is not a cheap and rudimentary activity. Mine owners need enough capital ‘

Marcio Santilli, founder of the Socioenvironmental Institute, ISA, points out that ‘mining is not a cheap and rudimentary activity. Mine owners need enough capital to buy costly machinery – dredges, excavators, bulldozers – and to provide a regular supply of fuel, mercury and other ingredients. They also need to hire pilots to fly men and supplies into the middle of the forest.’

And to understand the real effect of mining on indigenous communities, Carlo Zaquini, who has been a missionary among the Yanomami forever 40 years, told me, with tears in his eyes, what he has seen in the last few months.

‘The miners bring teargas bombs, machine guns. They enlist young men, give them guns. Malaria among the Yanomami is worse than it has ever been, Sesai (the government’s indigenous health programme) is useless, because it is run by political appointees, not health professionals.  Recently a plane ran over and killed a young Yanomami as it took off from the runway near his village. The plane just flew off, nobody knows who the pilot was. Most children being born now in communities near mining areas are fathered by garimpeiros [miners].’

A study published this week by Nature Climate Change suggests that the Amazon rainforest is reaching a tipping point, beyond which it will no longer be possible to save it from becoming a savannah. Only a complete halt to deforestation will prevent this happening.

In Ukraine, it is the bombs, shells and mortars that are destroying the habitat, creating a wasteland and killing people. In Brazil, incredibly, it is the President and Congress who are hellbent on approving laws that will destroy Brazil’s greatest resource and create a degraded wilderness.