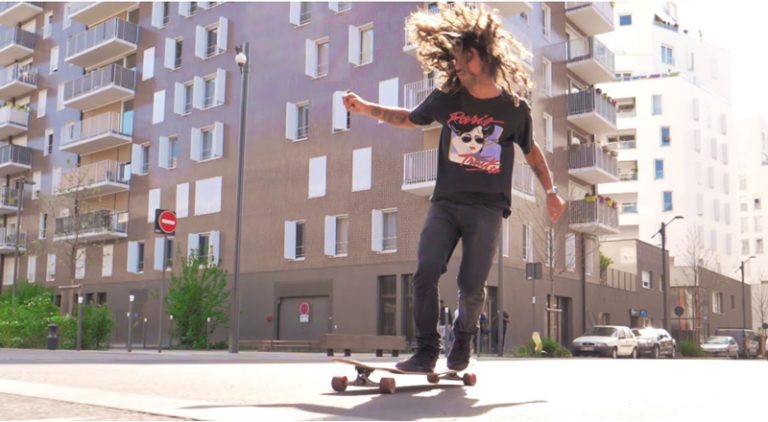 Brenno Brélvis won the 2016 So You Can Longboard Dance? competition with a move he calls the Spin Brélvis. He spins 360º on his left foot, while tucking his right foot behind his left knee [see video below]. As he completes the spin, he sinks to his left knee, with the right foot still tucked in the crook, right knee jutting to the side. And then he springs back up, without losing a beat. It is a move that would challenge most dancers on a hardwood floor. Brélvis does it on a long skateboard, approximately 8.5” by 47” (125 cm), rolling forward at about ten miles an hour. You can see why the judges were impressed.

Brélvis is Brazilian, and the move would look familiar to aficionados of frevo, the carnival dance of the city of Recife, in Northeastern Brazil. (Brélvis, as you may have guessed, is a nickname—the longboarder’s given name is Brenno Gomes Becker.) As Brélvis openly acknowledges, he moved a frevo step to longboard, made it his trademark and rode it to fame and fortune—by the standards of longboard dance, at least, which admittedly remains a niche sport.

The annual So You Can Longboard Dance? competition in Eindhoven, the Netherlands, is the World Cup of the discipline, and Brélvis’s 2016 triumph was a revelation. He was an unheralded upstart from the Brazilian interior, who had sold his mother’s refrigerator to scrape up funds for the ticket to Europe. He spoke nothing but Portuguese and had never traveled beyond Brazil. But the judges quickly recognized that Brélvis brought not only dazzling technical skill to the competition but something rarer, his own style. In a sport where the top boarders post clips on Instagram and inspire copycat performances from ardent admirers within a week, Brélvis’s peripheral origins worked in his favor. Few had seen his clips before the competition and his startling innovation retained its power to amaze.

That his style hinged on combining the regional tradition of frevo with the global novelty of longboard dance by no means lessened the power of that innovation. This is what great dancers do—and what great artists do, more generally. They combine previously existing elements in unexpected ways and create something new. And longboard dancing exists in that overlapping territory of sport and art, akin to ice dancing or rhythmic gymnastics. Brélvis has continued this exploration of Brazilian hybrids, incorporating moves from capoeira into his subsequent performances. At the same time, he is just as likely to moonwalk on the board [see video below]. This tropicalist universalist approach has kept him at the forefront of trends in longboard dancing, and has expanded the possibilities of the discipline.

Both frevo and capoeira are Afro-Brazilian cultural forms, and in transposing their physical vocabulary to longboard, Brélvis brings the syncopation, improvisation and playfulness that mark those traditions to a new medium. Previous longboard dancers emphasized grace or virtuosity. Brélvis emphasizes the quality that practitioners of capoeira describe as malícia. This is often translated as treachery, but trickiness might be more fitting. As with a capoeirista or a frevo dancer, Brélvis’s moves surprise and disarm. He is a longboard trickster, not in the sense that he is performing tricks on the board—although he is certainly doing that—but in the sense that his style is informed by the deep Afro-Atlantic trickster tradition. It is a tradition that that shows up in manifestations from Anansi the Spider to Br’er Rabbit, from the Zé Pelintra figure of the Afro-syncretic religion of umbanda to Ti Jean, the wily youth of Afro-Caribbean folktales.

It is a tradition that seemed to shape the career of the legendary footballer Manuel Francisco dos Santos, better known as Garrincha, for example. Garrincha emerged from a small town in the state of Rio de Janeiro to carry Brazil to two World Cup victories and change the way soccer was played in the 1950s and ’60s, wrong-footing defenders with his misdirection. Garrincha was famed for using Brazilian jeitinho, or little way, the improvised solution, to dazzle stolid European defenders. Like Garrincha, Brélvis hails from a small town in Rio de Janeiro state, in this case from São Pedro da Aldéia, across the lagoon from the beach town of Cabo Frio, about two hours up the coast from the city of Rio de Janeiro. It was in São Pedro da Aldéia that Brélvis fell in love with skateboarding. And while most of his peers—a local crew that styled themselves Los Brélvis—honed their tricks on the more common short skateboard, Brélvis not only took to longboarding, but to the comparatively rare pursuit of longboard dancing. Like Garrincha, he has brought malícia and the trickster’s delight to his sport, transforming it in the process.

To be fair, the annual So You Can Longboard Dance? event in Eindhoven is more festival than competition. The top boarders are all sponsored by the leading manufacturers of boards, trucks, wheels and skateboard clothing. Beyond enjoying the scene and learning new moves, their priority is cutting clips that will attract extensive views on Instagram and other social media. In contrast to shortboard skateboarding, longboard dancing is a sport that has progressed directly from amateur origins to social media monetization without going through an intermediary stage of televised X-Game competition. This has kept the emphasis on collaboration and exchange.

Nor is Brélvis the only star. Last year’s winner, Aboubakry Sekh, is a Parisian of Senegalese background who goes by the moniker Longboard Smooth Operator. Abou Sekh’s style is like liquid mercury in comparison to Brélvis’s bubbling gumbo [see video above]. The serene Giulia Alfeo, meanwhile, shows that grace and rhythm are as important as technical virtuosity in creating a memorable performance [see video below]. (Not for nothing, So You Can Longboard Dance? used a clip of Alfeo to promote the 2018 event.)

The sport also remains distinctly low-budget. Most boarders have day jobs. Sekh is a geotechnical engineer. Alfeo is a university student. Brélvis appears relatively unusual in choosing longboard dancing as a profession as well as a passion, long before payoff was guaranteed. The stakes may be changing: Sekh’s recent commercial for Nissan is one indication that longboard dancing may be about to have its mainstream cultural moment, in the way that parkour did a few years ago.

When the top boarders converge on Eindhoven in April for the 2019 So You Can Longboard Dance? they will do so with heightened expectations for exposure and recognition, if not necessarily heightened competitive intensity. Brélvis will presumably be among them. Like Garrincha before him, he appears to be as focused on having a good time as on reclaiming his title. But there is little doubt that he will unveil another dazzling combination of Brazilian dance and longboarding, and that he will do it with malícia and jeitinho.