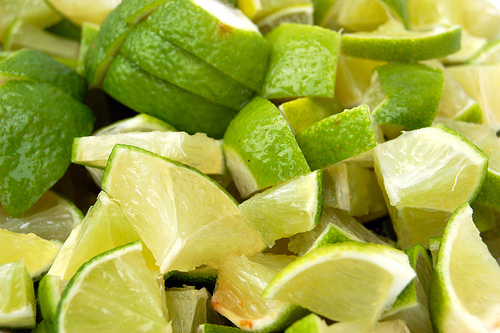 Last month we took a look at cachaça, the spirit of choice for Brazilians, and people visiting Brazil. Now, we’re going to look at some of the cachaças on the market, and find out which make for the best caipirinhas.

Four cachaças were chosen for this challenge; Sagatiba, Leblon, Salto and Maré Cheia. The first three are readily available in the UK, the last is the dangerous stuff, straight from Paraty in Brazil.

So they are the contenders. Now, we need to set the parameters of the test using a classic caipirinha recipe. We included a very basic capirinha recipe in our previous cachaça article but now we’re gonna hit you with the road-tested method to great caipirinhas time after time.

This is what your limes should look like after they’ve been cut:

To prepare, put the lime and sugar in a jug and muddle (which is similar to crushing but not as tough. If you crush the limes the skin will break, making the drink bitter, so just apply pressure, get some of the juice out, but don’t kill them!)

Next add the ice and cachaça and shake. If you don’t have a jug then make in a glass that is shakeable or in two seperate glasses, mixing the sugar, lime and cachaça in one and then pouring over the ice in a second glass.

If that’s not a perfect caipirinha, you’ve done something wrong!

Enough messing around, now it’s time for the main event. First up…

This is the most common cachaça in the UK. In many off licenses and bars this is in fact the only cachaça they stock. As a result, I’ve drunk this spirit hundreds of times.

It smells smoky, and this is true of it’s flavour also. Strangely, it tastes as if it’s been in an oak barrel for far too long, with a strong smoked wood aroma and after-taste. I have drunk this many times before and it’s never been this pronounced, so I’m assuming this could be a bad batch. However, this is a test, and this will definitely count against it!

Leblon is a relatively new brand to the scene, started by US entrepeneur Steve Luttman. It calls itself the “champagne of cane” as they use similar techniques to those used in producing XO Cognac in France.

With this cachaça, the hype is true, this is so smooth it feels like honey. It has the cachaça kick (it is 40% abv after all) but with a rounded flavour that only brings good sensations to the palette.

This cachaça was launched only one year ago and is really aimed at a different market as the rest of the drinks/spirits. It’s only mid-proof strength (24% abv) and has a strong lemon kick, resulting in the sweetest sip of the lot.

When put alongside the other drinks it seems far too saccharine, lacking the bite of the others and with the artificial citrus taste overpowering the taste of the limes and the cachaça. It’s clear that this is cachaça that wants to be known as not tasting of cachaça, aiming instead to be Brazil in a bottle. Considering I have met many people who have complained of their capirinhas being too strong, this one could catch on, but for me, caipirinhas HAVE to be strong with a distinctive flavour, and this is where Salto fails.

Paraty is a beach town on the green coast of Brazil between Rio de Janeiro and Sao Paulo. Every year they hold the Pinga Festival, a huge festival for cachaça (or pinga as it is known in that area). It’s an area intrinsic with the drink and therefore home to many brands of the spirit.

One of these brands is Maré Cheia, who produce a white cachaça perfect for caipirinhas. The only thing is, since leaving Brazil I have become slightly less immune to the stuff, and this is really potent. You can understand how cachaça could be called Brazilian moonshine after a taste of this. The over-riding flavour is from the alcohol with a touch of sweetness. In the slightly mundane surroundings of British life it seems slightly less luxurious, but is still hard to say “no” to. If you enjoyed making your caipirinha consider online bartending school to learn how to create some other great drinks.

Leblon – it could only really be this one. Smooth, sweet and strong with no bad after-taste and a full palette.

If you wanted to repeat this experiment go straight for the Leblon, and maybe get something like this together…