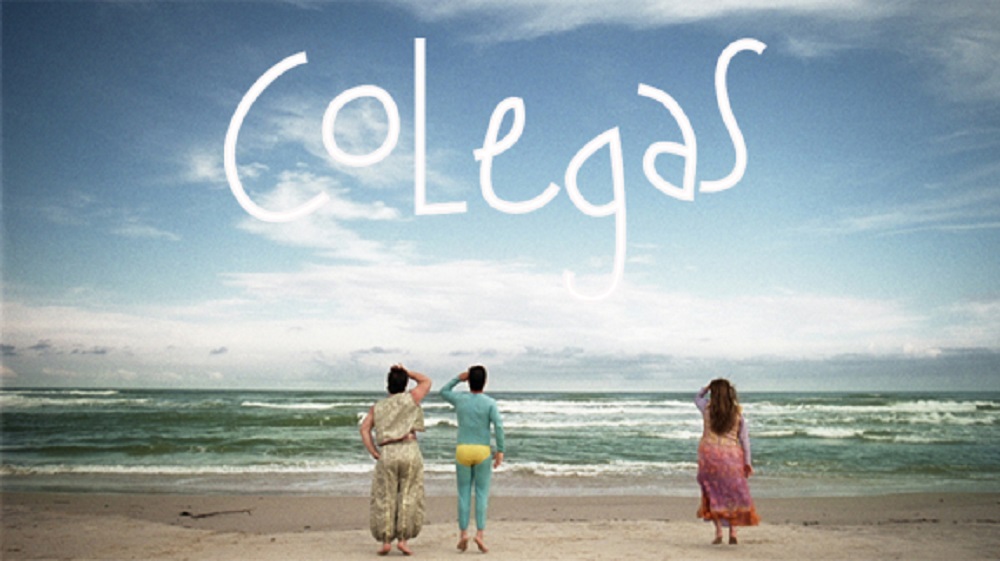 Cinema is, for many, a world full of dreams. A space where, over one or two precious hours, our innermost hopes, ambitions and desires can come true – where the impossible can briefly, yet brilliantly, become a reality.

However, what would happen if we were to seize the opportunity to enact the magic we view on screen? What if we were to leave everything we know behind and thrust ourselves into the unknown in search of something more?

In Brazilian director Marcelo Galvão’s heartwarming feature Colegas, this is exactly what three friends with Down’s Syndrome do when they flee their mundane lives in an institute and embark on an unplanned road trip full of comical hijinks.

Abandoned and forgotten by the relatives who once used to visit them, Stalone (Ariel Goldenberg), Aninha (Rita Pokk) and Marcío (Breno Viola) pass their time in their school’s video library, bonded by the movies they watch together and the famous one-liners and quotes through which they communicate.

With all that they know about the outside world mediated through film, one fateful viewing of Thelma and Louise will inspire the gang to embark on a cross-country adventure into unfamiliar territory. With a stolen Volkswagen Karmann-Ghia, they will travel to unknown places and come across dangerous situations in pursuit of three simple wishes.

Stalone (whose name came from his father’s fascination for Rambo) wants to visit the sea, a concept which remains abstract to him after having spent his entire life enclosed within the grounds of the institute.

Meanwhile, his friend Marcío wants nothing more than to fly, an exploit which he has frequently attempted but which is shown to have fallen hilariously flat on all occasions.

Aninha, on the other hand, is on a search for love, with her desire to flee driven by her yearning to meet and marry the man of her dreams.

Fittingly for a movie whose plot relates so heavily to the realm of film, Colegas is a treasure trove of filmic references and quotes; after all, the trio’s relation to the outside world is mediated through the on-screen experiences that they have shared together and as such, they are guided solely by the films that they have seen.

From the very start of their journey, this fact will inadvertently get the gang into hot water. Indeed, when the gang realise they have no funds to survive on at the feature’s start, they decide to replicate the robberies they’ve seen on screen, using a toy gun and crude masks to hold up a convenience store while quoting Pacino’s Scarface.

Likewise, when Marcío makes small talk at a roadside diner by re-enacting a famous Hannibal Lector scene plucked from Silence of the Lambs, he inadvertently persuades the elderly man he is speaking to that he has a penchant for cannibalism. Dumbstruck, the poor fellow tells the local news services that the gang has already killed a man and eaten his liver, turning the trio from petty miscreants to Brazil’s most wanted overnight.

The cat and mouse chase that follows offers both a satire of Hollywood stereotypes and a damning critique of social prejudice.  The biggest satire of all comes in the form of the crime-fighting duo of Agents Souza and Fonseca, two men who act as if they are in a Lethal Weapon film but who are utterly incapable of carrying out the very simplest of tasks while aiming to bring the buddies to justice.

Meanwhile, other scenes will subtly allude to the ridiculousness of social prejudice and, simultaneously, invite us to reflect on how we treat those who are different to us. In one notable scene near the feature’s end, Stalone asks a larger lady if she would like to dance at a black tie party and, upon seeing he has Down’s Syndrome, she shoots him down by remarking: “Don’t you realise that we’re different?” Unfazed, Stalone replies “don’t worry, I like fat girls”, playfully reflecting the underlying prejudices of the on-screen character back onto the portly female.

Such quips aside, narrative development largely focuses on the humorous juxtaposition of the trio’s innocent exploits with the heavy-handed police investigation which aims to track them down. Indeed, while the viewer sees the buddies fulfilling simple desires like visiting a sunflower field, spending a day on the beach and going fishing, the police forces stretch across the entire country to track the ‘dangerous’ group down before they wreak any more ‘havoc’.

Accordingly, the film possesses a quite brilliant dual quality: on the one hand, the viewer is offered the true, simple course of events seen through the eyes of the three friends; sheltered from the ways of the world after spending their lives holed up in their school, they approach their adventure in the extraordinary manner of the tales they’ve seen on-screen.

In this vein, whether we see Stallone in complete awe as he observes the ocean for the very first time, Marcío finally achieving his dream of flight upon hijacking a hot air balloon anchored to a sandy beach or the trio replicating that famous “I’m the king of the world” moment from Titanic as they stand on the prow of a fishing boat, we are invited to reflect on the simple pleasures of life and view the world from a different perspective.

On the other hand, the buddies’ desire for the extraordinary is also shared by the film’s peripheral characters: after all, we’ve already seen the cowardly witnesses crumble under pressure by the time we see them adopting macho personas for the TV cameras, and we therefore watch as their secret desires for the extraordinary are unveiled in far-fetched stories of bravery, courage and mental strength worthy of the heroes in Hollywood flicks.

In this way, director Galvão is able to mischievously toy with the idea that, regardless of who we are and where we come from, we all revel in those extraordinary experiences which are sorely lacking from everyday life but which are all too present in the glitz and glamour of the movies.

Accordingly, as the feature draws to a close, we are invited to reflect on a quote we were shown at the very start of the film, plucked from the The Dead Poets’ Society and seemingly directed at the film’s protagonists:  “Aproveitem o dia, rapazes. Façam de suas vidas algo extraordinário” (Seize the day kids, make your lives extraordinary).

Taken as a whole, Colegas stays true to this mantra by offering the viewer an insight into the lives of three buddies who make their mundane lives extraordinary by realising the simplest of wishes and projecting the experiences they have seen on-screen into the real world.

Part road-movie and part love-letter to the world of film, Marcelo Galvão’s striking feature offers a touching and often hilarious tale which focuses on the simple pleasures of life and which plays with the idea that films, if only for a fleeting moment, possess that unique ability to make our innermost dreams a reality.