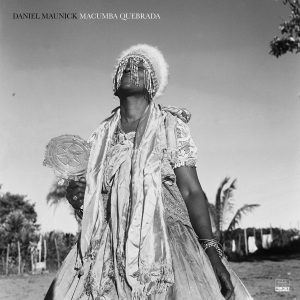 Brazilian rhythms meet London’s gritty sonic aesthetics in Far Out Recordings’ latest release. Macumba Quebrada is the first full-length LP from Daniel Maunick, the label’s in-house producer who has worked with the likes of Azymuth, Marcos Valle, Terry Callier, Incognito, Ivan ‘Mamao’ Conti and Sabrina Malheiros. Maunick’s dual residence between Rio de Janeiro and East London has been the focal inspiration of the album, combining broken beats, deep house, Latin percussion and jazzy chords to create a mix of weird and wonky grooves. It bounces, but it’s definitely got some bite to it.

The album swings between dance-floor bangers and more experimental dance music, with “One Nite Stand” being the obvious crowd pleaser. The squelching bass, chugging synths and pounding four-to-the-floor groove make this a sure hit, and the slap-bass samples that punctuate it echo back to the classic Brazilian disco of decades past. “Dirty Trix” is a similarly club-friendly track that mixes acoustic percussion with dark synth sounds, positioning it somewhere in between the organic realm of disco and the electronic one of deep house.

The taste of London’s contemporary music scene is present throughout Macumbra Quebrada. On “Red Doves” and “A Vicious Circle” we can hear the resurgence of broken beat in the UK, for example. The use of melismatic, punchy female vocal samples is reminiscent of the UK garage sound too, and in the case of “Orbitus More” it is drawn out to create an almost eerie effect.

The influence of jazz is an obvious feature that unites the music scenes in Rio and London, and as such this album is tied together by its use of extended harmony and unusual progressions throughout. The track “Biology” even smacks of the acid-jazz scene that Maunick’s father’s band, Incognito, came up within. The sampled strings and drum machines are quite a throwback, but the sharp production style gives it a modern feel which stops it from feeling dated. The saturated production quality on Macumba Quebrada is an interesting touch too, bringing a real rawness to the album. Sometimes it adds to the subtle ‘dusty percussion’ effect, such as on the eponymous “Macumba Quebrada”, whilst on “Amnesia Haze” it is liberally applied for a crunchy lo-fi sound, giving it a grating quality whilst maintaining its mellow warmth.

The album’s mix of Afro-Brazilian percussion samples and contemporary London dance music is quirky, but should not be too much of a challenge for anyone already into the city’s experimental electronic music. It will be exciting to hear these tracks played out in clubs, because to fully appreciate Macumba Quebrada’s masterful production it begs being listened to on a good-sized sound system, whether that be in Rio or London.