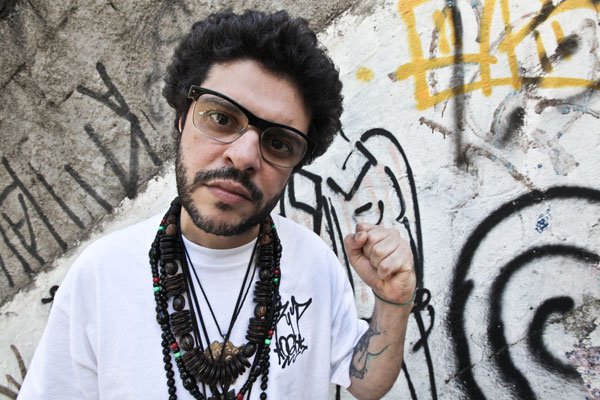 Daora! An Interview with Rodrigo Brandão

Brandão is an interesting character; he’s been around the hip-hop scene in São Paulo since the early days when those interested in breakdance and the hip-hop beats they were hearing from the US started conglomerating around the legendary São Bento subway station, the scene that would birth such diverse talents as the renowned street artists OsGemeos and breakthrough rapper Mano Brown. In the 90s he presented Yo! MTV Raps bringing this whole scene to a bigger audience. These days he works as a promoter and curator, bringing artists like Mulatu Astatke and Pharoah Sanders to São Paulo. And, of course, he’s no stranger to the mic himself, performing with his group Mamelo Sound System as well as collaborating with the likes of Ekundayo and M. Takara in recent years. All in all, Brandão is the perfect candidate to compile a record or urban Brazilian music. We had the chance to ask him a few questions, and here’s what he said.

So, first of all, why did you decide to call the compilation ‘Daora‘? Can you give us an example of when you would say this on a day-to-day basis?

“- Did you see the new graffiti OsGemeos just did on Avenida 23 de Maio?
-Yeah, daora!”

How did you choose the tracks on Daora? What do you consider ‘urban’ music?

There were some cuts that Lewis wanted to include, which is part of a collaboration, but most of it was music that excited me, from people that’s doing real stuff. In my mind, ‘urban music’ means sounds that come from the big city atmosphere, made from heads that are actually in the street, going to spots, walking, partying, protesting, checkin’ the pixos [the grafitti tags], catching the subway, interacting directly with it, taking part in the spirit of the place.

Did you have to do much research or is this music something that you’re always listening to?

No research was necessary, I live and breath it, y’know?

Tell us a little bit about the Brazilian rap scene at the moment. How is it changing? Is there now good Brazilian rap coming from lots of different cities in Brazil?

During the last few times I’ve been abroad, people have told me how Brazil is making it big these days, but it’s not really like this. Otherwise, we wouldn’t have children beggin’ for pennies in the streets any more. Poverty is still a major problem over here.

So, I see a parallel with the rap scene: there’s way more talk than real results. There’s some new cats making money, but almost only the ones who take a pop-oriented approach to it. Deep rap music is still hard to swallow. Most of the talented, creative, cutting-edge artists keep working on an underground level.

And even though there’s local scenes growin’ beautifully around the country, especially in Belo Horizonte and Curitiba, nothing can beat São Paulo. It’s still the national hip-hop capital of the country. Actually, not only rap-wise, right now I can tell you it’s also the place to be when you talk about musical quality and innovation in general.

Do you feel like Brazilian rap has broken down some barriers to the mainstream, especially after the success of Criolo?

Not really, only a couple rappers get media coverage, it didn’t changed for the better of the scene, if you check the big picture. Specially when you see that Criolo is not actually a rapper anymore, as he was during his Criolo Doido period. He is now a singer that has a real good voice and is connected with the MPB tradition, way more than rap in itself, which was a perfect move for him, in my opinion. There’s really so much still to achieve, for hip hop especially but for all kinds of creative music.

I know that you believe in candomblé. Why do you think musicians are so interested in exploring afro-Brazilian traditions at the moment?

Everything works in cycles, so once there was a very fruitful era for music related to the orishas in the sixties and seventies (Jorge Ben’s África Brasil, Os Afro-Sambas de Baden Powell & Vinícius de Morais, Abigail Moura’s , Clara Nunes, etc.), and it’s a natural thing for that to come back at some point. During the eighties and nineties it was deeply underrated. Now there’s a whole generation that have realized how beautiful and powerful the candomblé chants and beats are, and once you know them, you can’t deny it!

The fact that there’s so many non-black Brazilian musicians into [candomblé] reflects what’s happening in our society: nowadays, it’s easier to see a black man in a Christian or Protestant church than in a candomblé ceremony, and vice-versa. For me, it’s a personal process that has been going on for more than a decade.

There’s a lot of tracks on the album that have a strong afrobeat quality. Why do you think Brazil is so in love with this style right now?

It’s part of the zeitgeist, and even though there’s a Back To The Roots feeling in the air, candomblé in itself is still frightening to some people. When you you do something that relates directly to it, you’re making a statement, taking a position. So afrobeat is the perfect outfit: it’s African but related to 70s Funk, and it ain’t – in those same peoples’ point of view – as radical as candomblé. You can get out with being cool and not be associated with macumba [an African word that has connotations of witchcraft in Brazil]. Besides, of course the undeniable fact that afrobeat sounds really good!

A lot of the songs on the compilation come from São Paulo. What is your impression of the alternative music scene there?

The city lives one of its creative peaks when it comes to culture. For years, São Paulo was only a good place for outside musicians to make a living, and the local scene was neglected to the bone. It made us sharpen our skills, made us struggle to be better and push the envelope. It took some time, but now it’s obvious that the city has become a mecca for creativity fed by chaos. I’m a living example of it: in the last 5 years, I recorded and performed with many artists, from Pharaoh Sanders to Prince Paul, [artists] that me and my peers could never guess we’d see here 10 years ago, let alone interact with, feel their interest in what we be doing and look out for partnerships. And I’m not the only one, same thing has been happening with the Hurtmold and Metá Metá cats, to name a few.

What do you think the future will hold for artists like those on the compilation? What are the trends in venues/media/popularity in regards to underground/alternative artists in Brazil?

I hope the future holds longevity, ’cause these are some artists who’ve been putting energy into making music that expresses their souls instead of following the trends, those who don’t believe the hype!

Right now, we’re living an era that it’s all about the numbers, so there are lots of people claiming they gotta get money to justify making shitty ass music. I’m not down with that and I’m gonna keep my musical path regardless of the ups and downs of it, and I’m pretty sure that it’s like that for most fellas in the comp.

Lastly, can you pick a song or a couple of songs from the compilation that you think show a new direction in which Brazilian music will grow?

Read our review of Daora here, as well as our review of the US/Brazilian collective Ekundayo’s debut album, which features Brandão prominently. Furthermore, our Sounds and Colours Brazil book (due late Sept/early Oct) will feature an article by Brandão, looking at the early days of hip-hop in São Paulo.