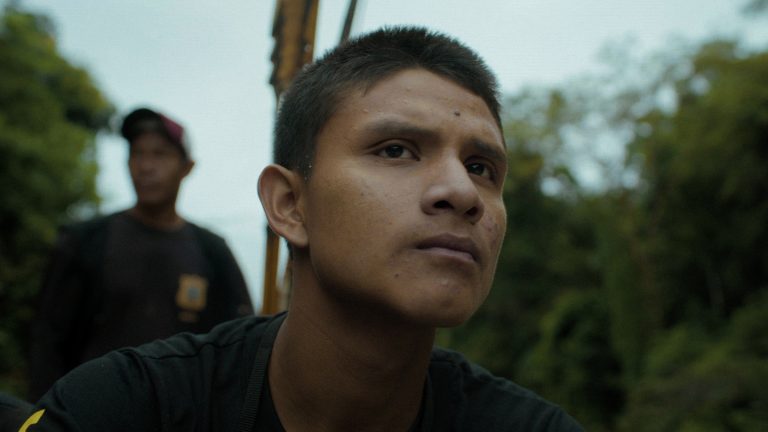 Doc Thriller ‘The Territory’ Is A Dire Warning To Humanity

Alex Pritz’s feature debut documentary The Territory (Brazil/Denmark/USA, 2022) depicts the Indigenous resistance to land invasion in the Brazilian Amazon. This subject matter is widely known. It has been extensively voiced by a countless activists, scientists, religious leaders, artists and professionals from around the Globe for many years. What stands out in Pritz’s cleverly crafted film is the fashion its urgent message is conveyed. Focused on the struggles of the remaining Uru-Eu-Wau-Wau people – a surviving Indigenous community in the Pacaás Novos National Park in the estate of Rondônia – this doc thriller is yet another dire warning to humanity. It was not until 1981 that the Uru-Eu-Wau-Wau had their first exposure to the outside world, when contacted by FUNAI, the Brazilian Indigenous affairs agency. The operation was the pinnacle of an extended pacification campaign supported by the Dictatorship era World Bank-funded Polonoroeste project. The venture aimed to open the area for roadbuilding and colonisation to promote the country’s progress. Rare archive footage of Indigenous being lured from their secluded forest with gifts such as pans, and other utensils can be seen in the film. This catastrophic encounter brought the number of Uru-Eu-Wau-Wau people to a scant 200 down from thousands.

In 2018, the year of the presidential election in Brazil, Pritz came across the lifelong work of local environmental activist Neidinha. The filmmaker was moved by the 63-year-old’s dedication and commitment to protect the Indigenous communities. Daughter of a rubber tapper among the Uru-Eu-Wau-Wau, the activist embraced the project as soon as the filmmaker reached out. The prospect of the right-wing Jair Bolsonaro as the new country’s leader would mean a disastrous outcome for the Indigenous people and the environment. Txai Suruí, Neidinha’s Indigenous daughter, also plays a role and is one of the film’s executive producers.

With a dynamic pace and sustained tension, the film benefits from a harsh sound design, which take the audience to an electrifying journey of emotions across this land battle. The 7,000 square kilometres protected patch has turned into a rainforest island surrounded by devastated dried up plots and burned-out settler sections that have been cleared for farming and future housing for landless labourers. Uru-eu-wau-wau’s new young leader Bitaté is deeply worried about their future if Bolsonaro wins the election. The Indigenous reflect on what may lie ahead and plan their actions to prevent illegal settlers from invading their protected land. With the help of Neidinha and drone technology, members of the community keep constant surveillance of their surroundings and widespread devastation from this turf war.

Pritz presents different points of view over a three-year period, capturing verité footage of controversial statements from outsiders. Sérgio is a 49-year-old farmer who dreams of owning his own farm one day. He claims his ownership rights in favour of the country’s progress after having always worked for other people. Settler Martins hankers after a regulated association to demarcate his own piece of land, as he keeps chopping down trees with his chainsaw and setting fires to clear lands. When Covid hits and the filming comes to a halt, Pritz relies on the help of local cameraman Tangae who does not disappoint. Under Bolsonaro’s leadership, the country’s Indigenous affairs department recognises they are unable to stop further invasions. The Uru-eu-wau-wau create their own enforcement group to stop future land-grabbers at arrowpoint and turn them over to the authorities. The fast-paced film reaches a climax when 33-year-old Ari Uru-eu-wau-wau is found dead on a road nearby his village.

The Territory combines dramatic storytelling with unique and compelling characters at their heart. A poetic depiction of frogs and butterflies in their habitat is beautifully captured by Pritz to remind us of nature’s picturesque fragility. Visual style and skilled editing enhance the documentary’s dramatisation. The poignant narrative is supported by Vital Farias’ Saga da Amazonia. The cantilena plays throughout the film and sometimes is sang by Neidinha. Pritz’s refined piece of filmmaking is an explicit reflection on the existential ultimatum to both the Uru-eu-wau-wau and the world. Invasions of the their lands have doubled in 2021, meaning that there are now more settlers than Indigenous people in their territory. This uncontrolled deforestation and the ravaging consequences on the climate are inestimable. On the 22nd of August satellite monitoring detected 3,358 fires in the Amazon region, the highest number for any 24-hour period in the past 15 years. Produced by award-winning Darren Aronofsky and Sigrid Dyekjæ, The Territory premiered at Sundance Film Festival 2022 winning the Best Documentary Award. It will be released into UK cinemas on 2nd September 2022.