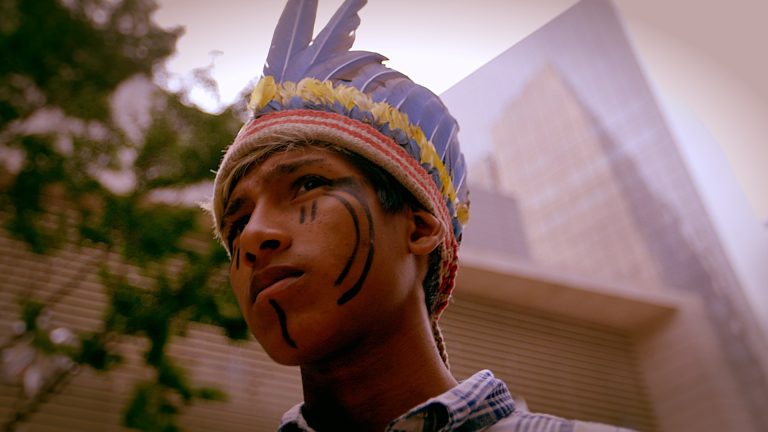 Since Pedro Álvares Cabral’s caravels arrived in Brazil in 1500, the country’s indigenous people have had to fight for survival. Throughout history, several ethnic groups were enslaved, forced to adapt to a culture that was not theirs, exterminated, resulting in extinction for many, and expelled from their territories.

The most recent story of this constant battle, and of the environmental and humanitarian catastrophe caused by illegal miners and farmers (incentivized directly and indirectly by the Brazilian government), is the subject of the documentary Meu Sangue é Vermelho (My Blood Is Red), produced by Brian Mitchell with support from Needs Must Film and direction by Graci Guarani, Marcelo Vogelaar, Thiago Dezan and Tonico Benites.

The film follows the early musical career of rapper Werá Jeguaka Mirim aka Owerá (Kunumi MC), from the Guarani M’bya tribe, who visits indigenous communities in Maranhão (in the north-east region) and Mato Grosso do Sul (in the Midwest Region) to hear leaders talk about expropriation of land and the violence they’ve encountered. The Comissão Pastoral da Terra (Pastoral Land Commission) points out that until the beginning of 2020, the number of indigenous leaders killed in rural conflicts was the highest in 11 years.

The participants’ testimonies reveal the government’s negligence and expose the genocide that has taken place over the years. The facts are reaffirmed with images taken during evictions and destruction of “camps”, forcing some indigenous people to live on the side of roads. There are records of shootings, field disputes and murders, which are complemented with historical moments such as the speech of activist Ailton Krenak in 1987, and the protest with 200 coffins (symbolizing indigenous deaths) at the Terra Livre encampment of the National Congress (DF) in 2019 , which was violently repressed by the police.

Historian Vincent Carelli and indigenous leader Sonia Guajajara comment on this and other situations, including mental health, loss of identity, ancestral relationships and deforestation, faced daily by nearly 1 million people (who declare themselves as indigenous, according to the 2010 Census),

The documentary highlights the government’s lack of interest in causes related to the preservation of the environment and the people who owned the property before the white man set foot. This is essential, because it records a bloody moment in Brazilian history and gives voice to those who are constantly silenced. In parallel, it records the development of an artist who intends to use a global style (rap), to denounce injustices against his peers. To make his voice reach as far as possible, rapper Criolo – one of the best known names in modern Brazilian music – has become a kind of mentor. “He represents the original people of the earth. He represents Brazil, but Brazil before anyone named it Brazil”, says the MC.

Their partnership resulted in the song “Demarcação Já, Terra, Ar, Mar”, written to ask for the demarcation of indigenous lands, a right guaranteed by the Federal Constitution of 1988. “I did the rap because we indigenous people are suffering a lot because of violence and no one sees it. Who will show it? The media will not show it”, he tells Criolo in the studio. By law, the indigenous are the first and natural owners of the territory, and it is the federal government’s obligation to demarcate all lands originally occupied by these peoples (today more than 300 demarcation processes are open). But they suffer from invasions. Meu Sangue é Vermelho is further proof that something urgently needs to be done so that native peoples are not removed from their rightful land, and consequently so that Brazil’s rich biodiversity is preserved.