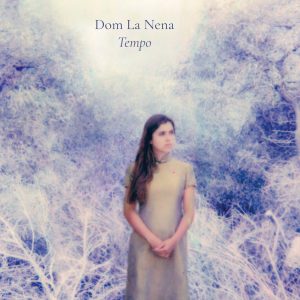 She is young, soft spoken; her vocals are zephyrous, her lyrics without guile, her arrangements demure, and she plays the cello without bombast. At the same time, Dom La Nena is an immensely affecting and gently powerful musician, and poet, really, with a purview unmistakably her own. Tempo, her latest album, demonstrates how in a few short years of recording, she has honed her musicianship into a mature art form.

Tempo underscores La Nena’s intense relationship with the natural world, especially to flowers and birds. The album is like a backyard garden meticulously tended, where the air is fragrantly clean, and the sun splendid, though not always bright. You’ll find no cages in Tempo’s garden, as La Nena’s birds are free flying.

Not coincidentally, Dom La Nena (née Dominique Pinto) has been in flight for much of her life. She was born in Porto Alegre, Brazil, and at the age of eight, moved to Paris with her family. After a stay back in Brazil she left again, for Argentina to study music with cello maestra, Christine Walevska. She returned to Paris at 18 and shortly thereafter began performing, gigging throughout Europe.

La Nena plays all instruments on Tempo: cello, percussion (using just the body of her cello), piano, and vocals. She overlays her instruments and voice on some tunes to simulate a larger, though always intimate, sound. The arrangements and production are her’s as well.

Dreams abound in her songs, sharing space with the palpable sensations and emotions she openly expresses: fear, depression, loss, pain, happiness, and of course, love. While Tempo feels sad at times, as does La Nena, beauty remains, like a feathery cushion on a fluffy armchair, ready to absorb the shocks.

“Tempo,” the song, leads with a graceful baroque melody that vaunts the rich, resonant tones of La Nena’s instrument. Her vocals soon drift over the cello in wordless wispy sighs of melancholia before the piano advances, played predominantly on the uppermost keys here and throughout the album. These tinkly, light and flighty piano notes are reminiscent of harpsichord strains and are a fitting counterbalance in texture to the more sombre, grounded voice of her cello. “Tempo” is a short song. And spare, yet endowed with the fruits of her garden.

When imparting advice on this intimate album, La Nena does so gingerly yet with agency; one gets a good sense that her counsel is coming directly and empathically from her experience. Such is the case with “No Tengas Miedo,” where each short cautionary stanza humanizes a distressing force to provide solace if not rescue. She cautions:

In other evocative abstractions expressed by “No Tengas Miedo,” silence is keeper of the truth and the moon knows to cure all ills. La Nena’s plucked bass and a simple percussive beat give ample space for her advice to be meditated upon.

“Quién Podrá Saberlo,” with especially engaging lyrics, affords us the pleasure of Julieta Venegas’ company on vocals. She shares with La Nena the composer’s wonder about the things that evanesce before her: her dreams, passersby, her beloved swallows, all she has left behind until now. “But where do they go? Who might know?” La Nena asks. We wonder whom she is appealing to as she summons that person who can answer her question, provide security and deliver her from melancholy. “Tu y yo,” she sings, solo, “tenemos tanta historia, tantas ganas, y el amor que es inmortal” (You and I, we share so much history, so many desires, and an immortal love).

As I probed the lyrics of “Quién Podrá Saberlo,” hoping not to dissect but to adequately contemplate them, it became clear how finely imagined and then honed all the tunes are, lyrics and music, without compromising the honesty that infuses all her compositions. It’s a pleasure to try to penetrate the very intelligent yet emotive energy and meaning that La Nena puts into her work.

“Samba Para Voce” is very sweet, very Brazilian, yet the song still runs through the introspective vein that characterizes Tempo. It’s a love song offering La Nena’s lover all that she has to give: samba. The rhythm is languid; it’s like a samba lullaby. To hear the lyrical strains of her classically bowed cello under her light, suggestively Afro-samba beat, is her tribute to the Brazilian roots of her music that one might otherwise think she’d dusted off before her explorations.

Tempo is a lovely album. Each track should be savoured for its story as much as for all aspects of its well-conceived and gratifying music. It is lush and evocative with images of the natural world and heady with La Nena’s sentiments, intimacies and references to dreams whose mysteries and meanings may be shared by all. With Tempo, Dom La Nena has gifted us with her mastery and her soul.