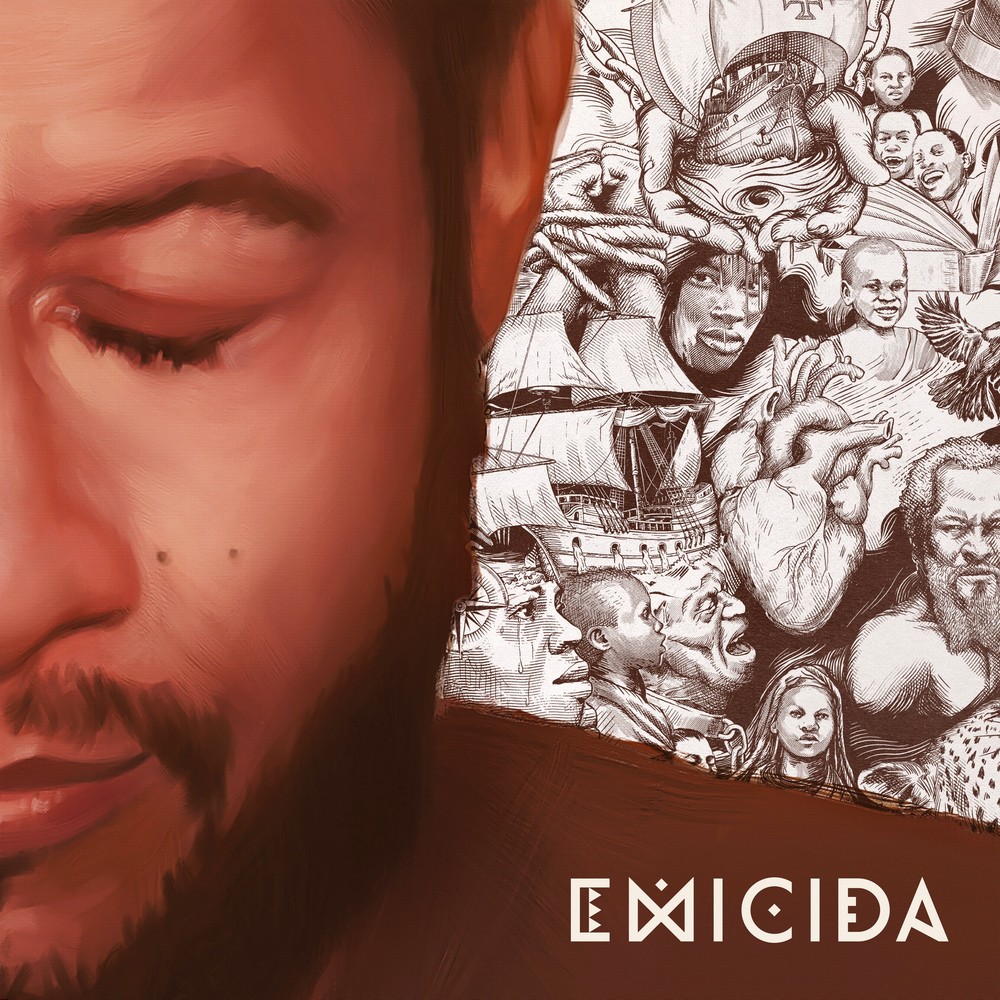 “Smiling kids, hip dancing, nightmares around them trying to steal their happiness and everybody […] busy doing their homework” are the most distinct memories that Emicida brought back home from his trip to Africa. Last year, the Brazilian MC spent 20 days between Cape Verde and Angola, where he met and artistically interacted with local musicians. Once back in São Paulo, he felt the need to translate all those images and pictures into music and the result was published a few months later in Brazil with the title of Sobre Crianças, Quadris, Pesadelos e Lições de Casa…. Now the album has been released worldwide with an English title (About Kids, Hips, Nightmares and Homework…), translated lyrics, new artwork and an extended booklet by Sterns Music.

However, the notes, lyrics and inspiration remain the same. They represent a bridge between Western Africa and Brazil, drawing fully on the culture and music traditions shared by those regions. In fact, the album, which was initially baptized Ubuntu, fully embodies the meaning of the Bantu term. Through About Kids… Emicida is keen to revive the bond between the two shores of the South Atlantic Ocean, their similarities and common identities. The musician temporarily takes off his rapper’s clothes to change into those of the researcher seeking and displaying that musical link throughout his work.

If the first single from the album, “Boa Esperança”, easily recalls the past production of the MC, affirming with its lyrics, beats and video the characteristic sharp and acute nature of Emicida style, there are many other chapters that wink at African rhythms and vibes and transform the mood of About Kids… Examples are “Mufete”, which evokes cheerful Angolan semba music, “Baiana” and “Madagascar” with their soft, almost lounge Cape Verdean feeling. Three songs which, thanks to the help of remarkable musicians like percussionist João Morgado, Kaku Alves (best known as Cesária Évora’s guitarist) and Caetano Veloso with his unmistakable touch, effortlessly drive your mind to the African origins of these sounds. But it’s arguably on tracks like “8”, “Casa” and especially “Mandume” where the amalgam of styles and references flow perfectly. Angolan state-of-the-art grooves, upbeat West African arrangements envelop Emicida and fellow MCs rhyming to create a brand new well-rounded version of the Afro-Brazilian urban sound.

Emicida spent only 20 days in West Africa, but it sounds like he was born there. He fully embraced the musical attitude of the region, adopting it and transporting it into About Kids, Hips, Nightmares and Homework…. In this way, the album inevitably reflects what the musician saw and listened to during his trip. It picks elements from the African roots of Brazilian culture (like the aforementioned semba), but also exposes its most contemporary aspects making today’s São Paulo the most appropriate setting for his stories to unfold.

About Kids, Hips, Nightmares and Homework… is released by Sterns Music and available from Amazon UK, Amazon US and iTunes.