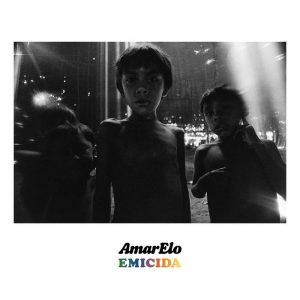 AmarElo is the third studio album by Emicida, an established Brazilian rapper and progressive black voice of Brazil. Emicida had over 250 million Spotify streams even before his third record was launched. But be aware, AmarElo is not what you would expect from a rap record. It is a profound dialogue with several Brazilian music genres bringing a singular result you may have never heard before.

On the album music genres dialogue with each other and an eclectic list of collaborators join in, making for a record that instantly sounds familiar. Established samba composer and singer Zeca Pagodinho, renowned actress Fernanda Montenegro, as well as Marcos Valle, Dona Onete and Brazilian gospel-singing pastors Fabiana Cozza, Pastor Henrique Vieira and Pastoras do Rosário, are just some of the names to feature. It will be very hard to beat Emicida’s creativity this year, on what may well be the best new Brazilian album you will hear in 2020.

The first track “Principia” is a great introduction with its precise rhyme, sophisticated instrumentality, showing from the start the purpose of the record is for each track to carry a spiked meaning with direct lyrics and a clear message in a brilliant, unexpected way.

“AmarElo”, the track that gives name to the album has Majur and Pabllo Vittar, LGBT artists, as collaborators. The song has one of the strongest lyrics in the album. It also has a powerful and catchy sample from Belchior’s song “Sujeito de Sorte” (Lucky Guy):

“I’ve been bleeding too much, I’ve been crying my eyes out,
Last year I died, but this year I’m not going to die“

Emicida’s new album is nostalgic, political, incisive and sends an optimistic message, accompanied by brilliant instrumentality. It’s an album all about connections, represented up to its title, AmarElo, named after a poem by Paulo Leminski called “Amar é um elo”. “Amar” and “Elo”, divided by two words, mean “love” and “connection”. Together they mean “yellow”, a warning colour, which can have multiple meanings. It could be interpreted as a call for Brazilians to pay attention to our own connections, especially important considering the current political and social crisis in the country.

The record is a poetic response to violence, injustice, burgeoning gender and racial inequality and an increasing religious divide in Brazil. AmarElo is music of resistance, offering hope and a message of tolerance and love with a guiding proposal to cherish and respect faith regardless of colour or class.

AmarElo is released by Sterns Music on CD/vinyl/digital and available on Bandcamp, Spotify and other platforms