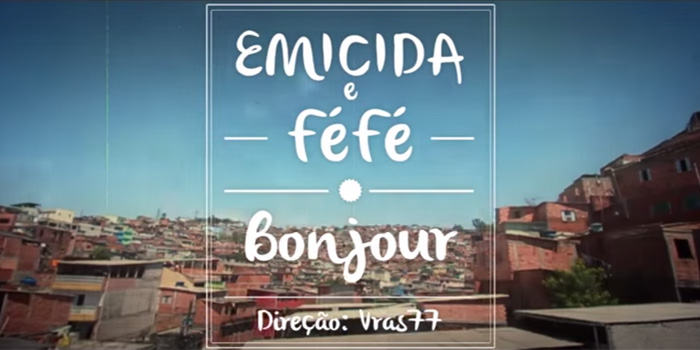 Emicida and Féfé Team Up For A Brand New Single, “Bonjour”

Fresh from teaming up with Lucas Santtana, French rapper Féfé is back with another transatlantic collaboration, this time partnering São Paulo’s Emicida for a new single, “Bonjour”.

After meeting in São Paulo’s Virada Cultural city-wide festival in 2014, Emicida and Féfé met up again in Paris and later, back in São Paulo where the two discussed their ghettoes and making music together. This soon evolved into “Bonjour”, a track which speaks of equality and the similarities from their respective homes. “Bonjour” was produced by Emicida’s long-time collaborator Nave (who has recently found much fame as the beat-maker for Karol Conka). The accompanying video was recorded in streets of Jardim Elisa Maria, a suburb in Northern São Paulo.

“Bonjour” is available to buy from iTunes.

Emicida will be performing in London on 24th April (as part of La Linea 15) and touring France in April with Féfé. They will be playing at Festival Le Printemps de Bourges on April 27th and in Nantes on April 29th. More dates will be confirmed soon.