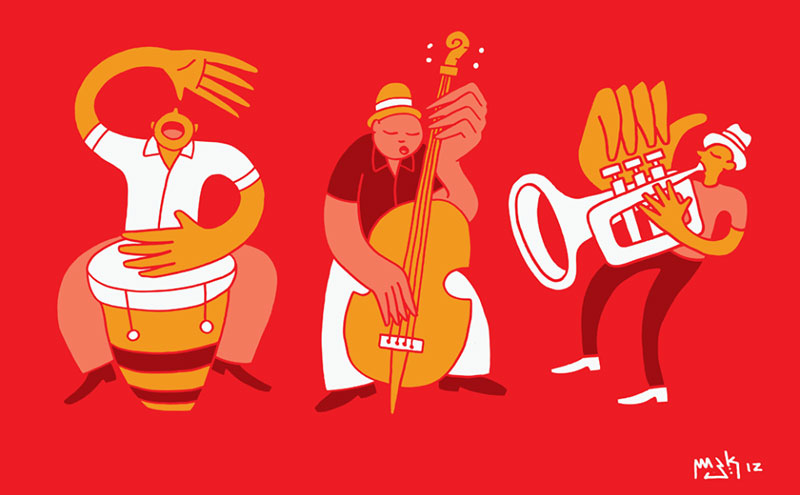 Yes, there’s cumbia in Brazil! In a country so rich in rhythm, I’m glad to introduce you to this unofficial, yet popular, style of music.

Cumbia was brought to Brazil by Amazonian radio in the mid 50s and throughout the 60s. In fact, the radio played a major role in the diffusion of styles like rumba, bolero and merengue in Brazil, but there was something special about cumbia. In the state of Pará, musicians were ready to incorporate, mix and serve cumbia in their own inimitable way, creating a new Brazilian-hybrid of cumbia that had it’s own special swagger.

Since then and right up to the present day, cumbia has been one of the reference styles in bailes (parties) all over the country. With their orquestra (orchestra), that’s exactly where “la cumbia de los pajaritos” (“la danza de los mirlos”, from Perú) became the Brazil-ified “a cúmbia do passarinho”.

Today, cumbia has changed. The orchestra continues, and the guitar driven bands too, but there’s also an electronic counterpart. Digital cumbia is all over South America, appearing in the hispano-american suburbs of almost every country. The style has influenced worldwide DJs, musicians and producers. This is the case in Brazil too, where tropical beats (of which cumbia ranks as the godfather) are well-represented all over the country.

This Cúmbia do Sabiá mixtape includes 13 Brazilian cumbia tracks. Choosing the tracks was not easy, as there are so many artists, from north to south, who have been representing the style since the 70s. Instead, I focused on the contemporary scene and artists that may not be 100% “cumbia” but that have been heavily-influenced by the style. These tracks try to show the breadth of cumbia’s influence in Brazil: from Bélem with Felipe Cordeiro, Gang do Eletro and Lia Sophia; Pernambuco with Superlage, Kakau Góis, Otto and Academia da Berlinda; then a quick stop in Brasília with Criolina and Sacassaia; and São Paulo is very cumbiera too, with A Espetacular Charanga do França, DJ Tide and DJ Nirso all featuring.

Many thanks to Criolina, DJ Tide, Felipe Cordeiro, DJ Vega, Emiliano, Marcello MB Groove and Nirso for their help, and special thanks to DJ Incidental for his “é muita safadeza” voice.