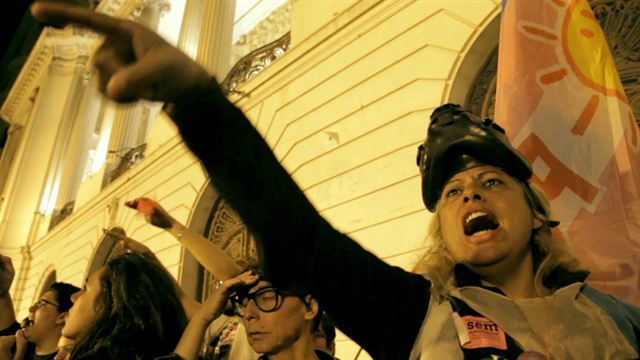 While Brazilian cinema is suffering severe cuts to its funding, it is also showing its strength at some of the major film festivals of the world. The prestigious Cannes film festival has announced the participation of five Brazilian films at four different sections of this year’s edition. Two Brazilian productions will compete for the Palme d’Or: Bacurau, by Kleber Mendonça Filho and Juliano Dornelles; and The Traitor, by Marco Bellocchio. The 72nd edition of Cannes takes place between 14th and 25th of May.

Bacurau, a combination of western and science fiction, brings a town full of secrets to the Brazilian sertão. The main cast is composed of Sonia Braga, Udo Kier and Karine Teles. The Traitor, by Marco Bellocchio, tells the story of Tommaso Buscetta, an Italian mobster who took refuge in Brazil.

Two other Brazilian films are part of the Un Certain Regard, a non-competitive section of the festival. The Invisible Life of Euridice Gusmão by Karim Aïnouz focuses on the complicity between women, a chronicle of the female condition in Rio de Janeiro in the 1950s. Carol Duarte, Julia Stockler, Gregory Duvivier and Barbara Santos are part of the cast. The film also counts with the participation of Fernanda Montenegro, the first Latin American woman to be nominated for an Best Actress Oscar.

Sem Seu Sangue by Alice Furtado is part of the Quinzaine de Réalisateurs section of the festival. Indianara by Aude Chevalier-Beaumel and Marcelo Barbosa will be shown at ACID, a section that privileges experimental independent films and films of a political nature. The title character of Indianara is a trans activist fighting for the survival of transgender people in Brazil.

It is the first time five films have represented Brazil at Cannes and is a result of years of investment in the film sector, which has been growing immensely in the country. The irony is that this announcement is happening at the same time as Ancine (Brazilian Film Agency) have frozen film funding entirely. Producer Tatiana Leite, from Bubble Projects, says: “They [the government] are trying to decimate a sector that generates 300,000 direct jobs and an income of billions, and that brings something immeasurable: the audiovisual exports our culture and our voice, with more power than any other sector.”