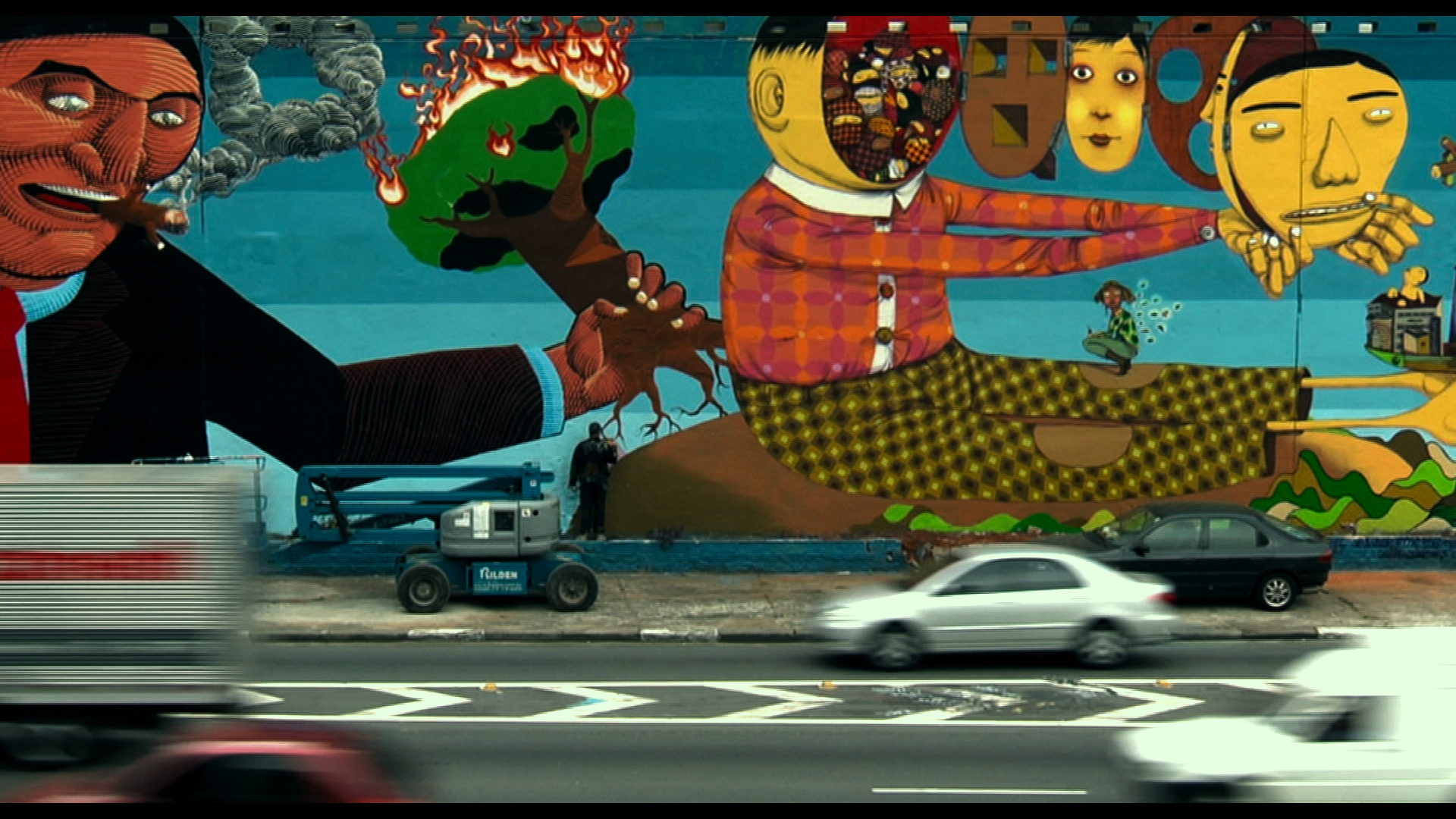 What is art? Perfectly blended colours on a canvas? Sharp simplistic lines crossing over each other creating angles that don’t make much sense but makes you feel a particular way? Sculptures? Tattoos? There is of course, no correct answer since art is such a subjective topic and dependant on someone’s personal taste; this is in my opinion the main issue being talked about in Grey City (Original Portuguese Title: Cidade Cinza), a new documentary about graffiti artists in the city of São Paulo, Brazil.

Directed by Marcelo Mesquita and Guilherme Valiengo, they follow established graffiti artists Nina, NUNCA, OsGemeos, ISE, FINOK and ZEFIX during their project to re-paint a 700 square metre wall on São Paulo’s Avenida 23 de Maio which was erased by a mandate from the City Hall. The help given by the media allowed the artists to broadcast their views nationally and eventually receive an apology from the Mayor (at that time) Gilberto Kassab and request to produce a new mural.

The documentary taps on the origins of most of the artists and their motivation to do what they do, as well as what they feel during the production of their works of art and the light in which people in Brazil tend to see graffiti. They all prove to be extraordinarily talented at what they do and with the purest of reasons to do what they love: give people a voice. It is explained that in the beginning, graffiti artists start out by simply attempting to have their opinions heard, in a city of almost 12 million people who are sometimes stifled by the concrete jungle they live in.

The first thing to come to my mind when the word ‘pollution’ was first said in the documentary was the colour grey, yet the aim of a decree created to prevent visual pollution in a city like São Paulo was to cover the vibrant pieces of street art done by the city’s own people with grey paint – the irony seems too intense to not have been purposefully done.

I, as many Brazilians, grew up with the idea that graffiti was something done by people without education as a means of rebellion and vandalism, but since leaving Brazil and being exposed to such sub-categories that make up the word ‘art’, my eyes have been opened to the fantastic work they actually are; misconceptions taught to children from a very young age shapes their minds for a very long time and sometimes even forever, and this is why the artists are trying to explain to society where they have to change. The inability Brazilians have to not appreciate their own talent unless it’s recognised by international entities is what is holding the country back, but now that institutions such as the TATE Modern have recognised and commissioned such artists to work with them and art galleries asking them to produce graffiti pieces for exhibition, the country’s eyes have suddenly been opened to the amazing street art covering most urban landscapes.

Instead of playing safe and finding a job that might have provided them with a more comfortable life, the artists in this documentary show how happy they are to be doing something they genuinely enjoy and how persistence is important throughout the development of their skills.

Informative. Stunning. Gripping and screaming for graffiti recognition, Grey City is a must-see and must-talk about film just for the sheer fact that many aspiring artists in Brazil (as well as other countries) may have been put off from reaching for their dream because the society they live in does not see their style as a form of art, when they should be encouraged instead. It doesn’t matter if you like it or not, one should never tell someone, or paint over their work because your idea of beauty doesn’t match theirs.

Grey City is available to watch on iTunes. You can find out more information about the film on Facebook