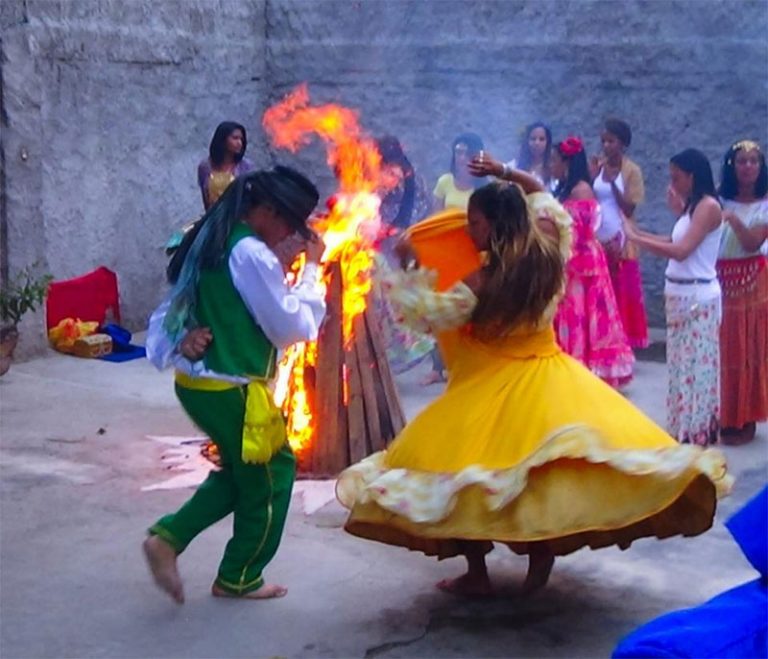 Tent of Gypsy Passage (Tenda Caminho Cigano) is located in the working class town of Nilópolis, one and a half hours by public transport from Rio de Janeiro. I arrive there with my Brazilian friends who are used to a long commute for spiritual experiences. They remind me of a popular saying that goes “a good temple must be far.” With the evangelical Universal Church, notorious for their violent intolerance to ‘non-traditional religions’, just across the street, the temple has no markings outside to signify that it’s there.

Inside, barefoot dancers gather around the fire to celebrate Saint Sarah, patron saint of the Roma people. They blow fans into the faces of a hundred or so guests, inviting everyone into the circle. The majority of dancers are women wearing layers of colourful skirts, blouses, bracelets and necklaces, playing tambourines decorated with ribbons and castanets. Men are dressed in red shirts and black pants with earrings and daggers at their waist. Rice with shrimp, barbequed and dried meats, tropical fruit, soda and alcohol are served on the tables. A recording of Gypsy Kings plays loudly.

The event may appear like a Romani folklore festival, but we are at a temple of the Brazilian Umbanda religion that calls upon the spirits of elderly black slaves, indigenous people, Roma people (called ciganos, Portuguese for gypsies) and other marginalised social groups. As Reginaldo Prandi, a scholar of Brazilian religion, states: “the spirits are not distant and inaccessible gods, but popular brands like us, the common man spirits, a variety that expresses the cultural diversity of the country itself.”

Umbanda emerged in the early 20th century, at the same time as samba, co-creating Brazilian identity based on the mix of African, indigenous and European religious cultures. Umbanda practitioners believe that a spirit can be incorporated in the body of a medium – a congregation member who communicates between the world of the spirits and living human beings – in order to offer spiritual consultations, or charity, to the congregants. In accordance with the teachings of French spiritualist Allan Kardec, the lower spirits are rewarded for their charity with an evolutionary step up the ladder of reincarnation. A medium enters a state of trance though ritual music, surrendering to a spirit while dancing. Next to the walls of the temple, separate tables covered with cards and jewellery boxes are set for conversations with the spirits. One by one, mediums interrupt their dance to sit down for a consultation, to share tips of love affairs and planning for the future.

Each medium has its own way to reenact the spirit of the cigano through dance movements, and a unique way of speaking, usually in Portunhol, interspersing Portuguese with Spanish words. They use props, like a gypsy tambourine, that remind the spirit of their earthy life. An outsider who walks into an Umbanda ceremony may get an impression that this is an interactive theatrical (even vaudevillian) performance. Some Brazilian Romani and their descendants may attend these ceremonies to receive psychic communications from their ancestors. However, the majority in the audience here are not ethnic Romani but a diverse mix of Brazilians who search for spiritual advice.

Since they were expelled from Portugal in the 16th century and until the late 20th century, Brazilian Romani were persecuted by their neighbours, the church and the government, as outsiders, heretics, swindlers, thieves and barbarians. Brazil is presently a home to almost a million Roma people, one of the largest communities in the world. Centuries of persecution led to a significant loss of the language and traditions. The Romani language was forbidden by the government until recently and is now only present as separate words and expressions mixed in with Portuguese.

Until the late 20th century, there were very few realistic accounts of Brazilian Roma daily life. Julia Zakia’s poignant and poetic cine-essays (The Gypsy River, Tarabatara, Pedra Bruta and Santa Sara) represent candid new trends in Romani studies. The characters in her films call themselves Catholics, as do most of Brazil’s Roma people, but they don’t spend much time in churches, except for marriages and funerals. Traditional sacred Romani rituals were dedicated to fire, rivers, earth, wind, plants (sacred and medicinal) and animals. There is a joke about a Romani who, when asked about his religion, replied, “The one you prefer,” or a Romani who said he was baptised in the Orthodox Church, because the Catholic priest was not at home. The religious diversity and all-embracing of nature are characteristics of Romani culture that are aligned with the universality of Umbanda. 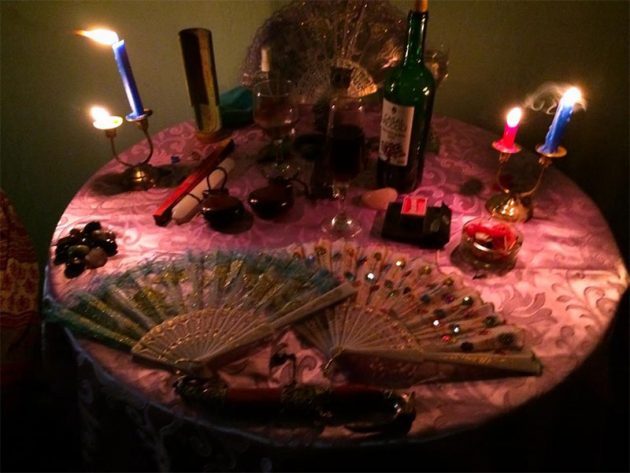 Several elements of Romani culture have contributed to ciganos mythology in Umbanda. Romani traditions are not preoccupied with historical traumas. Forgetting calamities of the past is a trick in the art of living and survival: in the words of a Romani proverb, “it is more important to eat bread than to know how it was made.” This forward-looking mentality, in addition to palm reading, that is popular with their Brazilian neighbours, has secured ciganos a unique role as fortune-tellers in Umbanda.

Romani folklore that praises freedom and calls the entire world its motherland has contributed to a utopian vision of ciganos as eternal nomads free to choose their endless roads. “Why have I never lived in only one place? Because I feel very bad breathing the same air,” confesses one of the characters of Julia Zakia’s Tarabatara that narrates nomadic journey of one gypsy family in Alagoas, a semi-arid region in north-eastern Brazil (the 23 minute long film is available online at vimeo.com/52733077).

The spirit of ciganos, similarly to Romani folklore characters, enjoy festive meals with wine and sweets, singing, dancing and playing music. The spirits often talk about suffering in their earthly love affairs because of the arranged marriages and lack of freedom of choice. They return to earth to Umbanda temples as advisors in amorous matters, as guides in infinite possibilities of love in a typical Umbanda twist of reverse symbolism when the powerless become deities.

No negative images are enacted in Umbanda incorporation ceremonies. On the contrary, cigano spirits appear in Umbanda as ‘Children of the Wind’, portrayed as romantic stereotypes of free eternal travellers, experts in love affairs, clairvoyants, happy party-goers and great musicians. Umbanda’s ciganos present a rare case of Romani xenophilia that goes much deeper than the European fascination with gypsy mysteries. Some ethnographers believe that xenophilia is not helping to improve tolerance, as it stresses cultural differences in an unnaturally exaggerated way. Umbanda’s intentions, however, are far from racial and cultural prejudice. Spirits here are signifiers of the desired identity to be obtained in the state of trance. Ciganos in this context symbolize freedom, beauty and the promise of a better future. The magic, music, dancing and singing of Umbanda lead to an alternate reality and provide its practitioners with tools for spiritual self-discovery.

Some Brazilian Romani activists, including Nicolas Ramanush, a leader of an NGO Embaixada Cigana do Brasil (Brazilian Gypsy Embassy), agree that stereotypical cigano spirits of Umbanda have little in common with traditional Romani culture. Ramanush told me that he sees a great danger in creating ‘false’ ciganos culture when non-Romani mediums, who believe that they receive cigano spirits, spread values that never existed in Romani communities. In Romani rituals there are no possessive spirits, and ‘Portunhol’ is not spoken. Julia Zakia similarly told me that the Romani of the encampments wouldn’t recognize themselves in the mirror of Umbanda.

Nevertheless, the reality on the ground shows that many Brazilian Roma accept and promote romanticized stereotypes enacted in Umbanda. There is a number of esoteric bestsellers written by middle class Roma with titles like “Gypsy Cards” and “Mysteries of Gypsies”. These books can inspire Umbanda Ciganos mediums and Brazilians looking for “consultations with Ciganos.” One of the creators of Ciganos Umbanda theology is Aderson Bagesteiro who lives in Porto Alegre, south of Brazil, and strongly identifies with his Spanish Roma ancestry. Aderson sees the religion as a natural and potent tool for preserving and developing his spiritual heritage and improving the image of Roma among Brazilians. Ethnomusicologist Carol Silverman discusses similar trends among Romani musicians and fortunetellers from the Balkans who “self-stereotype” and “self-orientalize” using the tropes of “exotic others.” She concludes that “these tropes may be good for business, but more importantly, they are but one of many labels and identities that Roma embrace.”

As the night moves on, the dancing at Tent of Gypsy Passage is intensifying, the campfire raising to the height of the garden walls. Most of the guests, including my friends, are falling into a state of trance under the guidance of the mediums and the cigano spirits.

Umbanda is a fascinating Brazilian religious movement of spiritual self-discovery that must be experienced by every open-minded traveller. I attended dozens of spirit possession ceremonies during the last seven years, but only at the ciganos temple did I finally open up to the vibrations of the supernatural. I danced around the fire all night long with colourfully dressed ciganos that whispered “Opcha, Opcha Santa Sara Kali (Viva, Viva Saint Sarah)” in my ear. I was turning into Cigano Ramiro and my other identity was melting away.