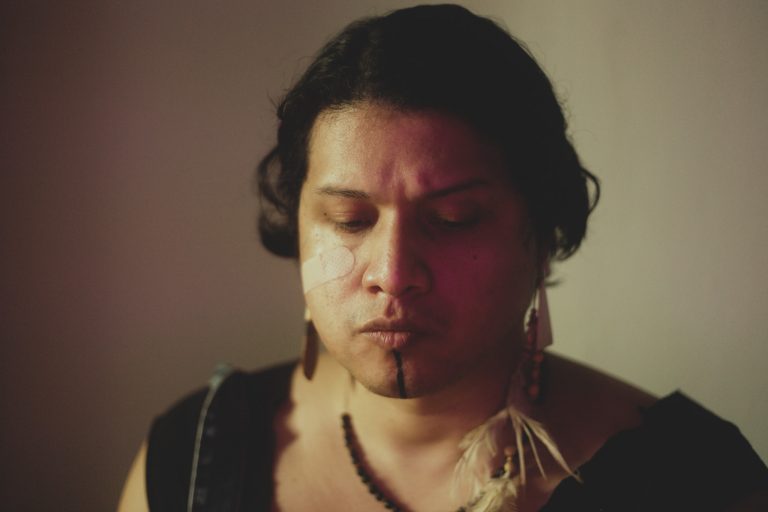 Indigenous Electronic Music of Brazil: An Interview with Nelson D

How was Brazil born? We are told by books and didacts that a group of Portuguese explorers docked on our coast in the mid-1500s, and following a series of events told by those who won, today we declare ourselves a nation.

The story I am going to tell you is about the first eyes that received that group here, a group that has not always (if ever) had a privileged position in the annals of history: the Brazilian Indian.

But calm down, let’s not go back to the Tupi-Guarani lessons, villages and other subjects that we dealt with at the beginning of our social education. I’m not talking about any Brazilian Indian.

In 1986, an indigenous baby was found on the streets of Manaus, capital of the state of Amazonas. Without registration or name, he was kept in an orphanage in the city, until an Italian couple adopted him and took him to the Old Continent.

Now registered with a name and even a passport, the baby is now called Davide de Merra and has the city of Savona as his new home. A naturalized Italian citizen, Davide studied Arts at the Faculty of Milan and after a long trajectory of adaptation, resistance and struggle, Davide gave life to Nelson D, an incredibly complete artist.

An electronic musician; Indigenous, Brazilian, European and a citizen of the universe, today he resides in São Paulo, land of so many indigenous nomenclatures, as well as Anhangabaú, Tatuapé, Ibirapuera and Butantã, now Nelson D translates into Tupi-Portuguese together with surprising beats and arrangements a native and transcendental perspective on everything he has discovered from his rescue until now.

With powerful horns and kicks, Nelson D surprises with every production, which right now encompasses ten singles, an album and several participations as co-producer and beatmaker for other artists.

We called him for a chat and the rest of this intriguing story you can read below:

What is your name and your indigenous origin?

I was found on a street in the city of Manaus (probably in a public parking lot), I have no clue about my biological parents. I chose the stage name “Nelson” because it was the name they gave me at the orphanage and the letter “D” which is Davide’s initial, the name my adoptive parents gave me.

The orphanage staff advised my adoptive parents about my indigenous origin because of my phenotype and for common cases of abandoned children in the city of Manaus, an identity that was confirmed after I did a DNA test to discover my offspring even without having been able to find my own biological parents and my ethnicity.

How did this musical / artistic wave start for you?

I was raised in Italy, and it was there that my musical training began. In my teens I worked as a DJ and stage technician in a nightclub in my city. I used to listen to a lot of English electronic music like Chemical Brothers, Tricky, Prodigy, Asian Dub Foundation … Rock and hip hop were also very present in my daily life. Then I started to feel like creating my own tracks and collecting programs and machines to produce.

In addition to singing and producing your own beats, you are the director of your projects and write your own lyrics. This artistically is a dream. How is it for you to take on all these fronts?

I have dedicated my entire life to becoming a sufficiently complete artist. I graduated in Fine Arts in Milan exactly in order to become as autonomous as possible when it comes to completing my work.

Of course, there are arts forms where I still need to mature a lot, but the fact of already mastering some, gives me a lot of agility in the creative process.

Your production pace is incredible, last year alone there were ten releases and all of them with a unique language full of natural indigenous elements and instruments combined with very intense elements of r&b, trap and funk. What are your musical inspirations?

First I thank you very much for the compliment!

As a teenager I listened to many electronic music artists who already mixed various styles. I have always been attracted to music that mixed rock with electronics or in general artists who managed to create their own language and identity.

Lately I have been very impressed with new artists like Son Lux, Young Fathers or with artists like FKA Twigs or Sevdaliza. These artists do not influence me through their sounds but because they encourage me to look for my artistic path.

You are also a beatmaker for other artists. How do you work on these collabs? Are they natural productions among friends or do people come to you with demand?

I’m actually trying to stop. I feel the need to focus on my solo work and not be recognized as a producer or beatmaker, but as an artist. Producing other artists was good, maybe I will continue to collaborate but my goal now is to make my art and my vision come true.

Last year you finished an album called Em Sua Própria Terra [In Your Own Land]. Do you consider yourself today in your own land?

Brazil is my homeland, but I think I will continue to live my life with the feeling of living mentally in a limbo between different worlds and cultures … And I like that…

From his Tupi-Portuguese singing, it is clear that his accent is more present in his interpretations. What is more difficult for you, singing or composing in Portuguese?

Both. Neither Nheengatu (the Tupi I use) nor Portuguese are my mother languages.

When I think of a letter, I think of it in Italian. However, this difficulty ends up helping to create my identity.

I am Indigenous, Brazilian, European and Italian. This whole mix translates into my way of singing and making music. With my art I also want to show that identity is something more complex, full of layers of readings, impossible to solve in a few definitions, especially when talking about art.

We are the fruit and we share a debt with you about how Brazil happened some centuries ago. Your lyrics report a little of this with a lightness and at the same time a very strong force. How do you see this context today within society?

They are very delicate and complex dynamics to be solved. Personally, what I feel most urgent at the moment is to develop a perception of the Brazilian people as a single people and not as a historically forced junction of different groups (however much that is in reality), in order to develop a general empathy that embraces all social groups. On the contrary, in the current situation I see a great lack of empathy and distances between the various classes and social bubbles. On the one hand, I think that socially marginalised groups have already pointed out the fundamental urgencies of the country several times.

On the other hand, I see a class with a lot of power of action that is insensitive and distant, not understanding that results such as social equity, direct health and respect for the environment are benefits for the entire nation, and not only for part of the society. The need for understanding and alignment between us Brazilians is urgent.

In the lyrics of “Xenofunk” you bring the antithesis between the indigenous and the ‘white man’, between their syncretisms and differences. In the last sentence of the chorus it says “The difference brings me closer to you”. Where do we find ourselves in the differences?

In “Xenofunk”, I treat xenophobia as a broader and more universal argument, as much as that is possible. However, yes, it is full of references to the Brazilian social situation. Brazil is a country full of very different social groups. Depending on how we see this feature we can decide to make it an obstacle or a force in our favour. Therefore, for me, differences are and must become synonymous with wealth, opportunity and strength. As I said before, all this is possible if the interaction between different groups is to act with respect, alignment and empathy. And it is in this collective interaction caused by the differences that we meet with each other (to me looking like a demagogue!).

If this is a utopia I think we still have room for action to check.

What is music to you?

Music is my favourite instrument to ask myself if my perception of life makes sense or not.