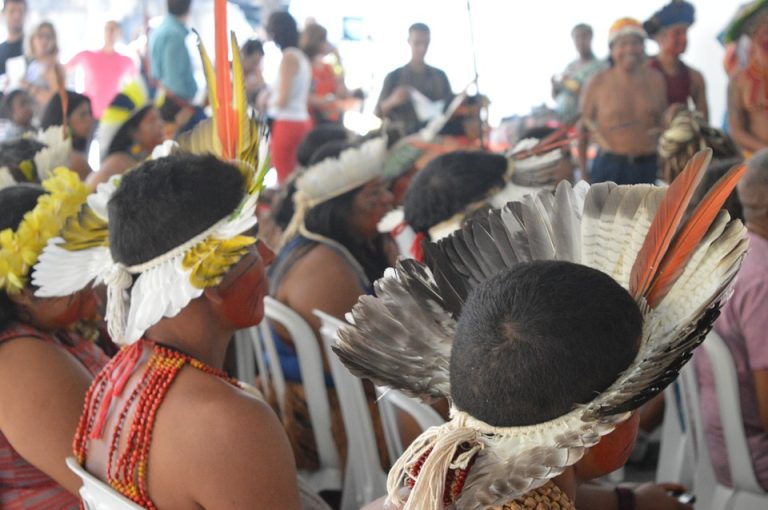 Indigenous Groups Accuse Brazil’s Bolsonaro of Genocide, Call on the ICC to Investigate

Indigenous groups in Brazil are calling on the International Criminal Court (ICC) to investigate President Jair Bolsonaro for genocide and ecocide.

The Articulation of Indigenous Peoples from Brazil (APIB) filed a statement with the ICC accusing the Bolsonaro administration of genocide and has requested that the ICC’s prosecutor examine the crimes perpetrated against the nation’s Indigenous peoples since Bolsonaro took office in 2019.

“We believe there are acts in progress in Brazil that constitute crimes against humanity, genocide, and ecocide. Given the inability of the justice system in Brazil to investigate, prosecute and judge these conducts, we denounce them to the international community, throughout the International Criminal Court,” said Eloy Terena, APIB’s Legal Coordinator.

There are currently four crimes listed under the Rome Statute of the ICC: genocide, crimes against humanity, war crimes, and crimes of aggression. While initially considered by the ICC in 1998, ecocide was removed from the drafting process of the Statute. However, there is a growing global call for the Rome Statute to be amended to add ecocide as the fifth crime.

APIB released a Dossier compiling data and information to support their allegations against the Brazilian President, noting that the administration has had a history of anti-Indigenous policy.

“We are calling to action in Brasília, in the midst of a pandemic, because today the Federal Government’s anti-Indigenous agenda represents a more lethal threat than the Covid-19 virus. The lives of Indigenous Peoples are linked to their territories and our lives are under threat. We will be mobilized in the communities, in the cities, in Brasília and in the court in The Hague to hold Bolsonaro accountable and fight for our rights,” stated APIB Executive Coordinator Dinamam Tuxá.

This is not the first time the ICC has been requested to investigate Bolsonaro over claims of genocide. In 2019, human rights groups called for Bolsonaro to be indicted at the Court for genocide against Brazil’s Indigenous peoples.

Since assuming office in 2019, Bolsonaro has made a series of controversial decisions and statements regarding the country’s Indigenous peoples and the Amazon rainforest.

“Jair Bolsonaro has constantly affirmed violent and discriminatory discourse and acts against Brazilian Indigenous peoples and has obstructed, through administrative and legal acts, the integrity of demarcated land and the conclusion of territorial demarcation processes,” APIB states in their International Complaints Dossier.

Amazonian deforestation has increased since 2019. Last year, scientists estimated that more than 11,000 sq km of rainforest were destroyed from August 2019 to July 2020- nearly a ten percent increase since 2018.

Illegal logging and mining have long plagued the country but have seen a substantial increase in recent years.

In May 2021, illegal gold miners invaded and violently attacked a Munduruku village in the state of Pará. The miners fired shots and set several houses on fire in the village. The attack was believed to be prompted by a news leak of a police operation aiming to remove illegal miners from the Munduruku Indigenous Territory.

Similar attacks happened to the Yanomami community in northern Brazil. Home to less than 27,000 Yanomami, the territory has been the target of multiple violent invasions. In the last two years, more than 20,000 gold miners have invaded Yanomami territory, leading to increased environmental devastation and a surge in infectious diseases such as COVID-19.

Indigenous groups are awaiting the decision of the Supreme Federal Court (STF) regarding Marco Temporal, a “legal thesis that restricts the constitutional rights of Indigenous peoples.”

According to APIB, this would vastly impact Indigenous land rights, resulting in Indigenous peoples only having “the right to demarcation of the lands that were under their possession on October 5, 1988 – the promulgation date of the Brazilian Constitution.”

If the Supreme Federal Court opts for Marco Temporal, it will legalize past land grabs and violations against Indigenous peoples and could result in a “flood of other decisions annulling demarcations.”

The STF will resume its judgment on September 1st.

Additionally, Brazilian lawmakers will be voting on several major bills in the upcoming months, including PL 490 and PL 2633.

Initially proposed in 2007, PL 490 would disable the demarcation of Indigenous land based on Marco Temporal, restricting Indigenous land rights to the lands occupied at the time of the promulgation of the Brazilian Constitution in 1988. This bill would also allow the government to open demarcated lands for industrial agriculture, mining, and other extractive activities.

“Approval of this bill would be one of the most significant setbacks in the recognition of Indigenous peoples’ rights over their traditional lands and resources since the return to democracy in Brazil almost three decades ago,” stated Anna Lívia Arida, Brazil Associate Director at Human Rights Watch. “It comes at a moment of extreme vulnerability for Indigenous people, who face not only invasion of their lands by miners and loggers, but also open hostility from the Bolsonaro administration.”

Also known as PL de Grilagen, this bill would weaken compliance with environmental law and provide amnesty for land grabbers. This bill would enable the legalization of claims by land invaders illegally occupying public lands, including Indigenous territories still awaiting recognition and demarcation by Brazil’s government.

Now, the International Criminal Court’s chief prosecutor, Karim Khan, must decide whether or not to pursue the cases against Bolsonaro.

“We have been fighting every day for hundreds of years to ensure our existence and today our fight for rights is global. The solutions for this sick world come from Indigenous peoples and we will never remain silent in the face of the violence we are suffering,” stated Sonia Guajajara, Executive Coordinator of APIB.

“He [President Bolsonaro] needs to pay for all the violence and destruction he is leading,” urged Guajajara.

This story originally appeared in The Planetary Press and is part of Covering Climate Now, a global journalism collaboration strengthening coverage of the climate story.