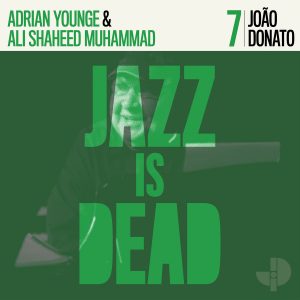 For the seventh edition of their Jazz Is Dead imprint, Adrian Younge and Ali Shaheed Muhammad have turned to the man whom João Gilberto accredited with inventing the bossa nova beat. After picking up a Latin Grammy for 2005’s Sambolero, the octogenarian Brazilian keyboards maestro has continued along his own quiet musical path in the past few years. The last I’d heard of him was the lovely album he made with Joyce Moreno in 2009, Aquarius. Following their sixth collaboration, with Azymuth, on paper Donato would seem like the ideal next cohort for Messrs. Younge and Muhammad: a musician known for his taste and simplicity and strong melodies. All the ingredients we have come to expect with the Jazz Is Dead sessions are here: the retro ’70s vibe underpinned by keyboards and scratchy, fuzzy funk guitar, and coloured by a distinctive mix of flute and tenor sax.

And yet… the familiarity also exposes the limitations of the house sound. Ultimately, despite the promise of the recent single, this is a tad disappointing. The nine numbers add up to a somewhat paltry 26 minutes and fail to ignite until the final “Conexão”, which exudes a little more collective cosmic fire, with the sax, electric guitar and keyboards working together with urgency to leave a more indelible impression. Elsewhere, there are some fine moments to savour: some sweet romantic vocals by Loren Oden on the opening “Não Negue Seu Coração” and the current single, “Forever More”; the added flute that complements Donato’s wistful piano motif on his ode to “Adrian Ali and Gregory”; the combination of sax, flute and soaring synth on “Liaisons”; the seductive waltz tempo on “Aquarius” with its vocal redolent of Lonnie Liston Smith’s albums for Flying Dutchman; the fuzzed-out guitar sound on “Desejo De Amor”. So there’s enough to like – but only just. All in all, I felt a little short-changed by an album that rather pales in comparison to its predecessor with Azymuth. Could do better.

João Donato JID007 is released by Jazz Is Dead