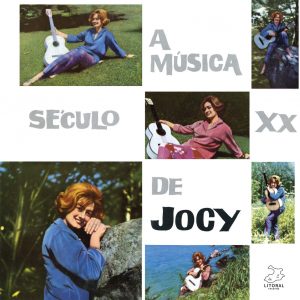 What a strange and intriguing album the new Berlin-based Litoral Records has chosen to inaugurate its exploration of “the intersection of Brazilian popular, experimental and classical music.” The multi-talented Ms. Oliveira, a concert pianist as a child who played with artists like Stravinsky and John Cage, has written four books and composed “seminal works in early electronic and experimental classical music”. This diaphanous elliptical album recorded in 1959 represents her sole contribution to the wonderful world of Brazilian popular music.

So brief that it’s being issued on vinyl at 45rpm, the album consists of 13 pieces that range from the 45 seconds of “Um Crime” to the 3½ minutes of “Frida”, the tale of a woman with one brown eye and one blue, who wanders alone through a desolate landscape in search of a new life. In the latter, the singer recites her poetic lyrics initially to the accompaniment of a gently strummed acoustic guitar before a flute and some delicate percussion give the song wings. With frequent spoken voice-overs and impressionistic sound effects, such as the cries and whistles of “Um Crime” and the siren and sounds of fire on “Incendio”, the episodic nature of the pieces is reminiscent of a soundtrack to a film of the French nouvelle vague: something like Truffaut’s Jules et Jim, or Louis Malle’s weird and wonderful Zazie dans le Métro. The original publicity that accompanied Jocy’s 20th century music dubbed its style “vanguard samba”. Songs like “O Sorriso da Praia”, sung to the accompaniment of an acoustic guitar, soft understated percussion and a few incidental embellishments, seemingly prefigure the Brazilian new wave that would soon take over the musical world. But her atypical subject matter – fire, suicide, crime, robbery, solitude and such like – and the snatches of classical orchestration look forward more to tropicália than to bossa nova.

A conventional singer-songwriter’s album this is most definitely not. If anything, it’s as singular and as unclassifiable as the meeting of Edith Sitwell’s poetry and William Walton’s music in Façade, An Entertainment. Despite the frustrating brevity of certain numbers that could become songs as fully realised as, say, “Um Assalto no Morumbi” (with its extraordinary percussive whispered-voice effect), this fascinating release has certainly prompted me to find out more about Jocy de Oliveira. I look forward to Litoral’s subsequent records.