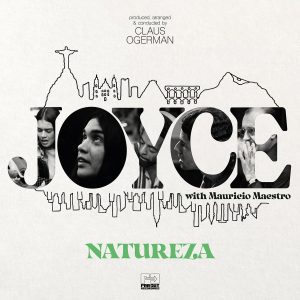 London’s Far Out Recordings label seems to specialise in unearthing lost masterpieces by someone who has become in a sense its artistic figurehead, the singer-songwriter formerly known as Joyce. In 2009, the label resurrected the exquisite Visions of Dawn, recorded in Paris in 1976 with compatriots Naná Vasconcelos and Mauricio Maestro. Now, a mere 45 years after it was recorded in New York’s Columbia studios under the aegis of the celebrated German producer, Claus Ogerman, Natureza is available in physical form. Again recorded with Naná Vasconcelos and Mauricio Maestro among an all-star cast, the album fully warrants any claim for it as “buried treasure” or a “lost classic”.

So why on earth did we have to wait so long? I suppose it’s symptomatic of the way that Joyce Moreno has never to a degree received her just critical desserts. Even after a career of over 50 years the artist described by Antonio Carlos Jobim as “one of the greatest singers” is rarely placed at the top table with the likes of Gal Costa, Maria Bethânia or Elis Regina – despite the fact that she writes songs that stand the test of time, plays a mean acoustic guitar and sings like an angel incarnate. Natureza is proof, if proof is still needed, that Joyce Moreno is one of the greats.

It was to be her international breakthrough. Joyce was living in New York at the time, where she met Claus Ogerman. He liked what he heard and they decided to do an album together. The producer assembled a host of golden jazzmen to support Joyce: Naná, Mauricio and husband Tutty on percussion: musicians of the calibre of Michael Brecker on tenor sax and Joe Farrell on flute. It was a big production, with Ogerman contributing the arrangements and conducting the orchestra. Joyce went home to Brazil afterwards, but remained in contact with Ogerman. There was talk about her re-recording the vocals in English, which the singer “wasn’t too happy about. But then I got pregnant with my third child and could not leave Brazil. And little by little our contact became rare, until I lost track of him [Ogerman] completely. And that,” she resigned herself, “was it. I never heard from him again.”

The opportunity passed and Ogerman failed to find a major label interested in another Brazilian singing star. Well, what a shame; what a sorry tale – because the songs, the singing, the playing, the arrangements are all top notch. Kicking off with the 11-minute version of Joyce’s early hit and proto-feminist anthem, “Feminina”, a long infectious jazzy jam, the standard never slips. The achingly beautiful “Mistérios” follows, the gorgeous vocal highlighted by the vibes of Steps Ahead’s Mike Mainieri. The vinyl A side ends with Mauricio Maestro singing his own composition, “Coração Souhador”, which features solos from Brecker and Farrell, some lovely acoustic guitar playing and Buster Williams’ prominent bass. Written it seems for husband Tutty, “Moreno” opens the second side with a similar groove to “Feminina”. It’s followed by the second single taken from the album, “Descompassadamente”. With Joyce’s ethereal voice double- or multi-tracked, there’s another fine Farrell flute solo and arguably the producer’s most elegant orchestration. On the album’s other more extended number, “Ciclo Da Vida”, Joyce takes a backseat vocal role to its composer, Mauricio Maestro. And on the suitably upbeat closer, “Pega Leve”, we hear her infectious trademark scatting as she exchanges licks with the brass section.

Enter Joe Davis and Far Out Recordings decades later… After listening to this golden album, one can only ask: Why was it left to moulder on a shelf for so long? Full marks to Far Out.

Natureza is released by Far Out Recordings