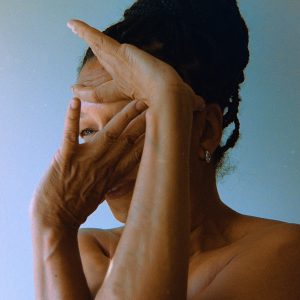 Throughout history, the musical innovations of the African Diaspora have had a defining role in the musical identity of entire nations. Any serious look into the musical history of countries such as the United States and Brazil will show this influence. Juçara Marçal explores these parallel worlds in the title track of Delta Estácio Blues. The song mystically connects African-American blues legend Robert Johnson with his Afro-Brazilian contemporaries, Bide, Baico, and Ismael, who, among other musicians, founded the first samba school. Starting off with an acoustic guitar sample loop that eventually gives way to punchy bass, cuíca cackles and shrieks, “Delta Estácio Blues” warps the referenced tradition.

Marçal and frequent collaborator Kiko Dinucci, whose production is on every track of Delta Estácio Blues, are no strangers to inventive modernizations of Brazilian tradition. Dinucci’s prickly guitar work was an integral part of Marçal’s solo debut, Encarnado, a spellbinding album with a conspicuous lack of a rhythm section. Released seven years later, Delta Estácio Blues is a radically different record, leaving the guitar-focused world of Encarnado for sounds processed through Dinucci’s Roland SP 404 sampler. The elements that remain are constants in Marçal’s catalog: extraordinary singing and intriguing eccentricity.

Lead single “Crash” was a great way to introduce listeners to Marçal’s new approach. Dinucci’s knocking beat lives up to its name, and Marçal’s fierce delivery is the perfect conduit for Rodrigo Ogi’s aggressive lyrics. For those that missed the release of “Crash”, the opening track “Vi de Relance a Coroa”, is a more than appropriate introduction to the world of Delta Estácio Blues. The sampler is in full effect as surges of glitch and static move around synth keys and Marçal’s gorgeous voice. Like the title track, “Vi de Relance a Coroa” covers an aspect of the African diaspora – the coroa (crown) belongs to Malunguinho, an Afro-Amerindian spirit.

The stylistic shift aside, the fact that a song like “Vi de Relance a Coroa” opens a Marçal project should come as no surprise. Blackness has always been integral to her work. Past recordings like “Osanyin” on Metá Metá’s MM3 show how good she sounds in Yoruba, and Delta Estácio Blues has one of Marçal’s best songs in the language, “Iyalode Mbé Mbé”. Marçal repeats an entrancing chant as Thiago França’s sax shifts between jumpy grooves and robust improvisation. All of this, plus interestingly layered percussion courtesy of Dinucci, makes “Iyalode Mbé Mbé” a hypnotizing experience. In addition to Portuguese and Yoruba, Marçal also delves into French with outstanding results on “La Femme á Barbe”. Accompanied by the metallic clangs of Thais Nicodemo’s prepared piano, Marçal and Dinucci twist the Jacques Higelin/Brigette Fontaine composition into a dark synth-laden romp.

Marçal and Dinucci have been a force since Padê in 2008, and Delta Estácio Blues is arguably their most adventurous project yet. The album is a fantastic follow-up to Encarnado because it is an equally impressive flex of different musical muscles. Encarnado had no drums, but eclectic rhythms that hit and shift in a myriad of ways are crucial to the success of Delta Estácio Blues. “Sem Cais” is an excellent example – elastic synth tones, trumpets, and booming drums create a turbulent atmosphere fit for Marçal’s energetic performance. Delta Estácio Blues has Marçal and Dinucci at the top of their game. The album is further confirmation of what Marçal’s discography already suggested – she is an incredible artist.