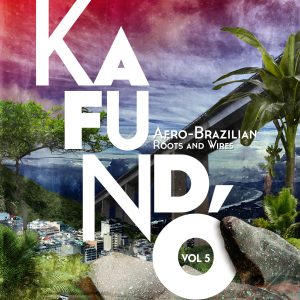 There are few labels as dedicated to electronic music in Brazil as Kafundó Records. Through their compilations, as well as single-artist releases, they’ve showcased some of the inventive productions and ideas that have emerged in this musical sphere that club culture created but which is now inhabited by tracks that sound as good on home stereos as on the dance floor. It’s music for the heart and soul, not just the feet.

They continue their fine work with Kafundó Vol. 5; Afro​-​Brazilian Roots and Wires, a compilation that sees them move away from electronic music a touch with a set of songs influenced by traditional Brazilian rhythms and instrumentation and which, in some cases, include very few electronic flourishes. Yet these are songs that could easily still sound out in any club, with digital beats replaced by vivacious percussion, and with vocal performances as energised as you’d hear anywhere.

As with Volume 3 of Kafundó, it’s the music of the north-east that is featured heavily here, with songs by Grupo Bongar, Samba De Veio Da Ilha Do Massangano, Oyá Tokolê Afoxé and Samba de Matuto Leão da Primavera Maragogi opening the compilation with frenetic Afro-Brazilian rhythms and soulful call-and-response vocals. Whether consciously or not, the compilation then travels away from this heavy folklore into more urban sounds, like those by rapper Thiago Elniño and the experimental breaks of Ubunto. The glory of the album lies in the discussion taking place between rural and urban music, between traditional and modern, and this is something that Kafundó Vol. 5 captures perfectly.

Kafundó Vol. 5; Afro​-​Brazilian Roots and Wires is available from Bandcamp.