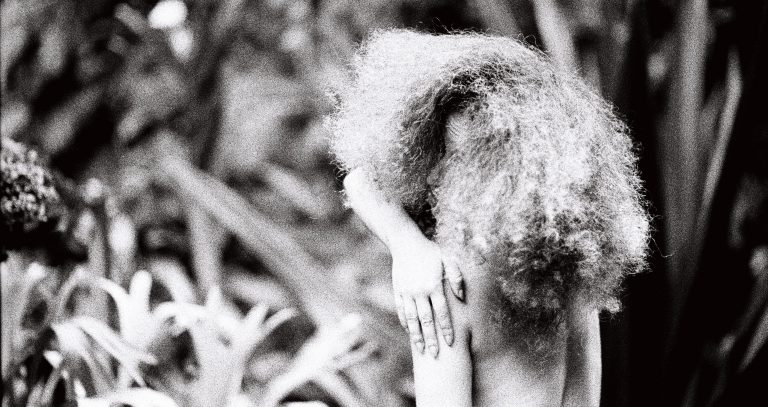 Lascivious Music for Isolationist Times: An Interview with Iara Rennó

Iara Rennó, singer, songwriter, poet, instrumentalist and general artistic renaissance woman has had a dizzyingly eclectic career so far. Born into the Espindola musical family, she began as a vocalist with the legendary São Paulo vanguardist Itamar Assumpção and from then on has followed her own singular path.

Her new self-released album AfrodisíacA, the feminine form of aphrodisiac, interweaves sexual and sensual poetry set to sound art with hallucinatory MPB of the highest order.

It is one of many incredibly creative albums that have been released in Brazil during the pandemic at a time when arts and artists are not only under attack from an austerity-mad and censorious government but also their livelihood has been taken away with their inability to perform live.

Iara has been a constant online presence lately promoting her new album and found some time to talk with me about the album over Zoom.

Firstly, I asked her about the origins of the album. “Ninety percent of it was semi-ready on my hard-drive from various stages”. The material was just waiting for her to find the right project. “The guiding principle of this work were the poems that were written in 2013 and published in my book in 2015, but there are unpublished and new poems on the album as well”.

These poems are in the form of voice recordings performed by an unbeatable list of Iara’s peers: Negro Leo, Ava Rocha, Linn da Quebrada, as well as contributions from the old guard, Arnaldo Antunes, Arrigo Barnabé, and 90-year old Elza Soares on the title track.

The poems are punctuated by electric tropical jams such as “Tara”, a heavy psychedelic maelstrom, sounding like the blues put through the tropicália wringer. The music was supplied by the band that was used to record the Iara album in 2013. I ask if a kind of recycling was used to create the new pieces. “It’s a form of recycling, but when I was reviewing the material I saw that it all conversed with each other”. This is key to Iara’s working methodology, re-appropriating this material, looking for new ways to use it, adapting and renewing previous projects.

Mauricio Takara is a contributor to the musical passages of the album, adapted from a past collaboration of the two. “Chapter 3, which I’ve just released, was with Takara, we had this moment of exchange, but then nothing else happened”. Their collaborative track “Entre as Arvores” is a classic piece of modern MPB, a beautiful melody underwritten with a delicately layered arrangement and splashes of electronics. Takara also appears with Quincas Moreira, soundtrack composer, multi-instrumentalist and sound designer, on “Amor a Morar”, a creeping atmospheric piece of chaotic, swirling sounds.

Evidenced from the title, the album deals with erotically charged themes, playing with the Portuguese language (quem ama, mama), and strong pungent words (buceta, borboleta), all mixed with disorienting sound effects. I ask if this overriding theme of eroticism, physical love and physical contact was a reaction to the conservative government currently in charge in Brazil, Iara is not so sure and says it’s more inspired by the isolationist times that we live in. “We’ve been deprived of our sources of pleasure, we can’t go to a show, to a bar. We’re living in a situation of deprivation from our pleasure”. She continues, “It’s a search for the re-encounter to live, the libido is the creative force of life”. Feminine sexuality is important here, “My work doesn’t come from this current wave of feminism, for me this has always been present”, referring to her first band from the early 2000s, Dona Zica, which featured Andreia Dias and Anelis Assumpção, “The women singers were always divas, but we didn’t want to sing about love, we were a band of women, we had our own voice , doing our own thing and singing about pleasure and love and, yes, sex”.

We move onto when we will gather together again and the subject of live shows, it’s a difficult subject. “Under these conditions I don’t feel comfortable inviting people to see a show.” Iara has been collaborating actively on Instagram live with artists like Ava Rocha and Duda Brack, but this experience of live recordings on social media is only partly interesting to her.

“The show has energy that you send out and that the public gives back, this live exchange is severely lacking”. When will she return to public performance? “I would like to do a public experience maybe in December. A public performance with video and poetry, in an open space, a small public, it’s still just an idea”.

Talking about the next year is complicated, cuts in the arts have devastated the cultural landscape. “There’s been a deliberate attack on culture in Brazil, first with cutting the ministry of culture, then the Sistema S (SESC, SENAC and SESI organisations, etc.) and now with Ancine”. Here she’s referring to the Brazilian Cinema agency, who have been in the news recently saying that they cannot meet costs.

Despite these difficulties, and maybe because of these adverse conditions there’s been so many great albums this year, I ask her what she’s been listening to. “Negro Leo, Guilherme Held’s new album, it’s a great meeting of artists, Ilessi, the singer from Rio, Juliana Perdigão’s Duvidas.

We talk about previous projects that Iara created, like her Macunaíma opera, which needed healthy budgets and sponsorship to put together. “To make an album costs money, the opera was sponsored by a project of Petrobras Cultural and so there was money to invite lots of people, record in different studios, but albums like Arco and Flecha were made with no money”. Here she refers to her duo of albums from 2016, Flecha produced with Curumin was made with a male group and Arco was female-led with instrumentalists Mariá Portugal and Maria Beraldo.

Mancunaíma Ópera Tupi is perhaps Iara’s most fully accomplished work. It’s an exuberant musical show of theatre, dance, visual arts and video art, based on the text by Mário de Andrade. “It’s a project that’s bigger than me”, she says.

It’s a project that she’s been working on throughout her career, culminating last year in a set up with 22 people performed at the SESC Vila Mariana. “I have a project that will become a film, it’s a rereading of a rereading of a rereading. It’s another work entirely”. And the money? “Without a doubt sponsorship is harder to get, and also the competition is fiercer, it’s so complex. It’s getting harder, I’m getting fed up with Brazil to tell the truth”.

“But just the fact that I’m able to release this album, this collaboration, I see as a great achievement, an artist like me, under these conditions”.