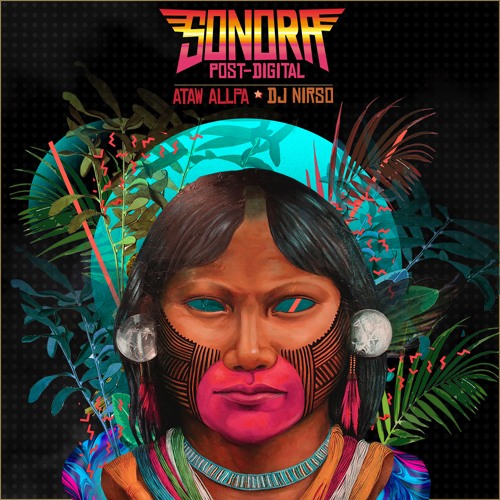 Imagine a post-futuristic landscape. Post-digital if you dare.  Melted at the excesses of human consumption; a plastic gloss amidst a warp of bleeding pixels and bleeping frequencies that etch out vaguely familiar melodies. Can the last avatar to leave the post-digital apocalypse please leave the record playing?

When Quito-based artist Ataw Allpa and Brazilian DJ Nirso met in 2013, it’s unlikely they thought they would end up soundtracking the future. Yet somehow that is exactly where they ended up with their latest release Sonora Post Digital.

Born as a live act the two started out fusing synths, electric guitar and accordions for an electronic take on traditionally-inspired sounds from throughout the continent. It was when the Ecuadorian returned home from São Paolo and the live performances stopped that the album started to take shape. Rather than complicating matters, the logistics of trying to produce an album at distance helping carve out its identity. Spacial guitars and slurring accordions continued to lead the way, yet as the sound was remixed and digitised and further electronic layers and samples added, the digital soon became the post-digital.

The 10-track EP spirals down a musical rabbit hole which incorporates cumbia, and Northern Brazilian forró and carimbó alongside a spectrum of Amazonian-derived influences.

Collaborating its way through the tracklist, the album features artists from across the South American landscape, in the form of remixes, guest vocals and extra production. Brazil’s Uaná System and Catarina Dee Jah and Colombia’s Pablo Diaz all leave their mark, as do remixers Tribilin Sound (Peru), Chilean-based producer Señor Chancho and fellow Quito-based artist Lascivio Bohemia.

Treat yourself to a ride through a South American backdrop, into a digitised fiesta of the future. Listen below or head to the Mishky Records Bandcamp where more post-digital goodness awaits.