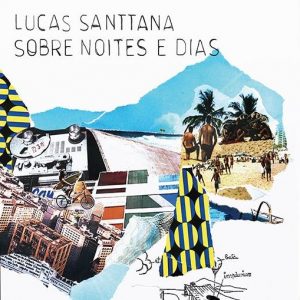 The stylistic concepts that underpinned Lucas Santtana‘s earlier albums have now firmly been pushed to one side. This began with previous album O Deus Que Devasta Mas Tambem Cura (The God Who Devastates Also Cures) but carries on with Sobre Noites E Dias. Santanna’s raison d’être is now to produce inventive cosmopolitan pop that, aside from the fact that the majority of songs are sung in Portuguese, could be emanating from any country around the world.

The album started life on the road, Santtana working closely with his live band of Bruno Buarque and Caetano Malta to craft new songs from loops of guitar, electronic beats and vocal ideas. From that point the tracks were built up with additional instrumentation as well as a raft of guest collaborators, including members of Metá-Metá, string quartet Oslo Strings and a French contingent including rapper Féfé, cellist Vincent Segal and singer/actress Fanny Ardent. On “Funk Dos Bromanticos” he works with Rio’s brega-bass originator Omulu and German DJ/producer Daniel Haaksman for one of the album’s stand-outs. It’s a big dance track, full of strings, funk carioca beats and funky-as-hell guitars, which reveals a new sense of liberty in Brazil with Santtana singing of the gay couples that have become a more visible sight at his concerts.

“Funk Dos Bromanticos” is undoubtedly a track for the dance floor, but there are more serene moments here such as the gentle strum of “Alguem Assopra Ela” or the plaintive piano-led “Velhinho”. This range seems apt considering the album’s title Sobre Noites e Dias translates as “during the days and night”. These are very much tracks that document the various emotions of the day. Other stylistic detours include the discomforting dub and tension of “Blind Date” and the West African-influenced summery pop of “Diary Of A Bike”, which features Féfé on the verse.

Sobre Noites E Dias shows that Santtana is continuing to experiment with his sound, but doing so while refining a broader approach that makes him a contemporary of Thom Yorke, Sébastien Tellier, Beck and other artists who’ve dared to make accessible but progressive music. Santtana is continually sounding less like a musician from Brazil and more like a musician of the world. This is music that should appeal no matter the difference in language or culture.