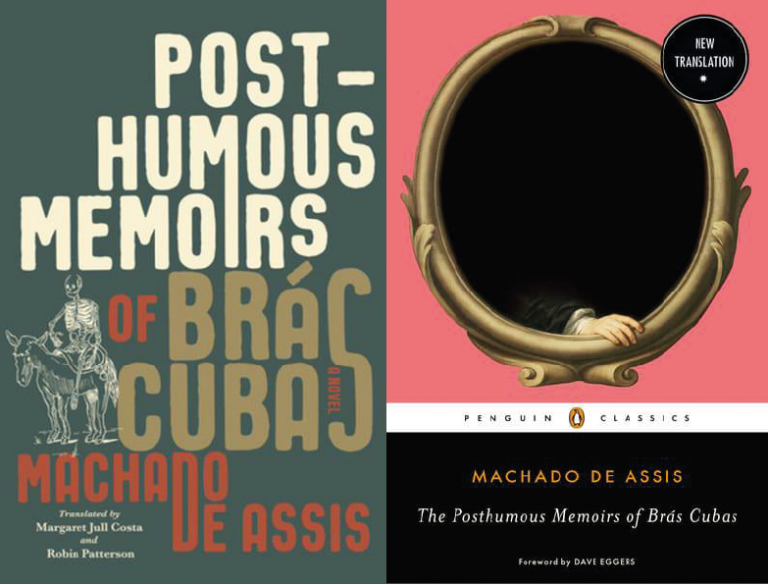 Machado de Assis: An Introduction to One of Brazil’s Most Celebrated Writers

When the topic of 19th century writers comes up, for many, Charles Dickens, Jane Austen, Honoré de Balzac, Leo Tolstoy and Gustave Flaubert spring to mind; and rightly so, they all wrote influential novels and novellas, chronicles and articles that shaped their worlds and the world we live in today. However, this list is neither exhaustive nor complete. Joaquim Maria Machado de Assis, revered by Brazilians as one of the country’s most influential writers, remains relatively unknown outside of the Portuguese-speaking world. In my view, his work deserves a wider international audience, and after being celebrated by Susan Sontag who wrote in 2000 that Machado de Assis was “the greatest writer ever produced in Latin America,” his work has attracted an increasingly international readership with new English translations published recently.

The first of Machado’s novels that I read was The Posthumous Memoirs of Brás Cubas (Memórias póstumas de Brás Cubas, 1881) and as I was reading the first few pages, Machado de Assis’s writing style hit me as being completely different to anything that I had seen previously, and after reading more extensively over the past couple of years, this impression still stands. His characters are outrageous, usually unknowingly privileged and Machado’s descriptions of their reasoning, thought processes and digressions are astounding, authentic and genuinely hilarious. His characters, for the most part, are not overtly malicious nor do they have bad intentions, yet their small-mindedness drives them to underwhelming lives of anticlimactic solitude.

Machado de Assis wrote his later novels in a very different context to our own, a 19th century Brazil that was undergoing a period of self-reflection and nation-building, particularly following the abolition of slavery in 1888. Machado de Assis was a Black Brazilian, and the son of freed slaves at a time when slavery and the Brazilian monarchy were still in living memory. Questions surrounding what it meant to be Brazilian are prevalent in much of the literature of his time. Self-scrutiny and social critique are fundamental pillars of the work of many 19th century European novelists: Galdós, Zola and Dickens all engaged with realism, depicting the world as it was in their respective countries. Machado de Assis certainly depicted the Brazil of his time, albeit in a different fashion; his use of humour and the untrustworthy first-person narrator set him apart from his contemporaries. Equally, his focus on a few fictional members of the upper echelons of Brazilian society, as opposed to the working classes, was also a fundamental part of his later work and distinguishes him from other realists.

Not only are Machado de Assis’ later novels entertaining, exciting, frustrating and bewildering, but they also focus on the day-to-day, with the first-person narrators selectively retelling anecdotes to their audience. The focus on the mundane and the ordinary, with such flair and specificity, is truly wonderful. For example, in his novel Dom Casmurro (1899), Machado’s character Bento describes the experience of sitting on a sofa in immense detail and with such playfulness, that as we read them over a century later, we feel that we are sat right beside the characters in the novel. Such descriptions are dotted around Machado de Assis’ novels, and are crafted with immense precision that we perceive ordinary day-to-day experiences in a new way. Machado’s work transcends generational and temporal boundaries and appreciation for his work has only grown with time. Only this year, two new English translations of his Memórias Póstumas de Brás Cubas (1881) were published.

Reading Machado de Assis’ work has enriched my life, and hopefully this brief introduction to him and his later novels has piqued your interest and inspired you to try one of the books below: