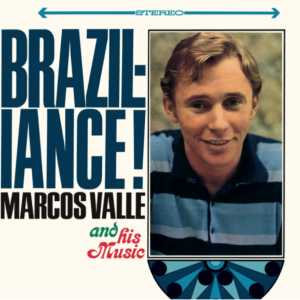 The New Rage of Brazil! suggests the back cover of Mr. Bongo’s re-release of Marcos Valle‘s third album – which was his first to be released in the US (on Warner Bros). The fresh-faced blonde youth smiling diffidently on the front cover sure looks new. Not long out of shorts, one imagines, and barely a whisker on a face that has been bearded now for many a year. The album first came out a long time ago – 1966 in the USA and the following year in Brazil: a testament to the longevity of an artist who, remarkably, doesn’t even merit a mention in the Brazil chapter of the otherwise fairly infallible Rough Guide to World Music. By then, Marcos Valle had already added a pop twist to bossa nova, written two of his most enduring classics, “Os Grilos” and “Samba de Verão” (both of which appear here under their English-language titles of “Crickets Sing for Anamaria” and “So Nice”), and… appeared on Andy Williams’ corny TV variety show. Since it often featured The Osmond Brothers, perhaps we’d better skip that particular claim to fame.

Significantly, the artist is billed on the album as “Marcos Valle and his Music”. The 12 songs, mainly written with his brother Paulo Sérgio, are all instrumentals, all of them arranged by the future superstar, Eumir Deodato. They’re brief, melodic and charming. It’s a confection with strings attached, reminiscent of John Barry perhaps, crossed with Burt Bacharach: the more rhythmic numbers like “Crickets…”, “Batucada Surgiu” and “Vamos Pranchar” are more redolent of the former, while lush tunes like “Seu Encanto”, “Patricinha” and “Dorme Profundo” could easily have derived from the composer of “The Look of Love”. It’s all very much of its time, but with credentials like these, whose complaining? Certainly not followers of this Brazilian Hall-of-Famer. Lifelong fans will want a key album from the days of Marcos Mk1, while more recent converts may, or should, want to explore the artist’s back catalogue.

Braziliance! has been reissued by Mr Bongo Records