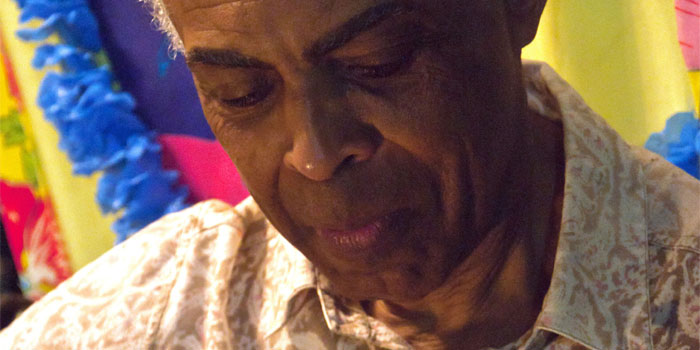 Music Is Pleasure: An Interview with Gilberto Gil

Gilberto Gil is 71 years old, and there are still no signs that he’s ready to slow down. I’d been trying to contact him all year, while he was zig-zagging across Brazil playing tours, while he was on hand to support the Tropicália documentary that he was involved in, and now following the release of Viramundo, a new documentary that follows Gil on a multi-cultural journey around the world. It was for the last of these that I got my chance, hanging on the phone while Gil was being shown around WOMAD (the UK festival which he was about to headline), waiting for a 15-minute gap in his schedule so we could have a chat. Truthfully, I wanted to tell his people that maybe it would be better if he just had a rest, but then these chances don’t come around too often. Plus, as soon as you start talking to Gil you get drawn in by his warmth, as well as the diplomacy that may or not be a result of his time in politics; he made sure he knew my name before the interview and never forgot it during our conversation. In many ways Viramundo portrays Gil as a Global Minister of Multi-Culturality. It’s a role that fits him well.

In Viramundo Gil travels to South Africa and Australia to see how their traditions inform their culture, especially looking at how these countries contrast with Brazil, where ethnic diversity is so heavily reflected in modern culture. It’s this word ‘tradition’ which Gil uses a lot through our conversation. “Tradition has been a very important source of inspiration,” he tells me, “of skills, of technology, means of doing things, constructing processes. It’s been very important, especially in places like Brazil and African countries, Asian countries, Central American countries.”

So, was he surprised by some of the traditions he encountered while making the documentary? “I was kind of surprised by the way the aborigines in Australia have been able to endure and establish their own things despite of the negative things they’ve been exposed to. It’s interesting, they’re brave, brave people”. For him, the situation is very different in Brazil. “It’s alive”, says Gil, talking about folklore in Brazil, “it’s been able to keep the traditional elements but at the same time they’ve [the musicians] been able to dialogue, to develop a very interesting dialogue with modernity, with contemporaneity, with the updating processes as far as technology and languages and processes. It’s a very live part of our cultural system, what we used to call the folk system of the past.”

This mixing of traditional and modern has been a big part of Gil’s work, going back to early songs like “Domingo No Parque” so I wanted to know if his ideas of inclusiveness and socialism have always been there. “That’s something that I’ve been growing up with, this sense of sharing, of being together with other people and having this cultural interchange between nations.” Gil tells me, “it’s not something that I suddenly discovered, no, it’s something that’s accompanied me through my years, at the college, at the university and then when I had my first ideas about socialism and everything. It’s something that’s been following me since my youth.”

When I ask Gil if he thinks that things have improved, whether humanism and socialism have had an impact, he tells me that “we [have to] get to a more balanced social and economical and cultural situation, giving more people opportunities and sharing wealth, cultural, symbolic and material wealth,” adding that this is happening: “it’s a growing tendency in our days.” He sees Brazil has having “a more well-established democratic society today with stronger institutions,” and greater participation from the public. “We have more political consciousness today,” he continues, “we’ve been able to choose better people to represent us as a society in the political game.” But, considering recent protests and the political problems that President Dilma is facing, what does he think are the boundaries that Brazil is currently facing?

“Always there exists historical divides, social divides, economical divides, the slavery thing that we had in the past that we haven’t really been able to get rid of. And the capitalism, the savage capitalism that we still have going on, and even increasing in some terms. All of those are boundaries that are there, that is why we have to keep on moving and keep on trying like the Pope is doing now, getting across the message that the people should keep on trying.” Rather than seeing socialism and capitalism as opposing forces Gil thinks these can live together: “Through capitalism we can motivate people – it has a kind of energy that is important for the system, but at the same time socialism is the horizon, socialism is where we should head to. So both things are important, the socialism as a concept and the capitalism as an instrument.”

Viramundo continues what his music has always done. Without preaching it shows how people from all kinds of backgrounds, whether divided by ethnicity, wealth, geography or class, can make a connection through humanity. In our 15 minute conversation we weren’t able to talk much about his huge musical legacy but I was able to tie in his cultural vision and social ideologies to his day job. As I asked Gil why he thought music was such a good tool for connecting with people suddenly the diplomacy and well-constructed answers were thrown to one side: “Because music is pleasure, it’s instant pleasure. The moment you listen to something, someone singing or playing, meeting some good sounds and everything, you immediately feel good, it’s emotion, your blood current starts to move in a different way, your feelings become more adjusted to reality, music, it’s instant. Music is instant karma.”

Viramundo is in UK cinemas and on VOD Platforms Blinkbox, iTunes, Curzon Home Cinema from 26th July. It will be available on DVD from 5th August 2013. You can find out more information at viramundo-film.com/en