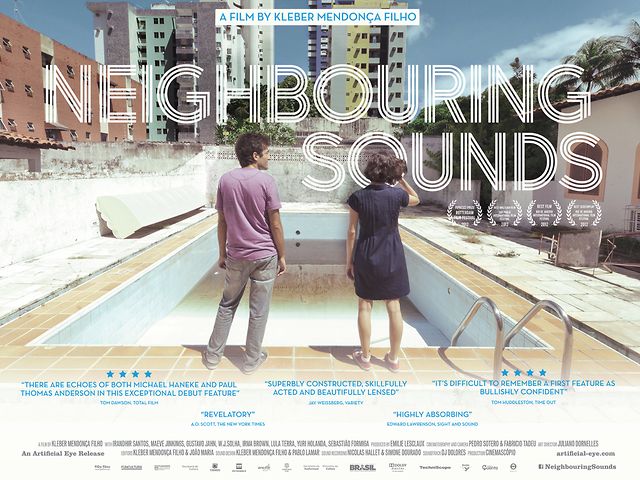 Class relations in upwardly mobile Brazil come to the forefront in writer/director Kleber Mendonça Filho’s precise and promising first feature film. Premiering at last year’s Rotterdam Film Festival, O Som Ao Redor (Neighbouring Sounds) takes place in an upper-middle class neighbourhood in Recife, Brazil’s fifth-largest city, as well as the director’s hometown. The film follows several characters residing in a single city block, a block run primarily by Francisco Oliveira, a patriarch who owns over half the area’s real estate, and the arrival of a private security firm hired to ensure the residents’ safety. The times are clearly changing in this neighbourhood, and there’s not an ounce of doubt that such a transformation provides a ripe landscape for the film’s intentions of heavy social commentary.

One of the block’s middle/upper-class tenants, Beatriz ‘Bia’ Linhares, is an angsty housewife and mother of two children. Early on, she has trouble sleeping due to her barking dog, but it becomes apparent that her anxiety is caused by much more than a pet. She’s a social climber, and throughout the span of a day we see her spend her money on a big screen TV, a private Mandarin tutor for her kids, and some pot for personal use. Her persistent nervousness, annoyance and dissatisfaction are momentarily relieved by bitter comments toward her maid and getting high alone in her bedroom. While she bears her secrets and desires (as many of the block’s residents do), Bia deals with internal tension, and seems to represent a sort of paranoia floating through the community.

João, on the other hand, is the upstanding grandson of Francisco, the patriarch. After waking up with Sofia, an attractive young woman he met the night before, he realizes that someone had broken into her car and stolen her stereo while they slept. He quickly suspects the culprit to be Dinho, his cousin who’s known for committing small, petty crimes for fun around the neighbourhood, and decides to pay him a visit to get the stereo back for her. They reminisce about old times at their grandfather’s sugar mill (the mill that gained Francisco his wealth) before getting to the meat of the discussion.

There are quite a few narratives that don’t develop entirely, such as João and Sofia’s new romantic relationship, or Bia’s trouble with her barking dog, however the action doesn’t really pick up until the arrival of Clodoaldo, a working-class guy who comes into the neighbourhood and offers security on the block from 7pm to 7am everyday for a monthly fee. After obtaining the community’s support, he and his two employees don’t really do much other than linger on the job. They bully a sneaky, but harmless kid from a neighbouring favela and respectfully help a lost Argentinean who left a party to buy more beer, but more-or-less they sit around, shoot the shit, and secretly intimidate Dinho (João’s cousin). Ultimately, though, their arrival not only triggers a rise in nervous energy throughout the block, but it also provokes a revealing turn of events for its residents.

What’s so curious about the entire situation is that director Filho shoots the film in such a way that depicts an environment of physical security, but yet psychological unrest. Physical barriers are built within and throughout the material composition of the scenes: gates, fences, doors, windows, etc. Everything around João, Sofia, Bia, her kids, Francisco, the maids, and the others seems to suggest there is already a sense of stability, surveillance, and protection, which is quite ironic considering the positive reception of Clodoaldo and the need for his group’s presence to ensure the neighbourhood’s “peace of mind.”

These physical barriers and what happens within and around them serve to comment on the levels of social stratification apparent all over the neighbourhood. For example, interactions between João and his longtime maid Mariá and her family, are packed with subtle moments of tension, such as when João comes home to find Mariá’s son sleeping on his couch in the middle of the day. Later on, João’s apartment building has a meeting in which they unsympathetically decide to fire Seu Agenor, an old man who has been working the front desk for over thirteen years, without a severance package. Furthermore, at each residence, whenever anyone enters or leaves, maids are always being told to let people in or out, no matter how illogical the situation.

The urban stacking of apartment buildings and floors (as well as the instruments of security mentioned earlier) generates a feeling that characters can’t quite escape fully from either their past or their present surroundings, and that despite all the “security,” there is no real privacy or peace. There’s still an intense fear hovering, always. On top of that, the presence of night security watchmen doesn’t aid in quelling the deeper psychological angst and paranoia that lingers about through households and back alleys, which begs the question: what are characters like João, Bia, or Francisco truly trying to escape from?

Although most of the story’s incidents feel quite “normal,” you get the sense that someone is constantly watching (a sort of Caché vibe), a feeling suggested by scenes in which characters communicate or share looks across apartment floors, peering out windows or off their balconies. And as sunny and happy as it may seem, the street and its inhabitants carry a weight with them. There’s something happening that we don’t quite know about, something haunting from the past, which lends Neighbouring Sounds its suspenseful quality. Filho manages to maintain a slow yet ever-rising sense of anticipation that culminates into a thematically meaningful, but not-so-impactful final gesture that wraps things up almost too cleanly.

As heavy as this may all sound, the viewing experience doesn’t have to be such. There are plenty of humorous splashes that are subdued and nearly hidden throughout, many of which are so clever they could be hard to catch in the first viewing. This film can be watched as lightly or heavily as you desire, with a variety of different attitudes and viewpoints, however I would recommend adopting at least a perspective available to social subtleties. Sure, it has a slow-moving thriller kind of vibe, with touches of humour, however it can be experienced as much more than that. As the film develops, so does a sort of matrix of meaning around the characters’ relationships, particularly those involving class, race and gender. An accumulation of information surfaces and builds through social interactions that carry heavy implications (of violence, discrimination, historical exploitation, etc.) and gestures exposing a society caught between its past and its present.

That is where the heart of this film really seems to be: it is a web of social-class interactions in a society that is attempting to move forward by forgetting the injustices of its past. In an upwardly mobile neighbourhood full of trepidation, we must ask, “what is this wealth built upon?”

Neighbouring Sounds is available on DVD and Blu-ray