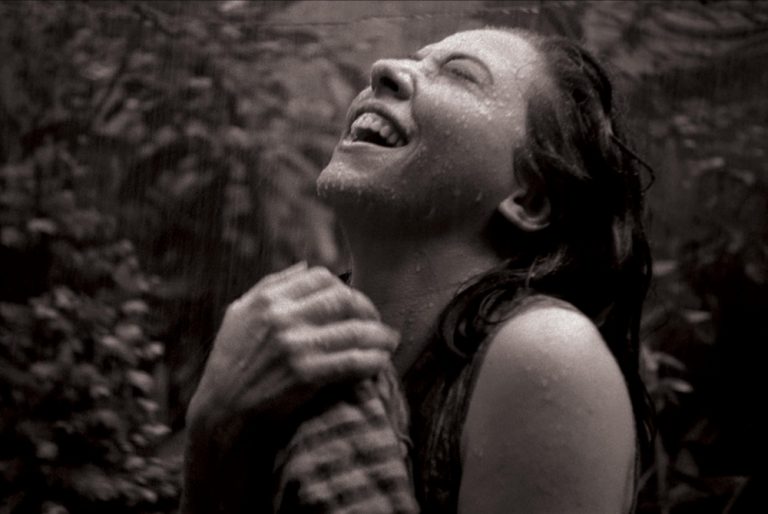 No Fortune Without Blood – Eryk Rocha’s Biopic on Cinema Novo

Cinema Novo begins with people running across a desert, then others running from the police and to catch a bus. It’s a recurring motif in this documentary which aims to capture the spirit of the Cinema Novo movement that offered a Brazilian reality-based alternative to the Hollywood and European art-house films of the 60s and 70s. In quick succession we see a cliff being blasted, and then a man falling from beneath the skirts of a standing woman and beginning to cry like a baby: a scene from Joaquim Pedro de Andrade’s film Macunaíma (1969).

Directed by Eryk Rocha (son of one of the movement’s foremost directors Glauber Rocha), Cinema Novo brings together factual documentary reportage, many sequences from the largely black-and-white, and grainy, films that defined that movement and discussions between the film-makers themselves. As with the movement, the documentary attempts to follow the tricky task of fusing style with message.

When the Cinema Novo movement emerged in the early 60s, directors were committed to left-wing political action, but also constrained by lack of funding, and – influenced by contemporary French and Italian cinema – used real people in towns and villages in preference to professional actors and film sets. At this stage, the Cinema Novo movement was revolutionary in Brazilian cinema, a challenge to the military dictatorship imposed in 1964, and a success at the Cannes Festival in the same year. But after the coup the films became more introspective, reflecting the disappointment among people on the left at their inability to organize. And after 1968, when censorship was introduced, overtly political films could not be shown in cinemas, so their political message became more allegorical and surreal in order to survive. Some directors also began to make more commercial films, concerned about their inability to reach the public.

Perhaps this inability to capture the public’s attention was due to the films’ reputations as being elitist. This is admitted here when Carlos Diegues, one of the film-makers engaged in the movement, says: “Cinema Novo lives a contradiction – the people like what we do, but they won’t go to the cinema to see it”. The discussion continues around the question of how to penetrate the consciousness of the public, given that, “we are up against the majority of the Brazilian people”, who as Glauber Rocha said in his Aesthetics of Hunger essay, “cannot bear to look at their own wretchedness”. The only Cinema Novo film which would become a real box-office success was Macunaíma, which was made in colour with a strong comic element.

Glauber would be criticised for bringing this “wretchedness” to the screen when Antonio das Mortes (1969) was criticised in France on its release for what people found to be gratuitous violence. In this film we see him respond by saying that he could not censor his work when South America is a violent continent, where every day the papers have stories of people murdered with 40 or 50 gunshots or stabs. He points out that the character Corisco in another of his films, Black God, White Devil (1964), was a real person, and that there were many figures like Antonio.

The issue of political and social responsibility is central to the Cinema Novo movement, and their desire to throw off the dominance of mainstream US cinema – encouraged by governments since the 1950s, and happily consumed by the public – and replace it with an authentic reflection of Brazilian life.

On the practical level, the slogan of the movement was ‘a camera in the hand and an idea in the head’, which may also account for the graininess of the footage and for what could be seen as low production values. To the Cinema Novo directors a DIY aesthetic, at least in the first phase of the movement, was important to differentiate their work from that coming from the US, to add to their realist storytelling and also worked well with their budgets. These aesthetics were not a theory per se but something that emerged practically during the filming.

As Glauber Rocha says in the film, Brazilian life demands political films, and not in the Hollywood vein, but films that combine politics with poetry. It is easy to see that this was where the films can be criticised as elitist and over-symbolic, although making political cinema during the dictatorship was not easy.

In Eryk’s film there is a beautiful sequence of a couple discussing the man’s commitment to revolution, where the camera moves around them as they embrace like a living statue, a monument to their commitment, which is soon to be shattered and will see them walk away down two separate railway tracks. The dialogue is extremely literary, from him about his artistic commitment and from her about how she has changed since her youth: “peacefully I give back to the landscape the vomits of experience”. Far from grappling with the problems of everyday life we seem to be in a world of self-absorbed intellectuals, mistaking themselves for historical figures – surely just another symptom of the bourgeois dream.

Then comes a sequence where a woman carrying flowers follows an injured man as he is being carried along a road, and an oration (because that is what it is) about how she will “bring forth poisons, and speeches that will eat away wood, bone and rust… and more and more blood… until the slumber of men, the slumber of time… I will give birth ’til all is poison, a rotten mass…”

Maybe this speech expresses poetically the necessary horror that will come when the lid of bourgeois compromises is finally blown off somewhere over the rainbow.

As this documentary only includes reportage from the era as well as clips from the original film, its aesthetics are very much tied in with the original ideas of the Cinema Novo movement. In a similar fashion to the focus on imagery over narrative in the original movies, Cinema Novo does not reveal the names of the films being featured, nor feature them in any chronological fashion, which means it is not possible to get an idea of how the films evolved as the movement passed through the political convulsions that affected Brazil. This is no standard biopic of Cinema Novo.

Also, if those original films were committed to political change in Brazil, could this film have given more than a nod towards contemporary politics? In the closing minutes we are told – against a backdrop of burning trees and aerial views of deforestation – that “in another 4 years people will understand our films and witness their own reality”. There is “no fortune without blood”, someone says in summary, which is easy to say in a film of course, which is far from the reality of gang wars in the favelas, and environmentalists murdered in the Amazon.

One of Eryk Rocha’s previous documentaries was Jards, a brilliant documentary about musician, actor and writer Jards Macalé. The film exhibited a powerful synergy between the director and the protagonist, who have known each other for decades. It achieved what Cinema Novo falls short of, a synthesis of documentary with the techniques and poetry of Cinema Novo. The present film covers a much wider canvas and deals not just with art but with many political issues, so it may be asking a lot from the director to make a film that is both didactic and illustrative of Cinema Novo style yet still hangs together aesthetically.

I have to say I gained a more positive view of Cinema Novo from reading about it than I did from this film. It has been claimed that the use of structures based on traditional folk tales was intended as a vehicle, to make the political messages more accessible, but this wasn’t something I learned from watching this film.