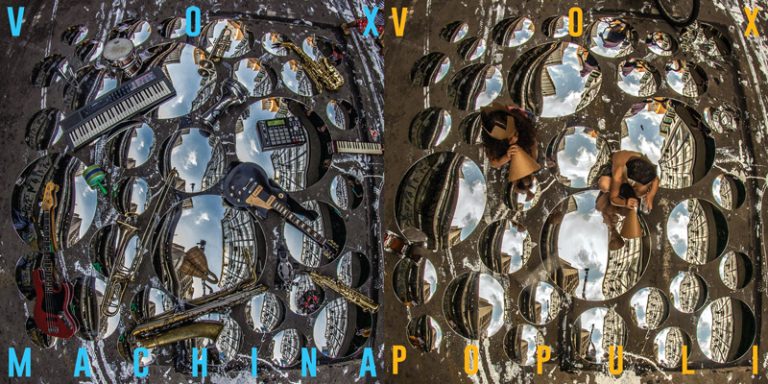 São Paulo’s resident big band don’t normally do things by halves: a 10-piece outfit in an era of austerity, their first eponymous release on the UK’s Far Out Recordings label clocked in at nearly 80 minutes – well over an hour of dramatic music somewhere on the cusp of jazz and a soundtrack to some wide-screen Technicolor film. If their second album, Entre Mundos, was tighter and a tad more consistent, the music was still grandiose in its scope, with the band “between worlds”, exploring a plethora of styles and genres.

This time, though, Nomade Orquestra have done things by halves. Back in June, they released Vox Populi for streaming or download via Bandcamp: eight numbers with guest vocals shared between Edgar, Siba, Juçara Marçal (on “Poeta Pensa”, the pick of the eight) and the man with the magnificent moniker, Russo Passapusso of BaianaSystem. Then in October they followed it up with Vox Machina, eight instrumental versions of the same numbers. Not that you’d necessarily know. They’re far from carbon copies and don’t even share the same titles. Only “Bepolar” and “Constante Mesmice” are easily recognisable siblings. The former’s raging electric guitar and brief dissolution into a chaos of free jazz is refigured by Edgar’s slightly nasal, somewhat vitriolic-sounding vocal. While both are excellent, in general I find myself veering towards the unadulterated numbers of Vox Machina, since it’s the instrumental tracks that showcase more the talents of the musicians than the guests and carry you off into all kinds of imaginary realms.

It’s difficult to pin down either an instantly recognisable Nomadic sound or an obvious modus operandi. The label’s publicity for the debut album speaks of “a mystical land where spaced out jazz soundtracks daily life” and the band itself talks of “the point where different musical expressions and strands meet and interact in a unique way.” A four-piece horn section obviously has a dominant influence: on “Segundo Instante” it creates a Muscle Shoals, southern-soul feel; on “Pinga Fogo” it’s more of a Tower of Power funk vibe; on “Casa de Arvore” there are echoes of a Balkan brass band; while “Céu de Luzita” carries you off to Cuba. But it’s the majesty of the ensemble playing rather than the kind of raw power one associates with the similarly protean Bixiga 70 that points to the orquestra’s elusive USP. Variety, it is certainly their middle name, and rather than attempting to pin down such a slippery, hippery thing, maybe the most instructive way of experiencing what this outfit are all about is to listen to the last track of each half of this particular musical equation – “Poeta Penso” and the sublime “Horizonte Manso” – and just let your imagination wander where it will go.

As yet, plans for a vinyl or CD release in the UK are not known. For now, you can download this richly varied pair and play with the shuffle mode to see where that transports you. Taken together they reinforce the claim that Nomade Orquestra are, as their label contends, “making music like none other in Brazil, or indeed the world”.

Listen to both albums on Nomade Orquestra’s Bandcamp