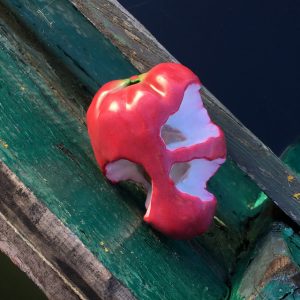 Singer Jaloo and instrumental duo Strobo (Leo Chermont and Arthur Kunz) cook up delicious Brazilian flavours in the debut album of their joint project Os Amantes. Three of the 10 tracks on the album had been previously shown to the public: “Batismo”, “Linda” and “Bye”. They sound even better as part of this witty, effusive work.

Maria Bethânia, Gal Costa, and Caetano Veloso are amongst the group’s inspirations for the album, and they’re felt in each song and in the work as a whole. But Os Amantes, who all hail from Pará, go further than that, encompassing even more genres and influences from Brazilian popular culture, music, and folklore. If the tropicália movement (of which Costa and Veloso were a part of, in the late 1960s) introduced the electric guitar to Brazilian music, Os Amantes bring paraense guitar from guitarrada (the genre, born in the State of Pará, is a combination of other local genres such as carimbó, with merengue, soca, and more).  It can be heard in “Linda” and “Colchão”.

The rich musicality of the State of Pará also informs the beats of “Undererê” (whose name references the popular sertanejo song “Desejo de Amar”), recalling the drum patterns of brega calypso somewhere in the second verse. The rest of the song is a fusion of axé music and the Kraftwerk-type of synthpop that is a huge influence on tecnomelody (the sound appears in “Ninguém” too).

Furthermore, Os Amantes travels to different places and moments of Brazil too, sounding like Luiz Caldas in songs like “Cotijuba”, sampling cantiga de ninar (Brazilian folklore lullabies) such as “Se essa rua fosse minha” in “Preceito”, and echoing the irreverent lyricism of rock’n’roll that took over Brazil in the 1980s, in “Bye”.

Yet, nothing sounds premeditated or over the top. Os Amantes is a miscellany of rhythms and sounds that flow organically and in the most fun way possible.